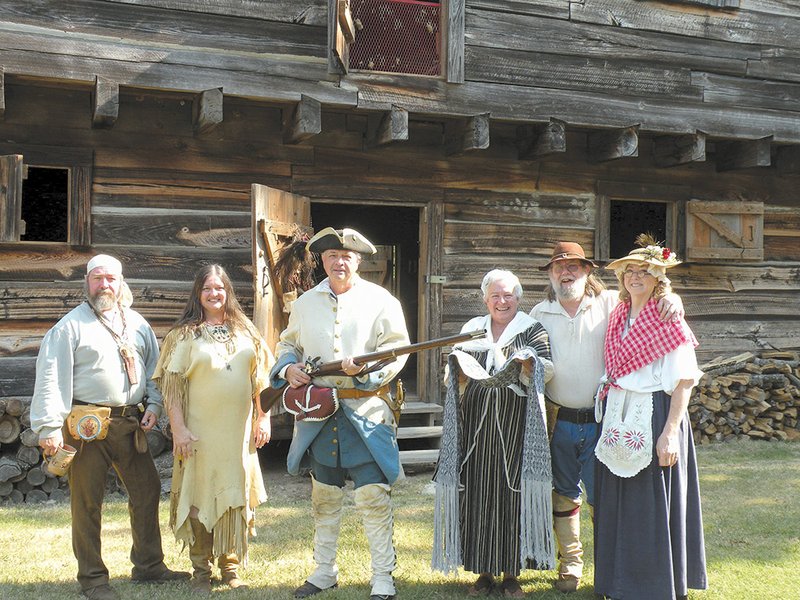 Members of the Early Arkansaw Re-enactors Association will present the Cadronburg Gala from 9 a.m. to 5 p.m. Sept. 14 at Cadron Settlement Park. Shown here in front of the Cadron blockhouse during the group’s recent annual picnic at the park are, from the left, James Thompson, Teresa Lafferty and Ed Williams, all of Little Rock; Ree Walker of Damascus; and Larry and Rita “Scooter” Layne of Sheridan. Williams will participate in the re-enactment of a Revolutionary War battle; Walker will demonstrate weaving techniques, including overshot weaving that she used to make the table runner she is holding; and Scooter Layne will present a children’s tea at Saturday’s event.

CONWAY — Cadron Settlement Park has been the site of many living-history events over the years but for the first time it will be the site of an American Revolutionary War battle re-enactment.

Members of the Early Arkansaw Re-enactors Association and others will bring such a battle to life at 4 p.m. Saturday during this year’s Cadronburg Gala.

Ree Walker of Damascus, a member of the re-enactors association, said the group has been holding special events in September for at least 15 years at Cadron and that last year’s inaugural “gala” included an invitation-only candlelight dinner served in the blockhouse.

“This year, the gala will have something for everyone,” said Walker, who will demonstrate weaving techniques on Saturday.

Ed Williams of Little Rock, a past association president, said the re-enactment will be a “representation” of a skirmish fought on April 17, 1783, at Arkansas Post [known then as Fort Carlos] in Desha County. Referred to as the Colbert Raid, the battle was the only Revolutionary War action in Arkansas and was one of the last skirmishes of the war. Williams said the battle was fought after the war ended and involved British, Spanish and French troops, as well as a few Native Americans and militia from all sides.

Saturday’s event will include re-enactors portraying British and French troops, as well as militia from both sides. Members of the 16th Regiment of Foote from Arkadelphia will portray the British soldiers. Williams, who will portray a French marine, said a group of Spanish re-enactors from Louisiana has been invited, “but we have had no confirmation from them,” he said.

Williams said the artillery used in the re-enactment will be representative of the type of tactical equipment used in the 1700s in Colonial America.

“Those tactics were basically to stand in a line and shoot at each other,” he said.

Williams said the battle re-enactment will last about 30 minutes and involve from five to 15 re-enactors.

Walker said association members will be doing period camping at the park all weekend, adding that the park is not open to the public for camping.

She said the public is invited to activities beginning at 9 a.m. Saturday.

“At 10, my husband, Tom, will present a demonstration on roasting coffee beans. We’ll be cooking as well,” she said.

“Then at noon, I will do a weaving demonstration. I will talk about period weaving, including overshot weaving, which is a technique often used in making a lot of the old coverlets. We will have looms set up, as well, as samples showing various techniques.”

At 2 p.m., Rita “Scooter” Layne of Sheridan will present a children’s tea.

“I will teach etiquette and read nursery rhymes,” Layne said. “I will also have tea available all day for those who wish to partake.”

The Cadronburg Gala will conclude with the American Revolutionary War battle re-enactment at 4 p.m.

Walker said she and the others participate in living-history events because they enjoy history and the skills they learn and then teach.

“We want to educate the public on the history of the area and the state,” she said. “We are just trying to demonstrate history.”

Cadron Settlement Park is open to the public from 10 a.m. to 2 p.m. every second Saturday of the month. The blockhouse is not open to the public except during this time, or for specifically scheduled tours, which may be arranged through the Faulkner County Museum by calling (501) 328-5918.