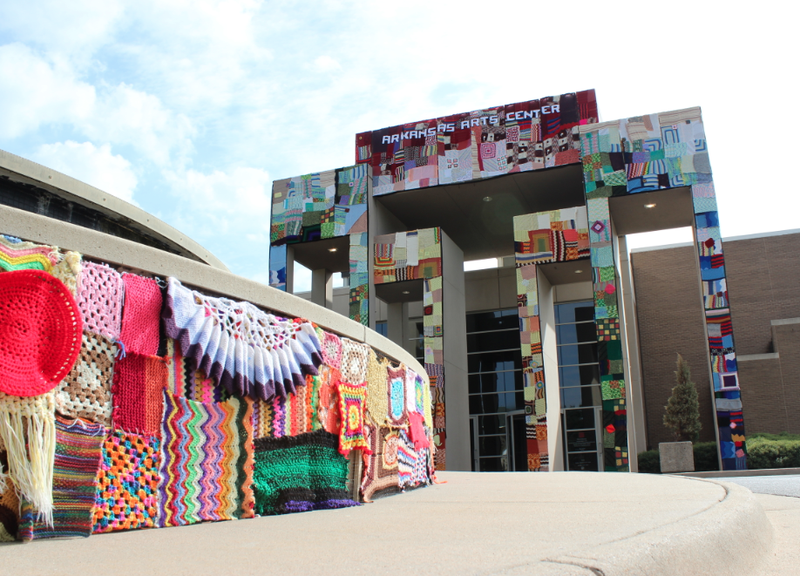 Knitted yarn-work covers the front of the Arkansas Arts Center and its fountain Friday in what organizers say was the second-largest yarn-bombing ever. ( Gavin Lesnick)

The Arkansas Arts Center has officially been yarn-bombed.

A large group of volunteers worked this week to wrap the entire front entrance, surrounding trees and fountain in colorful displays of knitted pieces.

At more than 1,200 square feet of covered space, it's believed to be one of the largest displays of the art technique, popularly called yarn-bombing, ever produced.

Louise Palermo, education director for the center, came up with the idea for the display after seeing a single tree yarn-bombed in Little Rock last year. She then enlisted the help of Chelsye Garrett, an art student at the University of Arkansas at Little Rock who organized public knitting sessions and put out calls for donations to bring it together.

The result, which will remain on display through next month, has already been a hit, Palermo said.

"It's been really amazing," Palermo said "The first day ... this jogger came by and stopped dead in her tracks and went 'Oh my gosh!' That made it all worthwhile. The community response has been amazing."

The large front exterior of the Arkansas Arts Center as well as its fountain and surrounding trees and light-poles have been decorated in yarn in what organizers say is the second-largest ever "yarn-bombing." (By Gavin Lesnick)
[View Full-Size]

Hundreds of artists last month covered the Andy Warhol Bridge in Pittsburgh with yarn, taking that title of largest yarn-bombing ever. And a group in 2008 wrapped an entire gas station in Syracuse, N.Y. with 6,000 square feet of knitted pieces.

Palermo said she's happy to use the colorful outer display to bring more visitors inside, where the yarn-bombing ties into exhibits on interwoven crafts and paper pieces.

"You see weaving, fiber, creative ways that artists have taken this art to its highest form," Palermo said. "And the drawings and the prints in there of woven material is just remarkable."