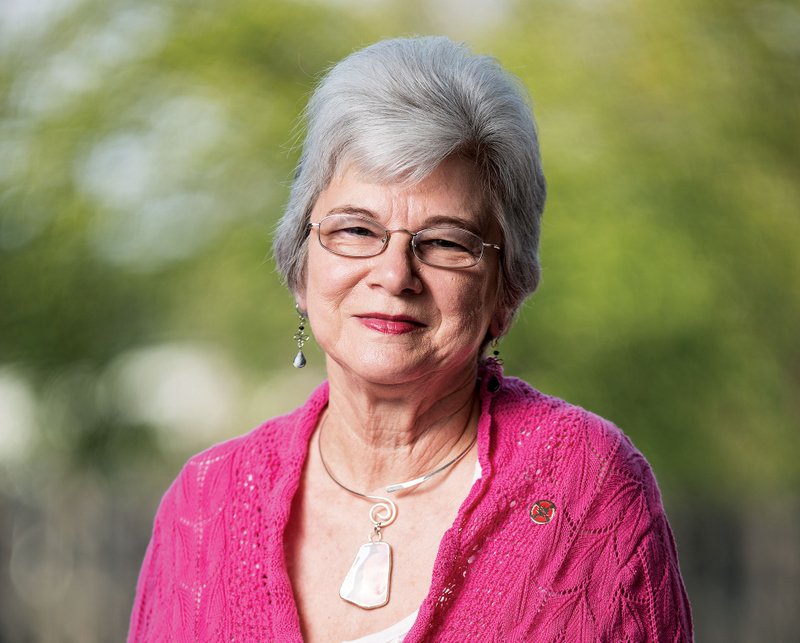 Linda Fullerton of Conway believes that God allowed her to survive a tornado when she was a youngster because of a plan for her. That, Fullerton said, is the Broken China Jewelry project at the Women’s Shelter of Central Arkansas. ( Nick Hillemann)

Linda Fullerton of Conway has memories of surviving the 1947 tornado that killed her aunt and uncle near Pine Bluff when she was 4 1/2 years old — from the three of them hiding under a bed to her waking up outside, rain hitting her face.

The bodies of her relatives, whom she was visiting, were found in the yard. A man surveying the damage found Fullerton lying next to an uprooted tree. She was taken to the hospital, where it was discovered that she had a collapsed lung and lots of scratches but no broken bones.

“I’m kind of thinking God saved me for some-thing, and I think I’ve finally got it figured out,” she said.

That “something” is her mission work, particularly the Women’s Shelter of Central Arkansas and its Broken China Jewelry project.

Fullerton, 70, is coordinator of the project, which has raised thousands of dollars for the shelter in Conway.

The project has brought together women from all walks of life, including many retired teachers like Fullerton.

For all her list of good deeds, from serving as president of Church Women United to activities at Four Winds Church and the women’s shelter, Fullerton’s parents didn’t attend church.

Her mother, however, “was always doing something for people in the neighborhood,” Fullerton said.

After the tornado killed her aunt and uncle, Fullerton’s first cousins, close to her in age, became her sisters.

She graduated from Pine Bluff High School and went to the University of Central Arkansas in Conway to become a home-economics teacher.

“I didn’t know what else to do, and I loved all that kind of stuff,” Fullerton said, referring to cooking and sewing. “I did not know all the science involved.”

At UCA, Fullerton was required to take chemistry and biology, which weren’t her strong suits, but she made it through.

She also met her husband, James, a Searcy native, at UCA. They were married at the Wesley Foundation Chapel on campus 50 years ago on Sept. 1.

Fullerton’s first job was in Marmaduke as a home economics and seventh-grade science teacher, thanks to taking all those courses she had hated. Her husband taught in nearby Paragould at the junior high school.

Later, when she taught career orientation in Searcy, boys took the class, too. Fullerton had to contend with fathers who complained that the skills she taught were for girls. After one young man decorated a cake beautifully, she encouraged him to take it home.

He said he couldn’t — his dad would have a fit.

The Fullertons both furthered their education at Arkansas State University in Jonesboro while they lived nearby. They both have master’s degrees, and she received her certification to be a librarian.

Home-ec teachers, back in the day, got a job and stayed there forever, she said.

“Librarian was not a media job like it is now,” she said. “I had a manual typewriter, and I didn’t know how to use it, really.”

Her husband wanted to get closer to his hometown, so the couple landed positions in Bald Knob. Then she got a job in Searcy, and James later went into school administration.

She was involved in a pilot project for career orientation while in Searcy and was in the classroom for 20 years before becoming a junior-high counselor.

Of her 37 1/2 years in education, she said 30 were spent at Searcy Junior High School.

The Fullertons moved to Jonesboro after they retired, but they missed their two daughters who live in Little Rock.

So the couple moved to Conway about 11 years ago, and Fullerton became involved in Delta Kappa Gamma, a professional organization for women teachers, which she’d joined in Searcy.

She and her husband joined Grace United Methodist Church, too, having gotten involved with church when they were raising their daughters.

It was at Grace United Methodist that she became associated with the Women’s Shelter of Central Arkansas.

As a member of the church’s missions committee, Fuller was given the responsibility of coming up with a project for a missions fair.

At first, Fullerton volunteered 1 1/2 hours a week, taking care of children while their mothers attended meetings at the shelter.

She also taught a knitting class for about three weeks.

“I tried to teach them how to knit a little dish rag. Crocheting would have been easier for the ladies to learn, but I don’t know how to crochet. It’s so amazing when they realize they can do something, that little stitch. It’s an aha moment because they’ve been told they can’t do anything, that they are worthless,” Fullerton said.

As satisfying as teaching the women knitting was, it was too short-lived.

“One and a half hours once a week is not enough to keep my mind and hands occupied,” she said.

A women’s shelter board member had started the Broken China Jewelry project, and Goodrich asked Fullerton to take over coordinating it.

The project was designed as a fundraiser for the shelter, especially to buy supplies for the residents’ art therapy.

Since project started in about 2007, Fullerton said, she estimates that $200,000 has been given to the shelter.

Goodrich said she credits the success of the jewelry project 100 percent to Linda and the volunteers.

“It’s the passion they have for it,” Goodrich said. “If she didn’t believe in it like she does, I don’t think anybody else would. And she’s just a wonderful person.

“God definitely had a purpose for her life. The work she has done on this is no small thing.”

Fullerton goes into teacher mode during the jewelry-making sessions at Four Winds Church, where she is now a member and where Church Women United meets.

She said a core of about 36 women make the jewelry from plates, and about one-third of the group’s members are retired teachers. (They don’t break the plates with a hammer; a tile nipper is used to “cut” the plates into pieces.)

Many of the women involved — statistics say it’s one in four, Fullerton said — have been affected by domestic violence in some way.

“I grew up with domestic violence in my home,” Fullerton said.

She also saw child abuse as a teacher and, especially as a counselor, dealt with it, she said. Now, her knowledge base is domestic-abuse in adults.

“The women [in the group] didn’t know each other, but they have become good friends,” Fullerton

She said it reminds her of how her grandmothers used to get together and quilt, and “they’d just discuss anything and everything about their lives.”

“It’s God’s plan that this has happened like it has,” she said.

Fullerton said that when the project started, she didn’t have a market for the jewelry. She made several pieces and took them to a Delta Kappa Gamma state meeting in Little Rock, where the women bought them “like crazy,” she said. A dance group was staying in the hotel that day, and some of the mothers bought pendants, too, she said.

Now, Fullerton never knows who will call. She has sent jewelry to Alabama and California. One woman ordered 10 pieces but then sent a check for 20 pieces — at $10 each.

“I’ve just met the nicest people over the telephone,” she said.

She also coordinates events where the jewelry can be sold, and the demand for it is still strong.

“We do a tremendous repeat business,” she said.

Fullerton is a walking model for the jewelry — she wears a piece just about every day.

Another group to which Fullerton gives her time is Church Women United, which meets at Four Winds. The nondenominational group is open to any Christian woman, she said, and has five business/planning meetings and four celebrations per year.

Fullerton received the organization’s Valiant Woman Award in May, mostly because of the jewelry project, she said. She’s in her third year as president of the group, too.

“I think that’s what they gave it to me for,” she said.

“My message in Church Women United … is to encourage them and, well, teach them before they’re asked to be an officer. I guess once you’re a teacher, you’re aways a teacher.”