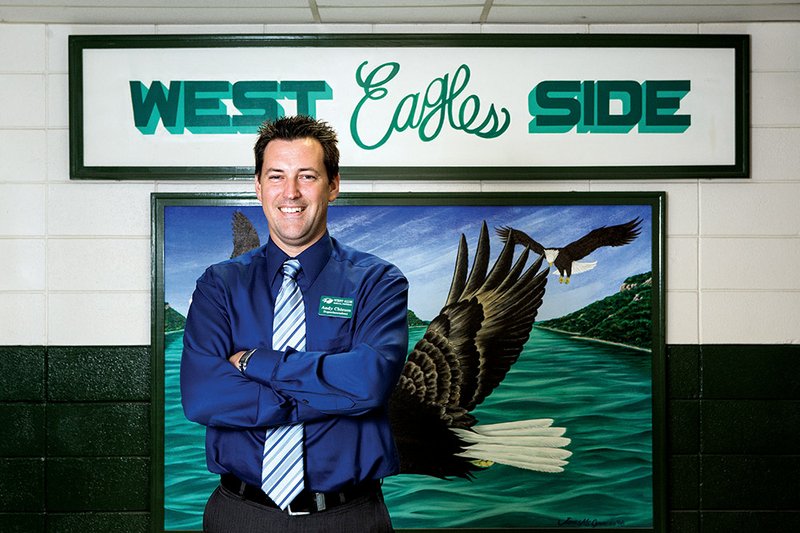 Andy Chisum is the new superintendent of the West Side School District in Greers Ferry. ( Nick Hillemann)

Andy Chisum, the new superintendent of the West Side School District, which covers Cleburne and Van Buren counties, didn’t graduate from college with the intention of going into administration.

“I went to high school in Hector and got my bachelor’s degree at Arkansas Tech [University],” Chisum said. That degree, which he received in 2002, was in health and physical education.

Upon graduation, Chisum went into coaching, which he’d always wanted to do. In addition to coaching, he taught health, physical education and driver’s education.

“I got hired at Dover, and I was the assistant basketball coach,” he said. “My favorite part was being around kids and being a positive role model for them.”

Sports had always played a large role in Chisum’s life, and he played both basketball and baseball in high school.

His first job, at Dover High School, was working as assistant coach along with his former high school basketball coach.

“He made [coaching] look like it was enjoyable,” Chisum said.

He said his coaches in high school inspired him to want to be a coach, and he soon found that he had a passion for it.

“There’s a lot of work that goes into it,” he said.

While he was coaching at Dover, Chisum went back to school at Harding University in Searcy. In 2007, he received a master’s degree in leadership, which prepared him to become a principal.

In 2012, he completed an educational specialist degree, which qualified him to become a superintendent.

As a coach, Chisum was able to see kids learn more skills in their sports each day. He said that during practice, he would stress certain skills to his players over and over, and enjoyed seeing them master those skills.

He also enjoyed serving as a mentor and role model for his players.

“They would come and ask me for advice,” he said. “I love seeing kids [I coached] grow up and be successful. It feels really good.”

“I loved it there, but I was only there for one year,” he said.

After that year, Chisum said he was asked to take the job as principal of Western Yell County High School.

“[The district] was put on fiscal distress the year I got there,” Chisum said. “The teachers and community members were concerned because they didn’t want to lose their school.”

Teachers were concerned that they might lose their jobs, Chisum said. That concern turned out to be unnecessary. He assured them they were still needed. After a year, he was asked to become principal of the entire district.

After serving two years at Western Yell County, he moved into his current position as superintendent of the West Side School District.

“The opportunity opened up, and I was fortunate enough to get it,” Chisum said.

When he interviewed for the superintendent spot, he said the interview involved the community, along with the school board.

“When I was [offered the job], I was really excited,” Chisum said. “My wife wanted to get closer to home, and I couldn’t turn [this job] down.”

Chisum’s wife is from Bryant.

His time as a principal was well spent, Chisum said. The most difficult task for him, he said, was disciplining the students.

He said he would explain to students why they were in trouble, and they cooperated with him most of the time.

“There are always going to be some kids who cause problems, but the kids have been good [for the most part],” Chisum said.

His first day as superintendent was July 1, and he has been hard at work ever since.

Like in any new job, Chisum said, he has goals for himself as a superintendent and for the school district.

“I want to stay financially stable,” he said. “I want to make sure we don’t get into distress in the future.”

He accepted the job at the West Side School District because he cares about students and wants them to have as many opportunities as possible.

“I want to make sure the kids have the opportunity to succeed and are prepared for the future,” Chisum said. “I want this to be a place where kids love to be students here, and employees love to be employed here.”

The district’s central office is based in Greers Ferry, where Chisum is a resident. The district has a total of 440 students, and Chisum said he has been impressed with the staff and students he has come in contact with as superintendent.

“At a small school, the teachers wear many hats,” he said. Some of the teachers, in addition to teaching classes, sponsor a club or coach a team, he said, and Chisum admires that.

“The teachers care about the kids,” he said.

Last year, the district’s total enrollment was 430. This year has shown some growth already, and Chisum looks forward to seeing the numbers grow in the future.

The West Side School District is the largest in Cleburne County, Chisum said.

The people Chisum has met in the community so far have impressed him.

“These people are such hard workers,” he said.

Though he’s enjoying the job of superintendent, Chisum said, there are some parts of his other jobs that he misses on occasion.

“[In this position], I don’t have as much student contact,” he said.

When he was a coach, Chisum said, his teams had a sense of camaraderie.

“We were a pretty tight-knit group,” he said.

Though he’s seen some ups and downs in his coaching and administrative jobs, one thing has remained consistent — positivity.

“I try to be a positive person,” Chisum said.

The superintendent said that if a teacher is worried about her job, that could carry over into her teaching and classroom behavior, and students can and will notice that attitude.

“[The students] are going to carry that attitude home with them,” he said. “If the teachers stay positive, the kids will stay positive.”