Viewers of unfortunate Prisoners will yearn to flee theater by PIERS MARCHANT SPECIAL TO THE DEMOCRAT-GAZETTE | September 20, 2013 at 3:32 a.m. 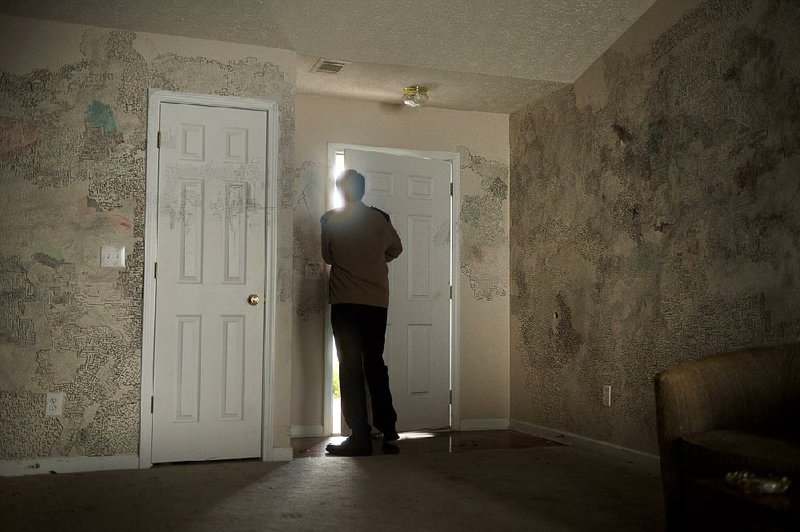 In French-Canadian director Denis Villeneuve’s vision of rural northern Pennsylvania, everyone’s vision is obscured, either by the relentless rain and snow that seems to ceaselessly pound the area, the resulting smudged filth on windshields and windows, or their own furious rage, set to boil when their family is threatened.

Villeneuve, whose previous feature, Incendies, won him much acclaim and an Oscar nomination, makes a point to show the characters’ myopic points of view because, simply put, he wouldn’t have much of a film if they weren’t so shut down. The story concerns the abduction of the two youngest children of a pair of families, who are good friendsin their neighborhood. On the one side, we have Keller Dover (Hugh Jackman), a simmering handyman with a survivalist bent, his wife, Grace (Maria Bello), and teenage son (Dylan Minnette); on the other we have Franklin Birch (Terrence Howard) and his veterinarian wife, Nancy (Viola Davis), along with their teenage daughter (Zoe Soul). When the two little girls (Erin Gerasimvoich and Kyla Drew Simmons) disappear together on Thanksgiving, the families immediately lock onto a battered and rusty RV that was parked just down their street at the time of the abduction.

When Detective Loki (Jake Gyllenhaal, and, yes, the names in this thing are universally ridiculous), the lead investigator in the case, tracks down the RV in a nearby parking lot, the driver attempts a clumsy getaway before being overrun by cops. It turns out it’s a mentally damaged kid named Alex (Paul Dano), who clams up around the cops, but appears to know more about the missing girls than he is letting on. Enraged by what he sees as police inactivity, Keller quickly takes matters in his own hands and kidnaps the hapless Alex shortly after he’s released from custody, in an attempt to beat and torture the truth out of him along with the reluctant Franklin. As you can imagine, things escalate from there, with Keller keeping significant secrets from Loki, even as the detective is drawing ever closer to solving the mystery and finding the girls.

If it sounds vaguely like something out of a Dennis Lehane fever dream, you’re not far off. Unfortunately, screenwriter Aaron Guzikowski also shares Lehane’s penchant for illogical, pockmarked plot twists, guaranteed to leave you gasping in disbelief as much as horror. So many things have to break a very certain way in order for thestory to keep chugging along, at times it feels as if they should have just dispensed with the rest of the dialogue altogether just to make haste to the film’s inevitable conclusion.

Through the morass, there are some fine performances at least. Jackman is again almost certain to lock up Oscar nomination talk with his portrayal of the fiery, remorseless Keller, a man wound so tight and so quick to aggrievement it’s as if he’s already a fully extended spring that never even takes the time to coil. Davis and Bello also acquit themselves well, but Gyllenhaal, long past the dopey-eyed charm of many of his early roles, is the surprising revelation. He’s a young detective with a previously perfect track record, who seems every bit as committed to saving the girls as their morally compromised fathers.

The trouble is no melodramatic stone gets left unturned in the film’s near constant churning for dramatic resonance. It wants desperately to be serious and significant, falling into much the same trap as Clint Eastwood’s loathsome Mystic River, attempting to justify its moody pomp with edgy violence and parental terror to keep you from noticing just how conventionally placed all its ethical markers are.

It’s the kind of movie far too content to ask these Hollywoodized, emotionally stunted questions of morality - how far would you be willing to go in order to save your child? - without ever adding insight or perspective on any of its characters’ choices. Instead, it plays with plot intricacies and rolls through a steady diet of red herrings as if they alone can stand in for the substance this overwrought spectacle lacks.Needless to say, in this, they are sorely mistaken. It’s not enough simply to ask difficult ethical questions; you have to take the time to offer and consider the answers at which you arrive, else you’re just unconscionably play-acting through “a parent’s worst nightmare,” all for the sake of yet another searing drama that signifies absolutely nothing at all.