The number of Arkansas high school students taking challenging Advanced Placement tests and the number of exam scores that qualified students for college credit both reached new highs in 2012-13.

A total of 24,364 Arkansas students took Advanced Placement exams last school year, a 6.6 percent increase over the number of test-takers in 2011-12, according to data released Thursday by the Arkansas Department of Education.

The number of Advanced Placement exams on which Arkansas students earned scores of 3, 4 or 5 rose to 13,298, which is an 8.6 percent increase as compared with the number earned in the previous year. 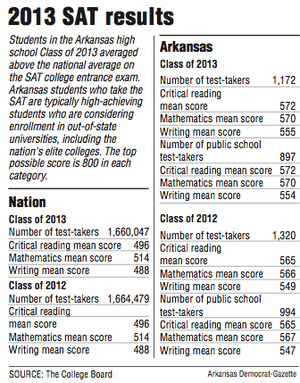 Scores of 3 or better typically qualify high school students for college-credit hours or placement in one or more college courses above freshman entry-level courses. That can mean a savings in college tuition costs for a student, earlier completion of a college degree or both.

Mary Kathryn Stein, the Education Department’s program coordinator for gifted and talented education and Advanced Placement, on Thursday welcomed what is another record-breaking year for the Advanced Placement participation in the state.

“We need the whole state to stand up and take a bow,” Stein said. “It is phenomenal.”

The rise in the number of scores of 3 or better, paired with more students taking the tests, is particularly remarkable, Stein said, adding that it would be far more typical for the number of qualifying scores to stagnate as the number of test-takers increases.

“The state has been paying for the exams and paying for a lot of teacher training in strategies for working with the students so they will be successful on the exams,” Stein said. “That is really making a difference.”

Just 1,172 students in the state’s public and private schools took the SAT exam, earning an average 572 on the critical reading section of the test, an average 570 on the mathematics test and and an average 555 on the writing test.

Those average scores were increases of 4 to 7 points over the results from the Class of 2012.

Arkansas students scored above the national averages on the SAT, just as they have routinely done in the past. The students who take the SAT in Arkansas are those who typically plan to attend out-of-state colleges, including the nation’s elite universities. Most Arkansas students take the ACT college-entrance exam.

A total of 24,364 Arkansas students took 42,545 exams last year, a 7.6 percent increase in the number of exams, according to data from The College Board and the Arkansas Education Department.

In Arkansas, close to one-third of the tests taken - 31 percent - received a score of a 3 or better.

Nationally, 57 percent of the tests taken received a score of a 3 or better.

The number of black students in the state taking the Advanced Placement tests increased by 7 percent this past school year to a total of 3,283. Those students produced 509 tests with scores of 3 or better, an 8.5 percent improvement over the previous year.

Arkansas Education Commissioner Tom Kimbrell said he was pleased with the Arkansas effort in the Advanced Placement program.

“Arkansas has taken great strides to improve not only the number of students taking AP assessments, but the overall scores as well,” Kimbrell said in a prepared statement.

Arkansas students are aided in the Advanced Placement program by Act 2152 of 2005, which authorizes the state to pay the exam fees for the public school students - the only state in the nation to do so, according to Education Department officials.

Picking up the tab for the exams, which are in excess of $80 each, cost the state more than $3 million, Stein said.

Additionally, the state typically rewards schools and districts with $50 for each score of a 3 or higher. That money can be used for teacher training and supplies or even for award money to the successful students.

Stein said the request for that incentive money - which totaled $611,000 for the results in 2011-12 - will go forward now that the annual results have been announced.

The initiative was established with a grant from the Exxon-Mobil Foundation and continues to operate with state funding and grants from the Walton Family Foundation. The initiative provides training to the teachers and Saturday test-preparation sessions for students, as well as financial incentives for scores of 3 or better to both students and teachers.