Many Arkansans reach out for help on final day 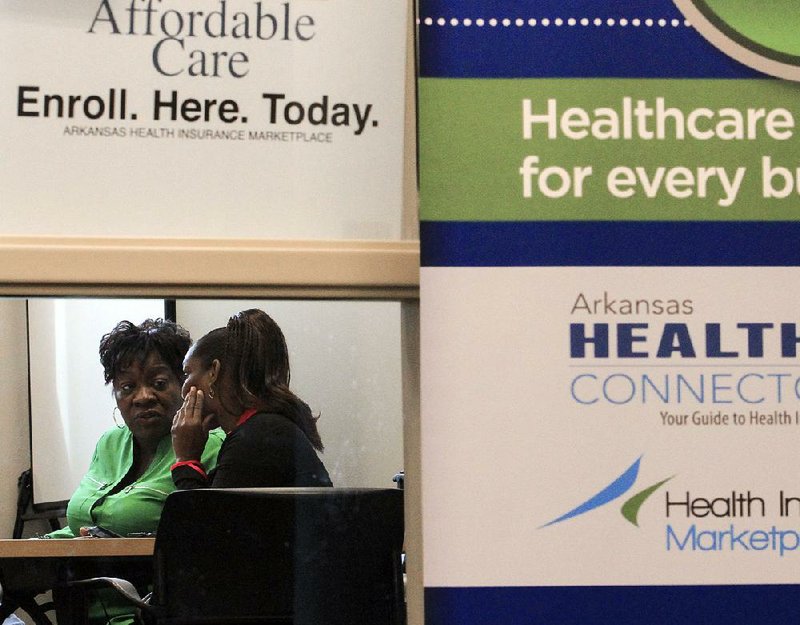 Arkansas Democrat-Gazette/BENJAMIN KRAIN --3/31/2014-- Pamela Abrams, left, an In Person Assistor with Future Builders, assists people at the Laman Library in North Little Rock, with health care provider sign up and questions Monday during the final day of enrollment in the Affordable Health Care Act.

When she went to the First Presbyterian Church in downtown North Little Rock for help signing up for health insurance, Marilyn Miller didn’t realize that Monday was the last day many people could enroll.

The sign-up event at the church was one of several held around the state to help people enroll in an insurance plan ahead of Monday’s 11 p.m. deadline for 2014.

Under the 2010 federal health-care-overhaul law, those who go without insurance for more than three months this year face a potential penalty of up to 1 percent of their income.

Federal officials have said that penalty won’t be assessed against anyone who signed up during the enrollment period that started Oct. 1 and ended Monday, even if their coverage doesn’t kick in until April or May.

About 120 people had gone to the Laman Library in North Little Rock for help with enrollment by late Monday afternoon, said Leonard Stern, an outreach worker with Future Builders, a nonprofit based in southeastern Pulaski County.

The group has been helping people with enrollment at the library every Saturday. Usually, “we’d be glad if we had 10 to 15” people show up, he said.

At First Presbyterian Church in North Little Rock, about 45 people had been helped by about 4 p.m., said Diedra Levi, chief executive of the Living Affected Corp.

The organization is based in the church and, along with Little Rock-based Better Community Development Inc., provided the outreach workers for the event Monday, which was scheduled to last until 10 p.m.

At both events, most who showed up qualified for the state’s expanded Medicaid program, meaning they could have waited until after Monday to sign up, since the deadline didn’t apply to those who qualify for the program.

People who qualify for Medicaid could still face a penalty for having a gap in coverage, but the expanded program covers up to three months of past medical expenses. Recipients will be given credit for that retroactive coverage in determining whether they will face a penalty.

The so-called private option created by the Legislature last year allows most people who qualify under the expanded Medicaid program to sign up for a private plan on the state’s health insurance exchange and have the premium paid by Medicaid.

At the Pat Walker Center for Seniors in Fayetteville, outreach workers helped about 15 people. About half qualified for Medicaid, said Brandie Cooper, an outreach worker with Russellville-based Friendship Community Care.

Healthcare.gov, the federal site that allows users to apply for tax credits to help pay their premiums, was often overwhelmed with traffic Monday. The website sometimes directed users to leave an email address so that they could be contacted when traffic was lighter.

The Arkansas Insurance Department doubled the staff, from four to eight, at its call center, which directs callers to organizations that offer one-on-one help, department spokesman Heather Haywood said. Operators planned to answer calls for an extra 2½ hours, until 7 p.m., she said.

By Monday afternoon, the center had received 416 calls, compared with 587 during all of last week, Haywood said.

Miller said she was covered by insurance from her husband’s job at Afco Steel until he retired last year and became eligible for Medicare. The couple bought a short-term policy that covered her until Dec. 31.

She had submitted an application for Medicaid in January and thought she had been approved. But she had been unsuccessful in trying to use another state website, insureark.org, to choose a plan on the exchange.

With the help of an outreach worker at First Presbyterian Church on Monday, Miller said she learned her income was just over the limit that would qualify for Medicaid. That limit is 138 percent of the poverty level - for instance, $16,105 for an individual, or $32,913 for a family of four.

The outreach worker, Tonya Estell of the Living Affected Corp., encouraged Miller to submit an application through healthcare.gov to see if she would qualify for a tax credit.

The credits are available to those with incomes below 400 percent of the poverty level - for example, $45,960 for an individual or $94,200 for a family of four.

With Estell’s help, Miller found out she did qualify for the credit.

Thanks to the tax credit, however, Miller will pay a premium of less than $10 a month. Subsidies will reduce her deductible to $750.

Print Headline: Many Arkansans reach out for help on final day