Track rides to next level on back of Smarty Jones 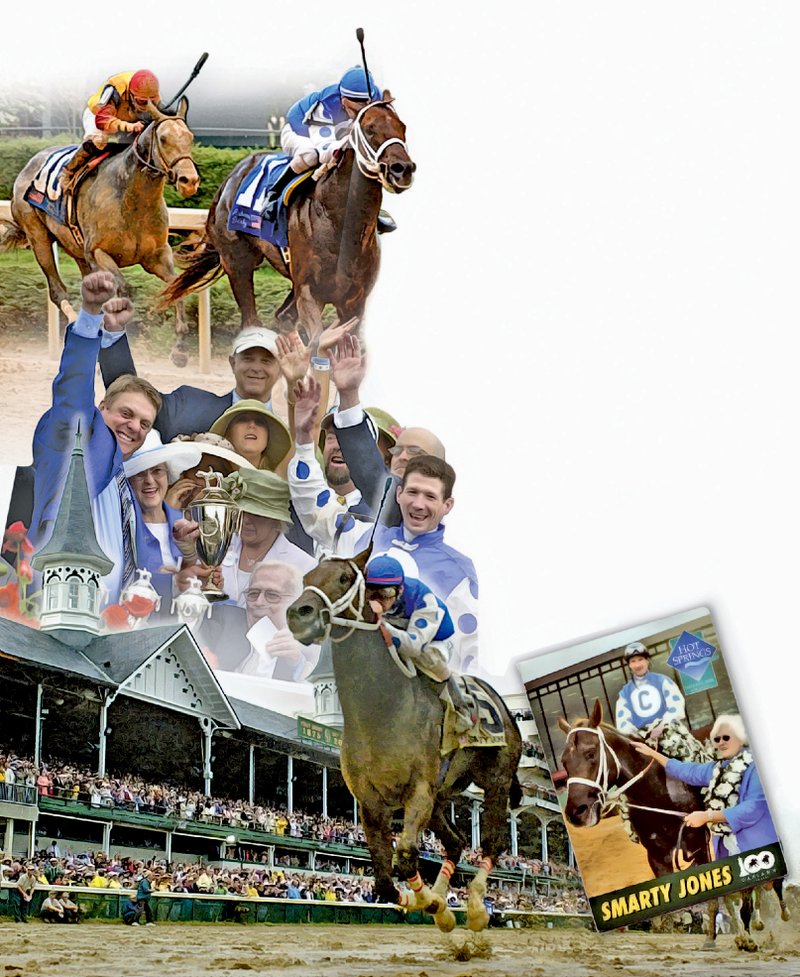 jaw-dropping statement to celebrate Oaklawn’s centennial season, the track had to solve an important math problem.

What year would Oaklawn recognize as its 100th anniversary? After all, Oaklawn’s advertising material is ripe with “Since 1904,” but it’s widely reported the first race wasn’t run until 1905.

Oaklawn, in this instance, decided the answer was 2004. The choice was one of many fortuitous turn of events for the track a decade ago and paved the way for maybe the most memorable season in the lengthy history of Oaklawn, which continues to reap the benefits today.

The bonus, which Cella announced during an Oct. 1, 2003, news conference in Little Rock, would go to any 3-year-old the following year who swept Oaklawn’s Rebel Stakes and Arkansas Derby and the Kentucky Derby, the first leg of racing’s Triple Crown, at Churchill Downs in Louisville, Ky.

“Could not have been scripted any better,” Jackson said. “It was right out of Hollywood.”

Jackson said he and others in Cella’s inner circle were summoned to the owner’s St. Louis-area home and were floored by his centennial pitch.

“The $5 million bonus was over our pay grades,” Jackson said. “That was his idea. We had kicked this thing around for about a year. When Charles said ‘$5 million bonus,’ it just took our breath away. Had no idea it was coming.”

In addition to the centennial bonus, Cella raised the purse of the Arkansas Derby from $500,000 to $1 million - making it the richest race in Oaklawn history and the most lucrative Kentucky Derby prep race along with the Florida Derby - and bumped the purse of two other local 3-year-old stakes events.

“An amazing animal,” said Cella, whose family has owned Oaklawn for more than 100 years.

Bred and owned by Pennsylvania residents Roy and Patricia Chapman, Smarty Jones broke his maiden by 7 3/4 lengths in November 2003 at Philadelphia Park (now Parx) in suburban Philadelphia. He then won the $56,100 Pennsylvania Nursery Stakes, also in front-running fashion, by 15 lengths.

But Smarty Jones’ trip to Arkansas was contingent on how he performed in his 3-year-old debut, the $75,000 Count Fleet Stakes, on Jan. 3, 2004, at Aqueduct in New York. The Count Fleet, at a mile and 70 yards, was the colt’s first race around two turns.

After stumbling at the start, Smarty Jones showed a new dimension - the ability to rate - and drew off to a five length victory.

Smarty Jones headed to Oaklawn, and his stalking style carried him to victories in the Rebel, Arkansas Derby and Kentucky Derby.

Nine days after his Kentucky Derby victory, Cella presented the $5 million check to the Chapmans during a ceremony at Philadelphia Park’s Derby dining room. The colt’s Philadelphia-based trainer and jockey, John Servis and Stewart Elliott, respectively, each received a 10 percent cut of the bonus, $500,000.

Servis, who thought Oaklawn’s route to the Kentucky Derby would be the best fit for Smarty Jones, received the colt after the Chapmans’ trainer, Bobby Camac, was murdered in December 2001.

Roy Chapman was so moved by the check presentation that he ripped the emphysema-driven oxygen tubes from his nostrils and rose from his motorized cart to accept it.

“It was a great thrill for me to kind of hold court with those Eastern guys, telling them how the real world is run,” Cella said with a laugh. “That was a lot of fun.”

Sunny’s Halo (1983) is the only other horse to win the Rebel, Arkansas Derby and Kentucky Derby.

In 1987, Cella offered a $1 million bonus to any horse sweeping the three races. Demons Begone, co-owned by Arkansas lumberman John Ed Anthony, won the Rebel and Arkansas Derby but bled profusely in the Kentucky Derby and was eased on the backstretch as the 2-1 favorite.

Asked if he believed he would be cutting a $5 million check, Cella said, “Oh, God, no.”

But Cella insured $2.5 million of the bonus in the fall of 2003 and the other $2.5 million two days before Smarty Jones ran in the Kentucky Derby.

Cella also joked about “inhouse” insurance, a reference to his bets on Smarty Jones, who paid a generous $10.20 to win as the 4-1 favorite in the Kentucky Derby.

“We insured it every way we could,” Cella said. “But I must say, in the hope of being a sportsman, we all went out to the track and wished him good luck. I wanted to see him win it. It was a wonderful thing, particularly for those that had worked and labored so hard at Oaklawn. This was really the beginning of our next century.”

Cella’s aggressive approach to the 2004 season, and the subsequent success of Smarty Jones, helped make Oaklawn a major player nationally on the Triple Crown trail.

The Arkansas Derby, a Grade I race in 1981-1988, regained that status in 2010. Grade I events are the most prestigious in the country.

Smarty Jones became such a big deal at Oaklawn that the track ran out of money during its 2004 Kentucky Derby Day simulcast ($413,589 was bet to win on the colt at Oaklawn, an astounding 88 percent of the on-site pool).

Jackson said he believes the enormous popularity of Smarty Jones locally factored into Hot Springs voters, in 2005, approving electronic skill-based games to be installed at Oaklawn. The EGS games are fueling some of the country’s highest purses today.

They only figure to go higher following another expansion of EGS space during the off season.

“I think it helped illustrate what we were saying,” Jackson said. “If we had EGS, we could take racing to a higher level. I think Smarty Jones gave us a glimpse of what that higher level is.”

Print Headline: Storybook beginning/Track rides to next level on back of Smarty Jones