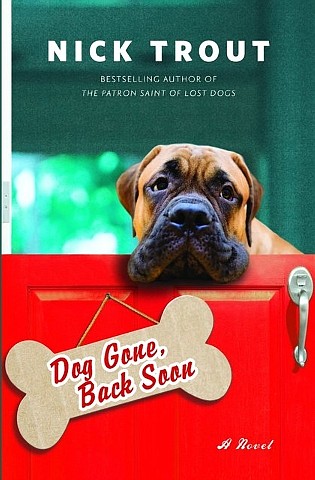 You were sure that everyone was in awe.

There you were, poised, confident and in control. You had a handle on things and you were workin’ it. All eyes were on you, watching, and you were sure they were impressed with the razzle-dazzle you displayed.

And then things went wrong. Horribly, publicly wrong and you went from great to goat in two-point-four seconds. But as you’ll see in the new novel, “Dog Gone, Back Soon” by Nick Trout, things are never as bad as they seem.

Dr. Cyrus Mills didn’t plan on practicing veterinary medicine. No, he was way more comfortable behind a microscope, but when his father died and left him Bedside Manor for Sick Animals in Eden Falls, Vt., Cy had little choice but to take the reins of the shaky business.

He’d had one offer to buy the clinic, but, to Cy, Bedside Manor represented something he wanted from his father, something he needed to understand. Meanwhile, he’d made it clear to Healthy Paws’ general manager that Bedside Manor wasn’t for sale. Cy, though unsure of himself, hoped Eden Falls ’ citizens would support him like they supported his father, rather than patronize a corporate-run chain.

He never figured that Healthy Paws would play dirty.

But aggressive tactics from a rival business weren’t foremost on Cy’s mind.

Days before, he’d gone on a long-anticipated date with lovely Amy, a waitress at Eden Fall’s diner, and it went poorly. Mid-dinner, she’d taken a mysterious phone call that gave Cy reason to believe she was involved with someone else. That was just his luck lately.

And then there were the animals and their owners who needed his help. They took up a good amount of space in Cy’s brain: Tallulah, the mastiff who’d eaten herbal brownies; Marmalade Succabone, a fat cat whose kitty-mama was a lonely divorcee; Ermintrude, a Jersey cow whose mystery disease mirrored that of her owner; and Gilligan, a border collie who was wasting away for no apparent reason. And then there was the man who asked Cy to help him do something unthinkable.

But what was also unthinkable was letting Healthy Paws buy the clinic. Cy’s late father had put his heart into the business and his clients now depended on Cy. Weren’t those reasons enough to keep it?

Pet lovers, grab your bookmarks. There’s a new Big Dog on the shelves, and his name is Nick Trout.

Yes, author Trout will make novel fans and pet owners happy with this somewhat-sequel to his last novel (though this book can be read by itself). In “Dog Gone, Back Soon,” we’re re-acquainted with the introverted, “science-nerd” Cyrus Mills and his neighbors, a gossipy, good-hearted bunch that just want Cy to succeed. That makes this a lightly humorous, sweetly heartwarming tale that’s share-able, comfortably predictable, yet thoroughly enjoyable.