KIEV, Ukraine — Three pro-Russian protesters were killed and 13 injured during an attempted overnight raid on a Ukrainian National Guard base in the Black Sea port of Mariupol, Ukraine's authorities said.

The Interior Ministry said a mob of about 300 people armed with stun grenades and firebombs were involved in the bloodiest episode to date in the confrontation pitting Ukraine's new government in Kiev against an eastern insurgency tacitly supported by Moscow.

Masked and battle-ready militia bearing sophisticated firearms have been deeply involved in seizing government offices in eastern Ukraine, igniting suspicions that much of the unrest is being stirred with Russia's backing.

"It's all nonsense, there are no special units, special forces or instructors there," Putin said.

He did admit — for the first time — that the troops in unmarked uniforms who had captured Ukraine's Crimean Peninsula before its annexation last month by Moscow were Russian soldiers.

Putin also expressed hope that four-way talks between Ukraine, the U.S., the European Union and Russia in Geneva on Thursday could map a way out of the deepening security crisis. 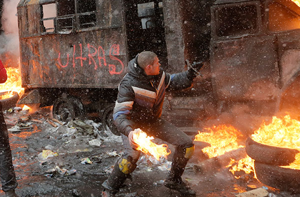