Private-option tab at $496 per client 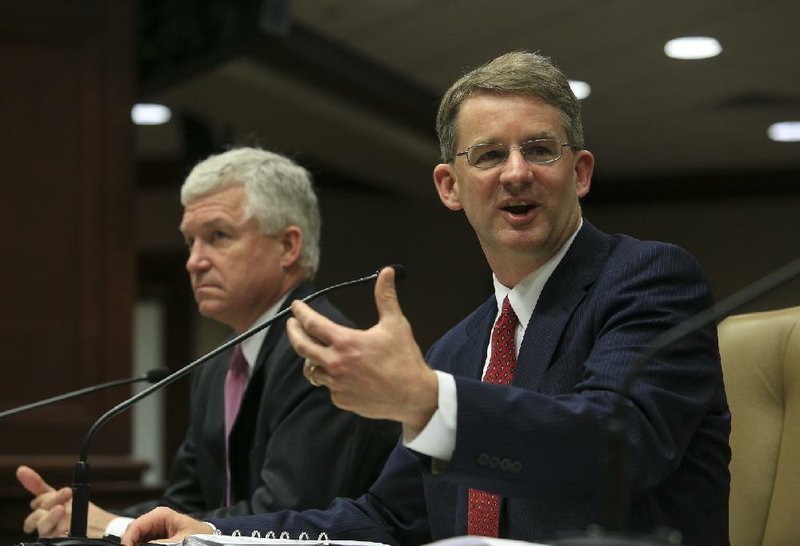 The cost of providing coverage to Medicaid recipients under Arkansas’ so-called private option has continued to rise, with the state paying insurance companies just over $490 per client in premiums and cost-sharing subsidies this month.

Also, Arkansas Medicaid Director Andy Allison clarified Wednesday that the state’s per-enrollee cost includes about $6 a month that the state pays to provide “wraparound” benefits, including nonemergency medical transportation, that aren’t provided by private plans on the state’s health-insurance exchange.

That means the per-enrollee cost of the program is about $496 - about $18 higher than the monthly cap set for 2014 under the terms of a waiver from the federal Centers for Medicare and Medicaid Services.

According to the waiver’s terms, if the state’s per-enrollee cost during a three year period is higher than the cap, the state will owe the difference to the federal government.

But the terms of the waiver also allow the state to request that the spending caps be adjusted if it has information indicating that they “may underestimate the actual costs of medical assistance for the new adult group.”

“It does appear that an adjustment is warranted,” Allison said.

Allison said the state could seek an increase in the cap to reflect the fact that the average age of the enrollees is higher than expected, resulting in the Medicaid program paying higher premiums.

He added that he still expects the program to meet its goal of keeping costs low by fostering competition among private insurance companies.

“I remain confident about the capacity of this program to meet budget, our ability to adjust that budget if we need to, and [am] actually pretty optimistic that we’ll do even better than that in the next two years,” Allison said.

Under the private option, created by a law the state Legislature passed last year, most Arkansans who qualify for the state’s expanded Medicaid program receive coverage through plans offered in the state’s insurance exchange.

The expansion extended eligibility to adults with incomes of up to 138 percent of the poverty level: $16,105 for an individual or $32,913 for a family of four.

In addition to paying the premiums for the plans, the state makes upfront payments, based on an estimate of recipients’ expected claims, to reduce or eliminate any required out-of-pocket spending by the enrollee for medical expenses.

The state also pays directly for the wraparound benefits.

If spending for the program is kept under the caps, the federal government is expected to pay the full cost of providing coverage through 2016. After that, the state would be required to pay 5 percent of the cost. The state’s share would then rise every year until it reaches 10 percent in 2020.

Allison said the actuaries for the Human Services Department are studying why the costs for the program have exceeded projections.

In addition to the higher average age of the enrollees, he said, one reason for the higher costs is that a growing percentage of clients have been selecting their own plans instead of allowing the Human Services Department to automatically assign them.

Many who select their own plans are choosing plans offered by St. Louis-based Centene Corp. that have higher-than-average premiums and include adult vision and dental benefits.

While the average age of enrollees appears to be falling, the average premium price may not fall if more clients continue to choose the more expensive plans, Allison said.

According to an Insurance Department bulletin issued to insurance companies this week, plans available to private-option enrollees next year can include only “essential health benefits” - those that are in the benchmark plan adopted by the state in 2012, as well as additional benefits mandated by the Legislature. Those benefits do not include adult vision and dental coverage.

Allison added that because average enrollment will be greater in 2015 and 2016, those years will weigh more heavily when the state’s overall costs are calculated.

“The main issue has been, continues to be, and will be the trend in premiums over time, and whether the private option can foster competition and pressure on price and quality to keep the increase in premiums to a minimum each year,” Allison said.

State Sen. David Sanders, R-Little Rock, a sponsor of the legislation creating the private option, said the state’s cost for this year could end up being reduced if clients have lower-than-expected medical expenses.

Under the federal health-care law, insurance companies that spend less than 80 percent of the premiums collected on medical care must refund the difference to the policyholder.

“I think there’s a possibility that we will see some money that is put back into those policies,” Sanders said.

He said he also expects planned changes in the program to help reduce costs.

For instance, the legislation authorizing the spending of federal funds for the private option during the fiscal year that starts July 1 requires the state to secure approval to establish its own nonemergency medical transportation program, requires co-payments or other charges to be paid by certain enrollees, and allows enrollees to establish health savings accounts.

The focus on keeping the cost below a target is part of the value of the program, he added.

If that doesn’t happen, he said, “we might have to completely scrap the program and take a look at doing something completely different.”

“If we don’t feel like we can make it work, or we feel like it won’t work, you’ll see a lot more push-back than you’ve seen in the past,” Meeks said.