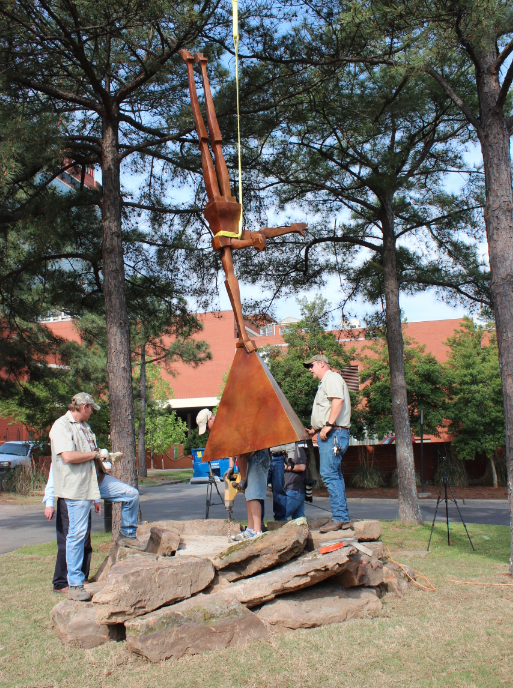 Crews work to install "Cecil," a new sculpture of a man doing a one-armed handstand, Thursday at Riverfront Park in Little Rock.

A 16-foot tall sculpture of a man doing a one-armed handstand was carefully lowered into place Thursday in Little Rock's Riverfront Park.

The piece by Colorado artist Wayne Salge was one of two new additions to the popular riverfront sculpture collection before this weekend's Sculpture at the River Market show. Also debuting Thursday at the park was a new "splash pad" for children up to 5 years old. It opens to the public this weekend.

Salge, 72, watched as crews removed the cast-bronze piece from a trailer bed with a utility truck, carefully moving it onto a rock-encased concrete slab set for it in the middle of a roundabout near the entrance to the Vogel Schwartz Scultpure Garden.

"You're always concerned about it when you have it shipped across the country from Colorado that it's going to be damaged, but it came in in good shape, so it's kind of a relief," Salge said, adding he'll stay in town for the show and get a sense of what people think of his work.

"It's always nice to see reactions — good and bad," he said with a laugh.

Salge, who has been a full-time sculptor for about 17 years, said he was commissioned to do the piece, called "Cecil," after making a smaller version that appeared in last year's sculpture show.

This year's much larger version has a figure who stands 12-feet tall and handstands on a 4-foot triangular base.

"It's to show balance," he said, "in kind of a fun look of a guy doing something that might be impossible but is doing it anyway."

The splash pad, which is in the children’s play area of the sculpture garden, was built with contributions from Little Rock businessmen John Burkhalter and Wayne Woods.

“Riverfront Park is a very popular place year round," Mayor Mark Stodola said in a statement. "At the same time, we all know how hot the spring and summers can be in Arkansas. Having this splash pad for children and their families will attract even more people to Riverfront Park to not only enjoy it, but also the many other features of the Sculpture Garden and the entire park.”