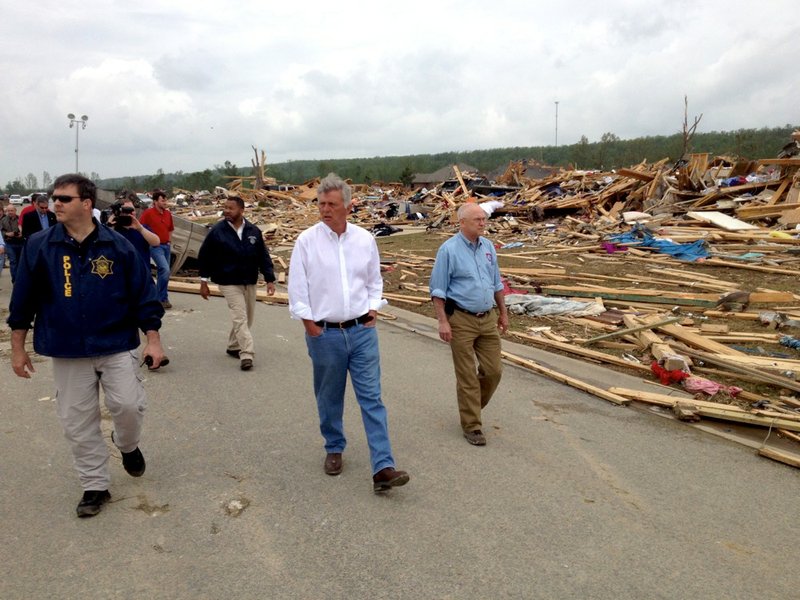 Gov. Mike Beebe tours Vilonia on Monday, April 28, 2014, the day after the town was ravaged by a tornado.

Officials said Monday that at least 15 people have died as a result of Sunday's storms.

The names of those who died — provided late Monday afternoon by Faulkner County and White County officials and a relative of the victims in Paron — is available here.

Faulkner County authorities said that a curfew will be put in place Monday night for residents who were affected by Sunday's tornado in Mayflower and Vilonia.

Angela Patterson, a business office worker at Mayflower City Hall, said a city-wide curfew will be enforced from 7 p.m. Monday through 7 a.m. Tuesday in Mayflower and Vilonia.

Patterson said the curfew is being put in place to "keep people in their homes and outsiders from coming in."

All non-residents except for official emergency personnel have been asked to leave those areas by 7 p.m.

Faulkner County spokesman David Hogue added that the curfew will allow emergency crews to continue working in the damaged areas.

The tornado that left a path of immense destruction through part of central Arkansas Sunday reduced structures to rubble with a force Gov. Mike Beebe says he can't recall seeing before.

Beebe spoke to reporters about the damage (VIDEO) after touring devastated areas of Vilonia.

"I think it's the most powerful one I've seen in terms of the force of it," Beebe said, noting the National Weather Service has not yet completed a survey that will determine for a fact the strength of the tornado. "I don't know if we've had an EF4 or 5 since I've been governor, although we've had a lot of tornadoes. It wouldn't surprise me if this was on the upper end of the scale."

Beebe's tour in Vilonia included the Park Meadows subdivision where dozens of homes were obliterated by the powerful winds.

"We saw damage to structures in a way that I don't think I've seen before in terms of just the sheer force of what that tornado did to steel," Beebe said. "Steel and concrete. We're talking about brick homes that were flattened. Not just mobile homes and other things that are more susceptible to the wind."

Beebe said he did not know how many people were treated for injuries in the storm or how many people remain unaccounted for. Search and rescue efforts were ongoing early Monday afternoon.

The death toll, which had been 16, was revised downward after officials determined two people have been "double-counted" in Pulaski County, Beebe said. He cautioned, though, that it could rise again as search crews comb through additional wreckage.

"Officially it's 14, but there's a reasonable chance it'll go higher," he said.

In White County, authorities identified one person who died there as 55-year-old El Paso resident Paula R. Blakemore. Several other minor injuries were reported in that area as the storm moved through.

Gov. Mike Beebe on Monday afternoon said the state death toll has been revised down to 14 from the previous tally of 16, as two people had been counted twice. The two double-counted were in Pulaski County, Beebe said.

Beebe is expected to speak in Vilonia shortly.

A Faulkner County official says a thorough search effort will continue through nightfall in Mayflower and Vilonia after a devastating tornado killed at least 10 people in the county and leveled dozens of homes and businesses.

Crews conducted a quick search of the damaged areas Sunday night and were returning for a more thorough look Monday. Hogue said officials hope to find survivors but the death toll may grow.

"I wouldn't be so negative as to say that, I hope not, but it's entirely possible," he told reporters in a parking lot in the heart of the Vilonia devastation.

It wasn't clear how many people are unaccounted for, how many were injured or how many homes were damaged or destroyed. At least 60 were at least heavily damaged in Mayflower, Hogue said.

Vilonia, meanwhile, also suffered vast devastation. And it came almost three years to the day after a deadly EF2 tornado struck the city.

"The really sad thing is there is a lot of homes that were hit this time and demolished that were the exact same homes that had just been rebuilt from the last tornado," Hogue said.

Law enforcement perimeters are set up in both Vilonia and Mayflower and authorities are not letting anyone in. Even volunteers wanting to help need to hold back for now, Hogue said.

National Weather Service are sending two teams Monday morning to survey storm damage. The teams will start at Mayflower and then diverge, with one heading southwest and the other going northeast, meteorologist John Robinson said.

Officials say it is unlikely a determination about the EF rating will be made today, as it will be difficult to finish surveying the entire storm track that quickly.

Interstate 40 into Little Rock was at a standstill south of Conway while crews continued to clean up from the Sunday tornado in Mayflower.

Debris was still visible off the side of I-40, including at least one overturned truck. Traffic was extremely slow through the area in both directions, but the backup was more significant coming from Conway.

Mayflower remained closed to all traffic at Arkansas 365 on Monday morning while crews worked in the aftermath of a tornado that devastated the Faulkner County city.

Police stopped drivers near the city's downtown west of Interstate 40 from accessing a stretch of Mayflower where multiple structures were destroyed. Steel frames of large buildings wrapped in debris were visible from the highway.

On the east side of I-40, the tornado's strength was evident at Mayflower RV on Interstate Drive. The dealership was completely destroyed, with RVs tangled into a billboard and thrown into nearby woods and service bays reduced to piles of mangled rubble.

No one was injured there. An employee on the property surveying damage Monday morning said three people who stayed on the property — two in a mobile home and one in an RV — made it to a basement inside a building that was destroyed and escaped unhurt.

At least 16 people have died in a tornado that touched down in Pulaski County on Sunday and then moved northeast, leveling homes in Mayflower and Vilonia in a lengthy path of destruction, authorities confirmed Monday.

Five deaths were reported in Pulaski County, where the tornado first touched down in the Brush Mountain Trail area east of Paron off Kanis Road.

The tornado then continued northeast into Faulkner County, where at least 10 people were killed.

In Mayflower, the tornado destroyed structures and toppled tractor-trailers along Arkansas 365 before crossing Interstate 40, damaging or overturning numerous vehicles there, and then hitting Vilonia. Extensive damage was reported there almost three years to the day after a tornado killed four people in the Faulkner County city.

One person, meanwhile, was reported killed in White County, the Arkansas Department of Emergency Management said.

Search crews were said to be working through the night in the affected areas, going door-to-door in the damaged areas. Shelters, meanwhile, were set up at Mayflower Middle School, Antioch Church in Conway, Beryl Baptist Church in Vilonia and Ferncliff Camp and Conference Center in Little Rock. 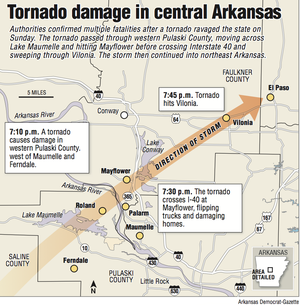 • The Red Cross is accepting donations as it helps tornado victims at its website, RedCross.org; or by texting "redcross" to 90999 to make a $10 donation to disaster relief through your mobile carrier. Charges will apply to next month's cellphone bill.

• The Salvation Army is seeking donations as it mobilizes volunteers and supplies.

• The One Inc., which operates The Van, Mission Machine and more, is collecting donations here: theoneinc.org/donations.

• United Methodists of Arkansas are taking up disaster-response donations online.

• Mosaic Church, with branches in Little Rock and Conway, says it has several families affected by the tornadoes and is collecting "tornado relief fund" donations.

Videos taken around central Arkansas in the aftermath of a devastating tornado that ripped through the area April 27, 2014.