'Guardians of the Galaxy' 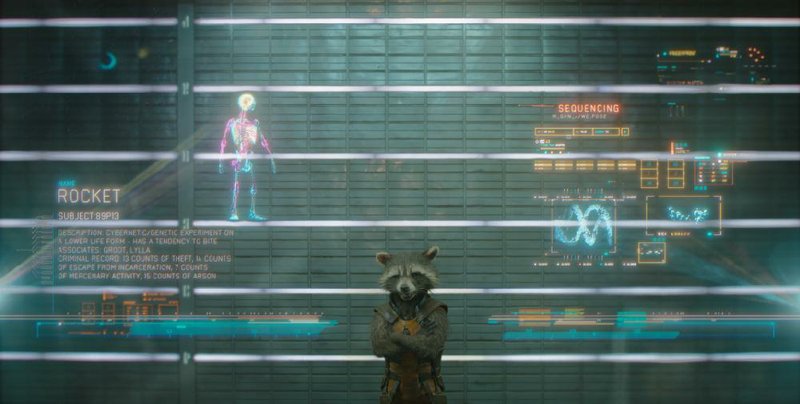 Rocket Raccoon (voice of Bradley Cooper) is a super-intelligent, medium-size, anthropomorphous mammal who carries a gun in James Gunn’s Guardians of the Galaxy.

Whereas Marvel Studios has had a pretty enviable track record lo these past few years (highlights include The Avengers, both Captain America flicks, and of course, the wildly successful Iron Man trilogy), many pundits and fanboys thought this film, based on a more obscure comics series of mostly random, resuscitated characters from Marvel's vast back catalog, would be their Waterloo, a bridge too far, a reach far exceeding their grasp. How in the hell do you invest a reported $170 million in a film that has virtually no established fan base in this day and age?

Before the film actually screened, there was a fairly low hum of disapproval, disbelief and disparagement from the fanboy community. The early trailers captured the film's comic sensibilities but little else, and the fact that the movie stars, among others, a giant, walking plant and his best buddy, an angry, weapons-toting raccoon with a thirst for danger seemed so random as to be easily discounted, another Sprint Framily Plan gone to hell. But what the trailers couldn't show you, what Marvel kept smartly close to the vest amid

Guardians of the Galaxy

Rating: PG-13, for intense sequences of sci-fi violence and action, and for some language

all the downplaying and naysaying, was their secret weapon: The visual and comic sensibility of director James Gunn, who has hewn a fun-fueled spectacular, just in time to rescue an otherwise dismal cinematic summer.

To begin with, you have to appreciate a film of intergalactic comic book heroes in which the protagonists refer to themselves in the course of things as "idiots," "morons," and other, more vulgar terms. It says something about the tone of the film, masterfully crafted by Gunn, and working from an exhilarating script he co-wrote with Nicole Perlman, that it can shift so effortlessly between droll self-effacement, heady dramatic action, and oddly touching emotional uplift. In fact, given Marvel's track record of coloring more or less inside the lines with its major action heroes (although Joss Whedon's Avengers certainly had a sense of humor), it is easily their most daring -- and thrilling -- enterprise.

Just how daring? During the climax of the film, in the midst of its absolute action pinnacle, the evil overlord villain about to lay waste to a planet of innocents, is dared by one of our heroes ... to a dance-off. He doesn't end up actually accepting the challenge, but it is enough that the very concept of the premise stops him cold and leaves him perplexed.

The story involves the future dance-off challenger, Peter Quill (Chris Pratt), abducted from Earth as a young boy on the night his beloved mother loses her battle with cancer. Years later, Quill, who likes to refer to himself as "Star-lord," although no one else seems to, is a ravenger -- essentially an interstellar thief, landing on distant planets, stealing ancient artifacts and selling them to the highest bidder. One such item, an odd metallic orb he swipes from a decimated ghost planet, actually turns out to contain an Infinity Gem, the rarest of all precious stones, that wields almost unlimited power (also a bit of a McGuffin that should sound plenty familiar to Avengers fans), and the theft earns the wrath of the evil Kree despot Ronan (Lee Pace), a warrior fully committed to continue the Kree empire, despite existing peace treaties to the contrary.

Eventually, Quill gets thrown in prison for his trouble, along with bounty hunters Rocket (the aforementioned genetically modified raccoon, voiced by Bradley Cooper); Groot (an amiable walking plant, voiced by Vin Diesel); Gamora (Zoe Saldana), a "living weapon" green-tinted warrior; and the estimable Drax the Destroyer (Dave Bautista), a mountain of a man who thirsts to avenge his murdered family, executed by Ronan during an earlier campaign.

As these things tend to happen, the five eventually band together to break out of jail and take on Ronan, all while protecting precious Xandar, a peaceful world that houses the working government for the whole solar system, even as Quill's first benefactor, Yondu Udonta (Michael Rooker), a fellow ravenger and Quill's erstwhile mentor, tracks down his former pupil in order to steal the gem for himself.

As odd a team as the group may appear to be, the characters' chemistry quickly becomes a major selling point. Rocket is feisty to a fault, prone to take great offense at being treated like an domesticated animal; Drax comes from a race of brawling literalists (imagine a world of incredibly muscular 8-and 9-year-olds and you get the idea) and he doesn't understand sarcasm or figurative language; Groot says only the words "I am Groot" but in such a way that you get his meaning; and Quill himself, who has a penchant for power ballads from throughout our era ("Awesome Mix" it says on the cassette tape label), whose infectious beats resonate throughout the soundtrack (at times, it feels as if the film is little more than an excuse to pump "Hooked on a Feeling" and "Cherry Bomb" through its action set-tos, like something out of an intergalactic Big Chill).

What the early negative buzz about the film also failed to perceive is just how much damn fun the whole thing is. Like Whedon's golden touch, Gunn's twisted moments of humor -- which can come at any time, no matter how melodramatic the setting -- give the film an enjoyable herky-jerky looseness, like a drunken aunt who is able to turn an interminable family Thanksgiving dinner into something resembling a good time party. It certainly plays to the film's strength that the art direction, under Ray Chan and several others, and the cinematography, expertly handled by Ben Davis, are absolutely first-rate. The actors are also well-cast, including Pratt, who, if you can imagine such a thing, actually gets to play a kind of souped-up action hero version of his beloved character from his TV show Parks and Recreation: A charming doofus with a big heart and just enough skill to stay alive through countless scrapes.

Those hoping for a precipitous plunge from Marvel (we're looking over at you, Warner Bros.) will have to hope the next round of hero movies with lesser-known characters will somehow bottom out, because, against all odds, the studio has yet another elegant, extremely entertaining winner on its hands.