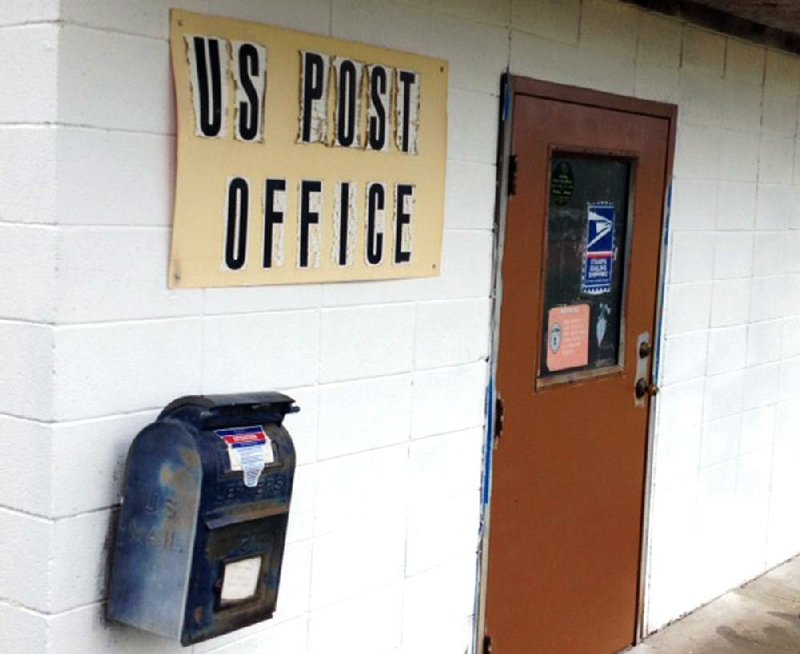 The post office at Lafe has been a gathering place in the sleepy town of 458 people, “the last main thing this city’s got,” convenience store worker Edith Davis said.

LAFE -- The rural Greene County town named twice by postmasters will lose its post office at the end of the month, when Elizabeth Mason stops selling stamps and sorting mail daily for the town's 16 box owners. 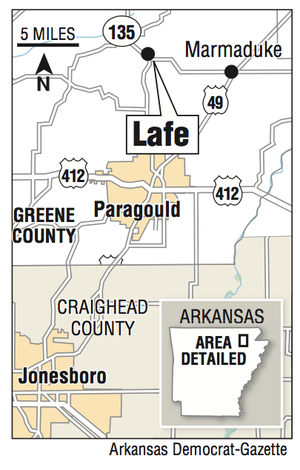 A map showing the location of Lafe, Arkansas.

Mason, 82, will retire on Aug. 30 after working two hours per day for 15 years in the post office across Arkansas 135 from St. John's Lutheran Church.

Mason learned of the post office opening in 1999, when a friend who helped put up a fence at her home told her about the job. She said that when she applied, her postal experience consisted only of walking down the driveway to get the mail from the box as a child.

She thinks she received the job offer for the contract position because she submitted the lowest bid to the U.S. Postal Service.

The service has no plans to hire a new postmaster, said U.S. Postal Service spokesman Robert Bowen of Dallas.

The closure is part of a larger plan by the Postal Service to save money. In 2011, the service proposed closing 4,800 post offices to save money after it reported losing $2.6 billion in that year's first quarter.

The service tempered its plan after residents in many of the communities targeted for closures protested. Bowen said the Postal Service is now shortening the hours of operations at scores of post offices to help save labor costs.

Post offices in Sedgwick in Lawrence County and Walcott in Greene County have recently announced they will cut service hours.

Residents who want to keep post office boxes will soon have to travel 8 miles to Marmaduke or 14 miles to Paragould. Others can put up mailboxes at their homes for rural delivery.

"It's been fun for me," said Mason, who was a nurse at a Jonesboro hospital before taking over the post office. "But it's been downhill for the post office. Technology has hurt us. People can buy stamps and send things on the Internet. We don't even have a way to accept credit cards here."

The cinder-block post office building doesn't have Internet access. Nor does it have a television, a landline telephone, a bathroom, heat or air conditioning.

Mason uses a cellphone to receive calls at the post office -- when the reception in the hills of northern Greene County allows it. She uses a box fan to cool off in the summers and an electric heater to warm the place during winters.

Last January, the building's landlord shut the power off for three weeks while he renovated another portion of the building. Mason wrapped herself in a coat and blankets, and worked her 10 a.m. to noon shifts in the cold.

If the temperature plummeted too far, she hung a note on the door and left early. "No heat," her sign read. "Outta here."

The sleepy town of 458 has had a connection with the Postal Service since the first post office opened there in 1899. Residents applied for a post office for "Newberry, Ark.," in honor of a sawmill operator of the same name who established the town.

The post office denied that name, so the postmaster at the time combined the names of his daughters and came up with "Loulyma." That name was accepted.

In 1901, a new postmaster named Lafayette Mueller took over, and the town voted to change the name to "Lafe" -- a shortened version of the postmaster's name.

The post office has been a fixture since. Before moving to the northern edge of town, the post office sat on Main Street near train tracks and, along with the town's school, was the gathering place for townsfolk.

But changes happened. The Lafe School consolidated with Marmaduke years ago, and it left a void in Lafe, said Edith Davis, an employee of the WW Quik Mart.

"This is the last main thing this city's got," Davis said of the post office. "A lot of people will be upset having to go to Marmaduke or Paragould now. A post office is a very, very nice addition to a community."

Down at the Lafe Volunteer Fire Department on Main Street, Assistant Chief Ben Cox painted plywood and worried about the post office's closure.

"It's a tragedy," he said. "The post office is the last cornerstone of the community, and the cornerstone has fallen."

For years, the Fire Department received its training certificates and yearly fees from its 900 members at P.O. Box 296.

"I guess we'll have to put up a mailbox now," Cox said.

Cherish Dixon frequently drops packages off at the post office because she sells things on eBay.

"Now, I'll have to go to Marmaduke," she said. "It's going to be difficult. I'll have to leave work longer to get these out."

A few minutes later, Tammy Christian, a secretary at St. John's Lutheran Church, stopped by the post office's open side door to pick up her father's mail.

"I hate to see it go," she said of the imminent closure. "But I could see it coming for a long time.

"I already put up my dad's box," she said. "We'll be putting one up at the church soon."

Mason has made scores of friends while tending the post office each morning.

"We are a fairly isolated area," she said. "We get to know everyone. I've met a lot of wonderful people. For 15 years, this gave me good reason to get up and get out each day."

She said she hopes residents acclimate to the changes brought on by the post office's closure. "People make trips to Paragould all the time anyway," she said. "They just need to adapt and include picking up their mail there on trips.

"Snail mail is going to stay," she said. "I may be old school in my attitude, but people still need snail mail. They still need to write letters and send things."

Print Headline: Post office retiring along with staff of 1