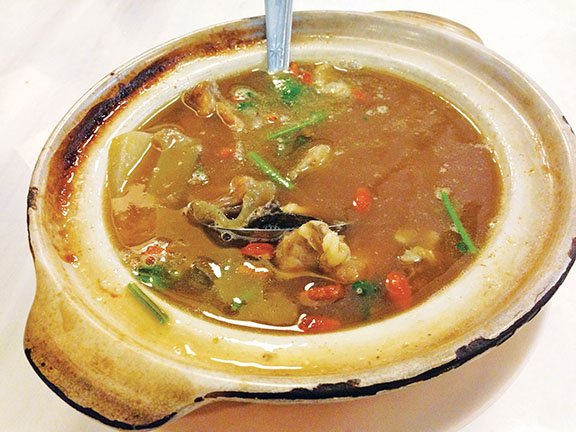 Snapping-turtle soup has been a Southern favorite for generations.

The sun was setting as I eased the johnboat into a cove for a final cast. As the popping bug dropped onto the mirrorlike surface of the pond, the mosquitoes had already begun their ceaseless buzzing, and a chuck-will’s-widow announced the evening’s start.

A scrappy bluegill nailed the lure, and I hoisted him into the boat. He would make a welcome addition to the stringer full of bream. My smile was replaced with a frown, however, as I pulled the stringer up to add my latest catch. Any dreams of a fish dinner were shattered as I lifted the chain and a 30-pound snapping turtle surfaced, his sharp, ugly beak clamped with bulldog fierceness to a hefty bluegill I had landed earlier. One dangling fish head offered testimony to the feast the huge turtle had enjoyed.

Well, if I couldn’t have fish for dinner, I’d have turtle. I heaved the thief over the stern and into the boat, smiling once again as I thought about the delicious meal the reptile would make.

The common snapping turtle is one of the largest reptiles found in Arkansas. Full-grown individuals average 8 to 12 inches long (the length of the shell) and weigh from 10 to 35 pounds. Exceedingly large snappers may measure up to 18 inches long, and if well-fed, may tip the scales up to 85 pounds. The common snapper’s relative, the alligator snapping turtle, grows much larger, but that species is protected in The Natural State and may not be possessed or killed.

Snappers are sometimes called “loggerheads” because the head is enlarged and equipped with a horny, hooked beak. When cornered, they show a vicious temper, hissing and striking with true reptilian speed. They often position themselves with their hind legs elevated and mouth wide open, then lunge forward in attack. If one’s traplike jaws latch onto a living target, it is said to hang on until it thunders. Although this is pure mythology, the human who has a finger or toe in its shearing beak might be inclined to believe it. Snappers are best handled by grasping the hind legs, holding the head down and well away from your legs.

The common snapping turtle is found in almost every freshwater habitat, including ponds, lakes, creeks and rivers. Water with a bottom of mud and aquatic vegetation is preferred. the snapping turtle’s food consists mostly of fish and water plants. Snappers play an important role in maintaining healthy fish populations by reducing numbers of sluggish or diseased individuals. Carrion may compromise as much as 20 percent of the diet. Also eaten are crayfish, clams, snails, worms, leeches, frogs, toads, salamanders, snakes, small turtles, birds and small mammals. Snappers are often disliked because in some areas they consume many ducklings.

The flesh of common snapping turtles is excellent and is eaten throughout their range. The meat is both light and dark in color. Southerners will tell you that it has the combined flavors of pork, beef, fish and chicken.

When you’ve caught a snapper, you are faced with the dilemma of dressing it. It’s not as hard as it might seem, but it takes some practice. Here’s how I do it.

First, shoot the turtle in the head. Then carefully

sever the head from the neck; some reflexes may still be present. Hang the neck down in an area protected from insects and allow it to bleed out completely. Next, cut through the junction between upper and lower shell. Crowding the overshell very closely, cut it free, detaching the ribs from the overshell with a heavy knife or hatchet. The legs are then skinned and the meat peeled out of the shell. The meat should be soaked in cold water with baking soda added to firm it and draw out the blood. The yellow fat should be removed, as it adds an undesirable flavor to the meat. Now the turtle is ready for the pot.

Many people prefer turtle merely rolled in flour and browned in hot grease. But since you’ve gone to all that trouble catching and dressing your turtle, why not try something a bit more extravagant and, in my opinion, a lot tastier? Here’s my grandma’s recipe:

Put one dressed turtle in a pot with selected herbs and seasonings and cover with water. Cover and simmer 1 1/2 hours or until the meat is tender. Debone.

5 to 6 quarts turtle broth from cooking

Combine all ingredients in a kettle and simmer 1 to 2 hours. This recipe will produce 8 to 12 quarts of the most delicious soup you’ve ever dipped your spoon in.

The snapper has both good and bad points. On the negative side, it destroys large numbers of ducklings in many areas. And many fishermen probably get high blood pressure, like I did, when the snapper robs them of their hard-won fish. On the positive side, snappers are important to the food chain as scavengers, and they probably aid in keeping fish populations at their best by feeding on many individuals that are sluggish or diseased. They’re also darn good eating for country boys like me.

Whether we view them as coldblooded thieves or a hot supper, these fascinating creatures have fulfilled an important role for millions of years, even before man’s earliest ancestors. With some respect and forethought on our part, those ol’ moss-backed loggerheads will be around for a million more.