In poll, state's uninsured cut nearly in half

Correction: The U.S. Census Bureau’s American Community Survey estimated that 434,160 Arkansas adults lacked insurance in 2012. An incorrect number for the census estimate was given in this article.

Arkansas had a bigger drop this year in the percentage of its adult residents who lack insurance than any other state, a survey released Tuesday found.

The survey by Gallup Inc. found that 12.4 percent of Arkansas adults lacked insurance as of midyear this year, a drop of 10.1 percentage points compared with 22.5 percent who lacked insurance last year.

As a result, the state went from having the second-highest rate of uninsured adults in the country, ahead of only Texas, to being tied with New Hampshire at No. 22 in the percentage of adults who reported having insurance.

The state with the second-highest drop was Kentucky, where the percentage of uninsured adults fell 8.5 percentage points, from 20.4 percent to 11.9 percent.

According to the Gallup website, the 2013 results had a margin of error of plus or minus 1 to 2 percentage points for most states, but as high as 3.5 points for small-population states such as Wyoming, North Dakota, South Dakota, Delaware and Hawaii.

The error range for those small states for the 2014 results was high as plus or minus 5 percentage points.

Of the 10 states with the biggest reductions, the survey report noted that all had chosen to expand their Medicaid programs as allowed under the 2010 Patient Protection and Affordable Care Act, and all had either set up their own health insurance exchanges or, like Arkansas, helped set up their exchanges under partnerships with the federal government.

A state board created by the Arkansas Legislature last year is exploring the establishment of a state-run exchange that would replace the federal partnership exchange as early as next year. 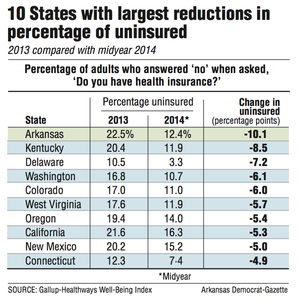 Graph showing the 10 states with the largest reductions in percentage of uninsured comparing 2013 with midyear 2014.

Arkansas officials credited the state's expansion of Medicaid under the so-called private option, in which the Medicaid program buys coverage for eligible recipients on the health insurance exchange, for leading to the drop in the state's uninsured rate.

In a statement, Gov. Mike Beebe noted that the Gallup survey indicates the number of uninsured adults in the state fell by 45 percent.

"When we worked with the Arkansas Legislature to pass the Private Option, we said it would make Arkansas a national leader for innovative health-care solutions, and this report proves that to be true," Beebe said. "Even though not everyone was happy with the circumstances surrounding the Affordable Care Act in our state, we showed that we could find a bipartisan path to make the best of the situation and help our people."

Amy Webb, an Arkansas Department of Human Services spokesman, said in an email, "The Private Option is the reason Arkansas is at the top of the list.

"We can't say exactly how many enrollees were uninsured before, but we know these people are the working poor, and it's likely many couldn't afford insurance or it wasn't offered to them."

She noted that Texas, which did not expand Medicaid, had the highest rate of adults who lacked insurance in the country last year and as of midyear this year, although the rate fell from 27 percent of adults last year to 24 percent this year.

Authorized by the Arkansas Legislature last year, the expansion of the state's Medicaid program extended eligibility to adults with incomes of up to 138 percent of the poverty level: $16,105 for an individual, for instance, or $32,913 for a family of four.

As of June 30, 184,244 newly eligible Arkansans had been approved for coverage under the program.

In addition, the Arkansas Insurance Department reported that 38,126 Arkansans had enrolled in non-Medicaid plans on the exchange as of July 6.

Most people enrolled in such plans qualified for federal tax credits to help pay their premiums. The tax credits are available to people with incomes of less than 400 percent of the poverty level: for example, $45,960 for an individual or $94,200 for a family of four.

According to the U.S. Census Bureau's American Community Survey, about 475,000 Arkansas adults lacked insurance in 2012, the most recent year for which census estimates are available.

Paul Cunningham, executive vice president of the Arkansas Hospital Association, said he wasn't surprised that the percentage of Arkansans without insurance dropped.

A survey by the association of 42 hospitals in the state found that the number of uninsured patients treated in the emergency room dropped by 24 percent and the number admitted to the hospital dropped by 30 percent in the first three months of this year compared with the first quarter of last year.

The association is preparing a survey on patients' insurance status through the first six months of this year, he said.

The increase in patients' insurance coverage has helped offset the effect of cuts in Medicare reimbursement rates mandated under the Affordable Care Act and through automatic federal budget cuts, Cunningham said.

"It gives many hospitals a fighting chance," he said.

Arkansas Surgeon General Joe Thompson said the survey was "the only health care report that I've ever seen Arkansas in a space that didn't have Mississippi and Louisiana really close to it."

Thompson also noted that, before expanding its program, Arkansas had one of the most restrictive Medicaid programs in the country, with eligibility mostly limited to low-income children, the elderly, the disabled and parents with incomes of up to 17 percent of the poverty level.

"I think there's huge need out there," Thompson said. "People know they have conditions that they've not taken care of, and this was a mechanism that they could remove the financial barrier to getting care that they needed."

Print Headline: In poll, state’s uninsured cut nearly in half