LRTDC scores big with who's who of speakers 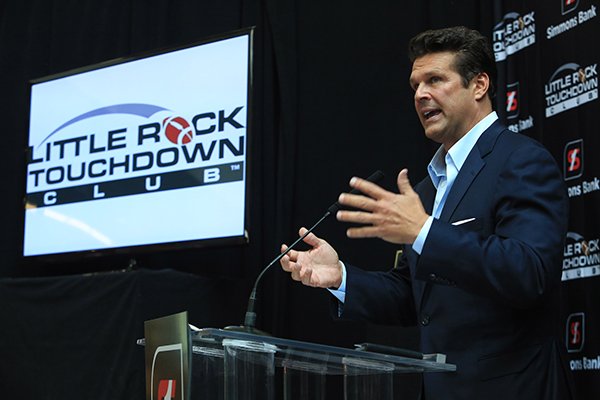 David Bazzel, president of the Little Rock Touchdown Club, announces the club's lineup of speakers Wednesday in the lobby of the Simmons Tower building in Little Rock.

It is never the same old thing with David Bazzel.

Wednesday, in front of a couple hundred football fans in the lobby of Simmons Bank , Baz announced this year's lineup of speakers for the Little Rock Touchdown Club. It is, by far, the most impressive group of speakers in the history of the club, which is in its 11th year.

Understand that it is called the Little Rock Touchdown Club, but people come from all over the state to hear the speakers. So it was a natural that Simmons stepped up to take over the presenting sponsorship role after it acquired former sponsor Metropolitan Bank.

George Makris, Simmons chief executive officer and chairman, opened the news conference by saying something that became the theme of the conference and this year's speakers: Help raise the bar.

Baz, who keeps the speakers a secret until the announcement, revealed a lineup that includes five former NFL players, two former NFL head coaches and the executive vice president of the Dallas Cowboys, Charlotte Jones Anderson, who will be the Touchdown Club's first female speaker.

Memberships start at $60, but there are also packages that include being a member of the National Football Foundation for $85, and you can add the Arkansas Sports Hall of Fame for a total of $135. Membership information is available at LRtouchdown.com.

Arkansas Razorback Coach Bret Bielema will kick off the season Tuesday, Aug. 19, at the Statehouse Convention Center and will be followed by former NFL coach Dave Wannstedt on Monday, Aug. 25.

The third speaker, Mark May of ESPN, will be Tuesday, Sept. 2, and NFL Hall of Famer and former coach Mike Singletary is set for Tuesday, Sept. 9. All the other speakers, except for the awards banquet in February, will appear on Mondays, primarily at Embassy Suites on Chenal Parkway.

Oct. 13, the week of the Razorbacks' game against Georgia, former Bulldogs coach Jim Donnan will speak. He will be followed by ESPN and SEC Network host Dari Nowkhah (a rising star in the profession) on Oct. 20, ASU Coach Blake Anderson on Oct. 27 and former NFL great Raghib "Rocket" Ismail on Nov. 3.

The Nov. 10 meeting moves back to the Statehouse Convention Center and will feature nine Arkansans who are being inducted in the Southwest Conference Hall of Fame.

Baz was not bashful about saying the lineup costs money and that Simmons has helped him raise the bar. Then he told the story about the day Simmons Bank opened its doors in 1904 when a little more than $3,200 was deposited on the first day.

Some of those speakers usually charge more than $20 per person for an event, and that's the price of lunch and the speaker for a member.

The founding members and board also were introduced. They are very involved in the operation -- although even they don't know the speaker lineup until the news conference -- but it is Baz's leadership that has made LRTDC a statewide success.

Wednesday's news conference raised the bar, and no doubt it will rise again in the future.

Print Headline: LRTDC scores big with who’s who of speakers