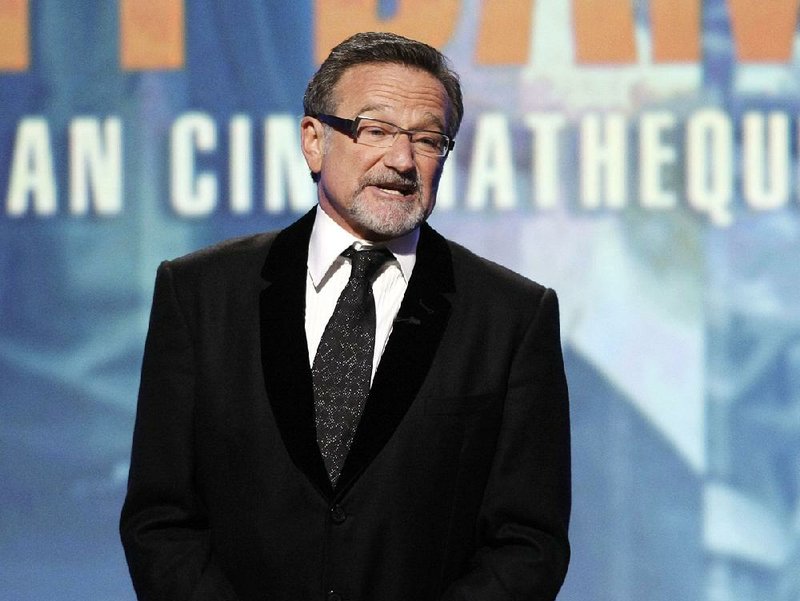 FILE - This March 27, 2010 file photo shows actor Robin Williams speaking at The 24th American Cinematheque Awards honoring Matt Damon in Beverly Hills, Calif. Williams, whose free-form comedy and adept impressions dazzled audiences for decades, has died in an apparent suicide. He was 63. The Marin County Sheriff’s Office said Williams was pronounced dead at his home in California on Monday, Aug. 11, 2014. The sheriff’s office said a preliminary investigation showed the cause of death to be a suicide due to asphyxia.(AP Photo/Dan Steinberg, File)

SAN FRANCISCO -- Robin Williams, the Academy Award winner and comic whose pop culture riffs and impressions dazzled audiences for decades, died Monday in an apparent suicide. He was 63.

Williams was pronounced dead at his home in California, according to the Marin County sheriff's office, north of San Francisco. The sheriff's office said a preliminary investigation shows the cause of death to be a suicide from asphyxia.

"This morning, I lost my husband and my best friend, while the world lost one of its most beloved artists and beautiful human beings. I am utterly heartbroken," said Williams' wife, Susan Schneider. "On behalf of Robin's family, we are asking for privacy during our time of profound grief. As he is remembered, it is our hope the focus will not be on Robin's death, but on the countless moments of joy and laughter he gave to millions."

From his breakthrough in the late 1970s as the alien in the hit TV show Mork and Mindy through his stand-up act and such films as Good Morning, Vietnam, the short, barrel-chested Williams ranted and shouted as if just sprung from solitary confinement. Loud, fast, manic, he parodied everyone from John Wayne to Keith Richards, impersonating a Russian immigrant as easily as a pack of Nazi attack dogs.

He was the leading man in drag in Mrs. Doubtfire and the cartoon genie in Aladdin. He won his Academy Award in a rare, but equally intense dramatic role, as a teacher in the 1997 film Good Will Hunting.

He was no less on fire in interviews. During a 1989 chat with The Associated Press, he could barely stay seated in his hotel room, or even mention the film he was supposed to promote, as he free-associated about comedy and the cosmos.

"There's an Ice Age coming," he said. "But the good news is there'll be daiquiris for everyone and the Ice Capades will be everywhere. The lobster will keep for at least 100 years, that's the good news. The Swanson dinners will last a whole millennium. The bad news is the house will basically be in Arkansas."

Like so many funnymen, Williams had serious ambitions, winning his Oscar for his portrayal of an empathetic therapist in Good Will Hunting. He also played for tears in Awakenings, Dead Poets Society and What Dreams May Come.

"I dread the word 'art,'" Williams said in 1989. "That's what we used to do every night before we'd go on with Waiting for Godot. We'd go, 'No art. Art dies tonight.' We'd try to give it a life, instead of making Godot so serious. It's cosmic vaudeville staged by the Marquis de Sade."

His personal life was often short on laughter. He had acknowledged drug and alcohol problems in the 1970s and '80s and was among the last to see John Belushi before the Saturday Night Live star died of a drug overdose in 1982.

Williams announced in recent years that he was again drinking but rebounded well enough to joke about it during his recent tour.

"I went to rehab in wine country," he said, "to keep my options open."

Born in Chicago in 1951, Williams would remember himself as a shy kid who got some early laughs from his mother -- by mimicking his grandmother. He opened up more in high school when he joined the drama club and he was accepted into the Juilliard Academy, where he had several classes in which he and Christopher Reeve were the only students and John Houseman was the teacher.

Encouraged by Houseman to pursue comedy, Williams identified with the wildest and angriest of performers: Jonathan Winters, Lenny Bruce, Richard Pryor, George Carlin. Their acts were not warm and lovable. They were just being themselves.

He unveiled Mork, the alien from the planet Ork, in an appearance on Happy Days and was granted his own series, which ran from 1978-82.

Winner of a Grammy in 2003 for best spoken comedy album, Robin Williams -- Live 2002, he once likened his act to the daily jogs he took across the Golden Gate Bridge. There were times he would look over the edge, one side of him pulling back in fear, the other insisting he could fly. 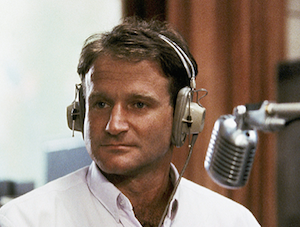