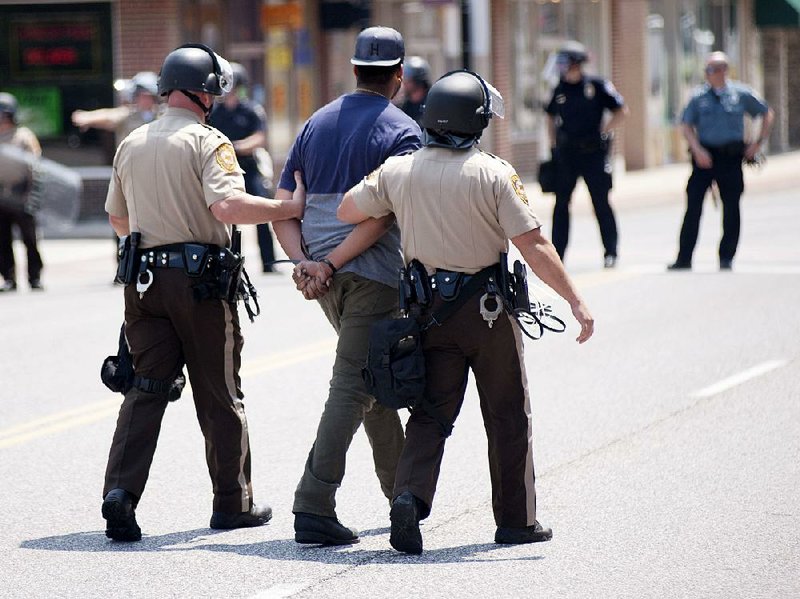 Police detain a protester following a march along Florissant Road in downtown Ferguson, Mo. Monday, Aug. 11, 2014. The group marched along the closed street, rallying in front of the town's police headquarters to protest the shooting of 18-year-old Michael Brown by Ferguson police officers. Brown, who was killed in a confrontation with police in the St. Louis suburb, was shot Saturday, Aug. 9, 2014, and died following the confrontation with police. (AP Photo/Sid Hastings)

The FBI said Monday that it had opened an inquiry into the Saturday shooting death of an unarmed black man by a police officer that sparked a night of looting and vandalism in Ferguson, Mo., a suburb of St. Louis.

Special Agent Cheryl Mimura of the FBI's office in St. Louis said the agency had begun an investigation into possible civil-rights violations connected to the death of Michael Brown, 18, who had been planning to begin college classes Monday.

The circumstances of Brown's death remained in sharp dispute two days after he was killed by a police officer in Ferguson, a city of about 21,000 northwest of St. Louis. Police have said an officer was "physically assaulted" before opening fire early Saturday afternoon. Authorities also said there had been a struggle "over the officer's weapon." It was unclear whether Brown or a man he was with was involved in the altercation.

Investigators have refused to publicly disclose the race of the officer, who is now on administrative leave.

But Phillip Walker said he was on the porch of an apartment complex overlooking the scene when he heard a shot and saw a white officer with Brown on the street.

Brown "was giving up in the sense of raising his arms and being subdued," Walker said. The officer "had his gun raised and started shooting the individual in the chest multiple times." The officer then "stood over him and shot him" after the victim fell wounded.

Walker acknowledged that he did not see a scuffle or the circumstances surrounding the first gunshot.

Dorian Johnson offered a similar account when he told WALB-TV, Channel 10 that he and Brown were walking home from a convenience store when a police officer told them to get out of the street and onto the sidewalk. Johnson said they kept walking, which caused the officer to confront them from his car and again after getting out of the vehicle.

Johnson said that the first time the officer fired, he and Brown got scared and ran away.

"He shot again, and once my friend felt that shot, he turned around and put his hands in the air, and he started to get down," Johnson said. "But the officer still approached with his weapon drawn and fired several more shots.

"We wasn't causing harm to nobody. We had no weapons on us at all."

Department Police Chief Jon Belmar said an autopsy had shown that Brown had been "struck several times by gunfire." His department has been leading the investigation, and Mimura said the county police would continue their work as the FBI conducted its review.

Ferguson Police Chief Tom Jackson said there's no video footage of the shooting from the apartment complex, police cruiser dashboard cameras, or body-worn cameras that the department recently bought but has not yet put to use. Brown's parents and their attorneys asked the public to share any information and video recordings related to the shooting.

At a news conference Monday, Belmar pleaded for the public's patience.

"I understand that the public has a right to be skeptical, and I appreciate that, and I would expect that the public be skeptical oftentimes of government or some forms of it," he said. "But I would also ask the public to be reasonable because it takes a long time to make sure we do this investigation the right way."

In Washington, a Justice Department spokesman, Dena Iverson, said Monday that Attorney General Eric Holder had instructed lawyers in the Civil Rights Division to monitor developments in the shooting.

Officials on Monday were also absorbing the consequences of what they said was an unprecedented night of chaos for Ferguson.

"I've been doing this 28 years," Belmar said. "Not only have I never seen anything like this, I've never even heard about it in the history of St. Louis."

A vigil Sunday for Brown was followed by angry demonstrations overnight after protesters took to the streets, looting stores, vandalizing cars and confronting police. Crowds of protesters flooded the streets near the scene of the shooting, some of them chanting "No justice, no peace."

Several businesses were looted, including a check-cashing store, a boutique and a small grocery store. People also took items from a sporting goods store and a cellphone retailer and carted rims away from a tire store.

Some climbed atop police cars as the officers with riot shields and batons stood stoically nearby, trying to restrict access to the most endangered areas. In one television report, people could be seen running away from a store with their arms full of shoes.

The protesters were met by hundreds of police officers in riot gear carrying rifles and shields, as well as by K-9 units. Belmar said at the news conference that police stepped in after the looting and vandalism began. A small group, he said, broke off from the protest and began the violence.

Deanel Trout, a 14-year resident of Ferguson, was convinced the troublemakers were largely from outside Ferguson and that they used Brown's death and the vigil as an opportunity to steal.

St. Louis County police spokesman Brian Schellman said 32 people were arrested for various offenses, including assault, burglary and theft. He also said two police officers were injured, including one who was struck by a brick, but there were no reports of civilians hurt.

In a series of posts on Twitter, Chief Samuel Dotson III of the Metropolitan Police Department in St. Louis said the city's officers were among the law enforcement officials working overnight "to calm the situation in Ferguson."

St. Louis, Dotson said, sent its tactical team to Ferguson and was also providing officers for southern St. Louis County, which was understaffed as officials worked to manage the violence elsewhere.

Law enforcement officials said they were mapping out plans Monday to prepare for the threat of renewed trouble, even as Ferguson Mayor James Knowles III warned that reconciliation would be difficult if violence continued in his city.

"We have an issue here, we have a young man who is dead, and we need to get to the bottom of it, and we need to heal as a community," Knowles told CNN. "We're not going to do that if people are rioting."

Belmar said posts on social media may have fueled Sunday's outbreak of violence.

"Fifteen years ago, 10 years ago, maybe even five years ago, we wouldn't have had the issue with social media's impact on this crime spree," he said.

On Monday, the scene of the shooting was marked with a makeshift memorial of candles and signs in the middle of the narrow street where Brown fell dead.

Brown's father, also named Michael Brown, visited the memorial Monday, at one point straightening a wooden cross. He abruptly left after gunshots rang out a block away. There were no reports of injuries from that gunfire.

Brown's family had planned to drop him off at a technical college Monday to begin his studies.

"Instead of celebrating his future, they are having to plan his funeral" and consulting with attorneys about arranging a second autopsy, said Benjamin Crump, an attorney for the family who also represented Trayvon Martin's relatives in the racially charged 2012 slaying in Florida.

"I don't want to sugarcoat it," Crump added. Brown "was executed in broad daylight."

Meanwhile, a criminal justice professor said the fact Michael Brown was unarmed does not necessarily mean the use of force was unjustified in the eyes of the law.

The key question will be whether the officer had reason to believe Brown posed a threat -- gun or no gun.

"The federal courts are very clear that there are times and places where officers are allowed to shoot people in the back when they are running away, even if they are unarmed," said David Klinger, a professor at the University of Missouri-St. Louis and expert on police shootings.

In that case, two police officers responding to a burglary encountered a fleeing suspect and shot him dead as he tried to climb over a fence. The officer who fired had no reason to believe the suspect was armed.

In a 6-3 opinion, the court held that "deadly force may not be used unless it is necessary to prevent the escape and the officer had probable cause to believe that the suspect posed a significant threat of death or serious physical injury to the officer or others."

Language from that case, in some variation, now appears in police manuals across the country.

Klinger said that if an investigation shows the earlier struggle did occur as described, even if Brown was fleeing, it could be grounds for justifying the shooting.

Information for this article was contributed by Alan Blinder, Ashley Southall, Julie Bosman and Emma G. Fitzsimmons of The New York Times; by Jim Suhr, David A. Lieb, Alan Scher Zagier, Eric Tucker and Rhonda Shafner of The Associated Press; and by Jennifer S. Mann of the St. Louis Post-Dispatch.