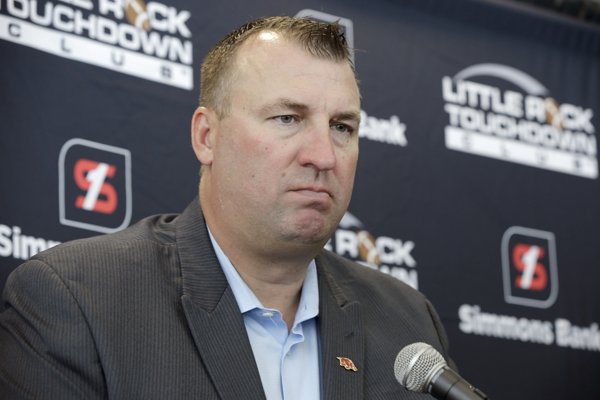 LITTLE ROCK (AP) — Arkansas football coach Bret Bielema said Tuesday that while his Razorbacks aren't ranked at the top of the polls, they are still rated better than his initial Wisconsin team was when he started coaching in 2006.

"I think we were ranked 76th in the country. We finished 12-1 and No. 5. I know that rankings do truly not matter," Bielema told reporters before an appearance at the Little Rock Touchdown Club. "As a player, as a fan, you don't necessarily see things through the eyes of a head coach. I know where we are at."

Arkansas opens its season Aug. 30 at Auburn, which defeated the Razorbacks 35-17 at Fayetteville. Bielema said he has seen progress among his players and would expect it to continue — likening his program to a house.

"The thing that we're building is something that will last," Bielema said. " If you build it the right way the first time, you're never going to have to go back and do it again. It should last a long long time. That's true if you're building a fence, building a house or building a program.

"It may not be a mansion ... but it's definitely going to be a functional living space," he said.