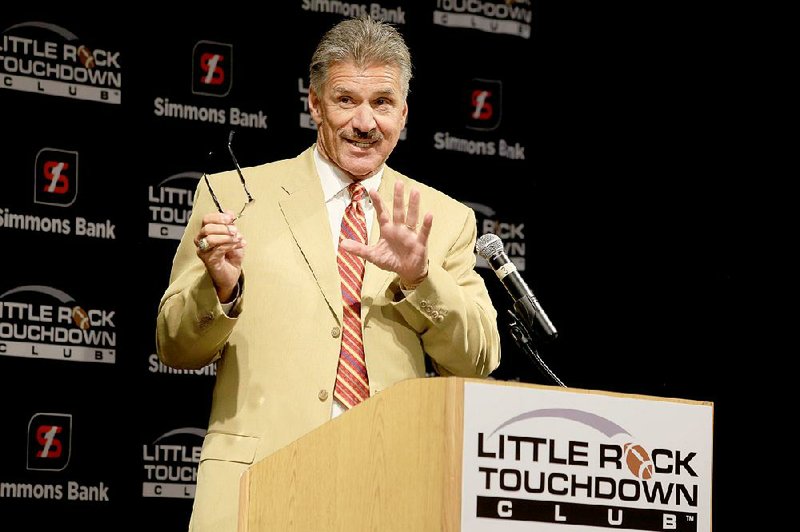 Dave Wannstedt preached patience to Arkansas fans during his visit to the Little Rock Touchdown Club Monday at the Embassy Suites Hotel in Little Rock.

Wannstedt, a former head coach for the Chicago Bears and Miami Dolphins in the NFL and at Pittsburgh in college, got a good look at the Razorbacks this past spring when Arkansas Coach Bret Bielema asked him to watch practice and evaluate film.

"The one thing that impressed me was that these players are tough," said Wannstedt, 62, now a college football analyst for Fox Sports. "These players have been through a couple of tough seasons and they were excited about coming out to practice."

The Razorbacks, coming off seasons of 3-9 under Bielema and 4-8 under John L. Smith, open the season Saturday against an Auburn team that lost to Florida State in the BCS Championships game.

Wannstedt said he can understand how Arkansas fans, who were treated to four seasons of high-flying offense under Bobby Petrino, might not find Bielema's power game as fun to watch.

But Wannstedt pointed to teams like Alabama, which won three BCS championships in four years; Michigan State, which is the defending Big Ten and Rose Bowl champion; and Stanford, which has played in four consecutive BCS games, as teams who prove you don't have to run Spread offenses to win games.

"The point is, you have to be patient with the system," Wannstedt said.

Wannstedt related a story from his days as the Dallas Cowboys defensive coordinator under Jimmy Johnson as an example of how patience can pay off in the long run.

Wannstedt said he told Johnson during Dallas' 1-15 season in 1989 that he wanted to change the defensive scheme from the 4-3 to the 3-4, but Johnson told him to stick with the 4-3 as the foundation and the Cowboys would get better players and the scheme would work.

"The thing that Jimmy taught me was in football, or anything you do in life, you have to have a good foundation. You might lose some games, but if your foundation is solid, you'll get through the rough spots," Wannstedt said.

Wannstedt, who worked for current Arkansas Athletic Director Jeff Long when he was the head coach at Pittsburgh from 2005-2010, said he thinks Long and Bielema will get things turned around.

"When Jeff Long first contacted me, I had resigned from the Dolphins and I still wanted to stay in the NFL, but he told me about his plan and I liked what he had to offer."

Wannstedt went 42-31 in six seasons at Pittsburgh -- 16-19 his first three seasons and 26-12 over the final three seasons -- before resigning under pressure from Athletic Director Steve Pederson, who took over for Long in 2007.

Wannstedt said he can see, even from a distance, that things haven't been easy for Long at Arkansas, with the departure of Houston Nutt, the hiring and firing of Petrino before the interim use of Smith in 2012.

"He had no control over the off-the-field issues with Petrino and he was trying to bridge the gap with John L. Smith for a year, but I like Bret Bielema. I believe he has a good philosophy and a good staff," Wannstedt said.

Wannstedt said he hopes Nutt, who he coached at Oklahoma State from 1979-1980, can get back into coaching. Nutt has beeen out since the 2011 season when he was fired at Ole Miss after 2-10 season. "I've tried to get him a job in the NFL," Wannstedt said. "He's too good a coach to be out of the game."