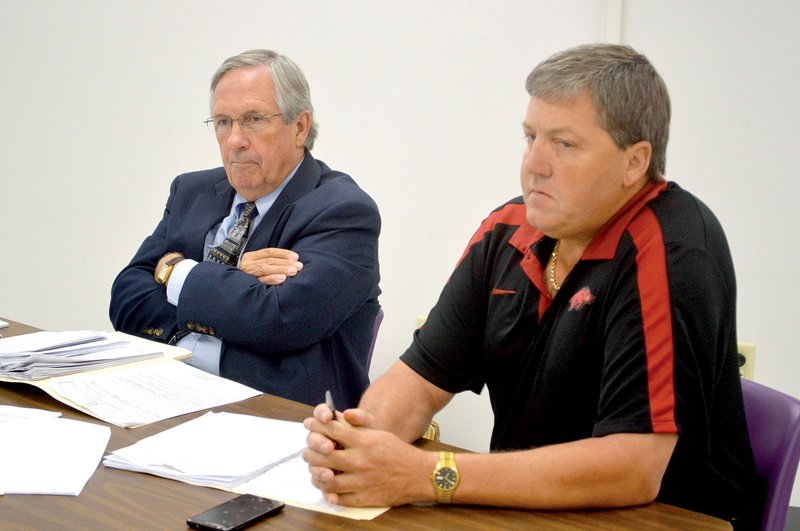 Former Mayflower High School Principal Jeff Cagle, right, is shown with his attorney, Randy Coleman of Little Rock, in September 2013 during Cagle’s termination hearing before the Mayflower School Board. The board unanimously upheld Superintendent John Gray’s recommendation to fire Cagle. Cagle filed a lawsuit against the district in November 2013 and was hired this summer by the Hazen School District as a math teacher. Gray said that through correspondence, Cagle asked for $40,000 and $5,000 in attorney’s fees.

MAYFLOWER — Settlement negotiations are underway between the Mayflower School District and a former Mayflower High School principal who filed a lawsuit against the district after he was fired in 2013.

Cagle has since been hired as a math teacher at Hazen High School for the 2014-15 school year. David Strohl, Hazen School Board president, said board members were not aware of Cagle’s firing or the lawsuit when he was hired in June.

However, Strohl said he and another board member received telephone calls after Cagle’s hiring, informing them that Cagle had been accused of improper behavior but that there was no finding of wrongdoing.

“After the hiring is when it came to my attention,” Strohl said.

Strohl said his understanding is that Hazen Superintendent Nanette Belford “did some research when we started receiving phone calls and concerns from parents” and did not find any reason to take action.

Belford, a former Hazen Elementary School principal, is in her first year as Hazen superintendent.

Belford said she did not know until after Cagle was hired that he had been fired from the Mayflower School District or that he had filed a lawsuit against that district.

“We checked him out with the [state] Department of Education, and there’s nothing there. He’s in good standing with the Department of Ed. There are not ethics violations that have been filed against him or anything.

“He is a math teacher. He is not employed in an administrative position at all, and he’s certified to teach math,” Belford said.

Gray said Monday that he was not aware that Cagle had been hired by another school district.

“All I know is the attorneys are just going to and fro,” he said. “All I’ve heard is his side was anxious to get [the lawsuit] settled.”

“Our board has agreed we would settle through the insurance company,” Gray said.

“If he’s earning, it makes a difference in the case,” Gray said.

Cagle was employed for the 2012-2013 school year, and his contract had been renewed for another year. Gray gave Cagle a good evaluation in February 2013, marking almost every category with “meets expectations.”

However, he said concerns came to light that caused him to suspend Cagle.

A counselor at the high school told Gray that he and Cagle were having a conversation in the hall when two “pretty girls” walked by and that Cagle turned his head and watched them walk by, losing his train of thought.

The counselor told Gray he was “unnerved” by the way Cagle looked at the students, telling Gray it was in a “perverted and highly improper manner,” Gray said at Cagle’s hearing before the board.

Gray created a survey for high school employees that stated it was “on the competence and effectiveness of your high school principal, Mr. Jeff Cagle.”

The responses were anonymous, but staff members were asked to sign a sheet if they responded.

The superintendent said that of 31 responses, 26 “show lack of ability to lead staff and students.” He said 10 responses mentioned that Cagle made inappropriate comments regarding females.

Gray suspended Cagle in May 2013 and recommended that his contract be terminated. The Mayflower School Board upheld the superintendent’s recommendation to fire Cagle.

Cagle’s lawsuit, filed Nov. 4, 2013, in Faulkner County Circuit Court, contends that his firing was illegal because, as a principal, the Teacher Fair Dismissal Act protected him.

He requested a jury trial and asked to be paid for the remainder of his contract and benefits due him.

A native of Palestine, Cagle was fired in 2002 by the Palestine-Wheatley School District after allegedly conducting a strip search on six students to find missing money, according to an Associated Press story.

He was principal of the district’s high school in Palestine but was filling in for the principal in Wheatley,

according to the article. Cagle filed a lawsuit in St. Francis County Circuit Court against the school district for breach of contract. The lawsuit was dismissed in 2005, according to a spokesman for the circuit clerk’s office in Forrest City.

Cagle’s last administrative position before being hired in Mayflower was as Carlisle High School principal.