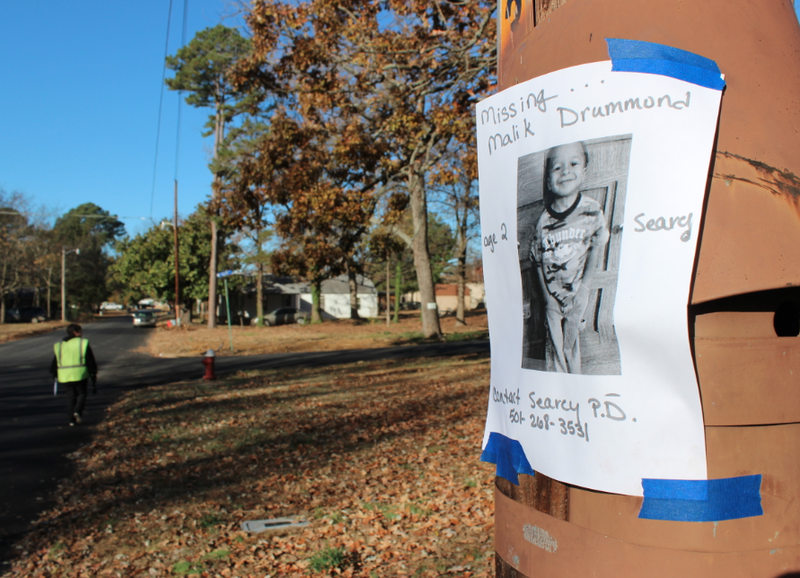 Authorities in Searcy say they have suspended a volunteer-driven search surrounding the home where a toddler vanished earlier this month.

The Searcy Police Department said in a statement early Monday afternoon that it was closing a command center that had been set up to manage the search effort for missing 2-year-old Malik Drummond, noting that investigators "cannot reasonably believe this child is lost, or hiding waiting to be discovered anywhere near the area he could’ve traveled on his own. "

"While we are just as committed to finding Malik and the truth behind his disappearance, we’ve depleted the usefulness of volunteers to re-search areas that now must be cleared by trained personnel and experts who are focused on the only possible remaining scenarios," Searcy Police Chief Jeremy Clark said in a statement.

Malik was reported to have wandered off from his home in the 700 block of West Park Avenue the night of Nov. 23. Hundreds of volunteers, along with law enforcement and search specialists with K9s, combed the area in the days after, but found no sign of the missing boy.

Clark thanked volunteers in the statement, noting it's possible that volunteers will be asked to help again but for now "the need no longer exists."

Clark noted that while that search was progressing, city police, Arkansas State Police and the FBI "conducted a very active investigation under a much larger range of possibilities."

"Our investigation is ongoing as is the search for Malik," Clark said. "This agency will not stop until he is found and the truth is discovered. We’re asking for all citizens to ... report any information learned to us immediately. As with any active criminal investigation, the details of such cannot be discussed and we’re asking for patience and understanding from all people not to cloud our efforts with false leads, rumors and innuendo. To be candid, this is a very serious matter and we’re appealing to everyone’s best nature and sense of responsibility. "

Malik was wearing brown pants and a blue shirt, police said, adding that he is black, stands about 3 feet tall, weighs 40 pounds and has brown hair and brown eyes. He is also autistic, authorities said.