A 21-year-old Ozark, Mo., man was in good condition Monday after an 11-hour effort to rescue him from a ledge where he had fallen Sunday while rock climbing in the Buffalo National River area. 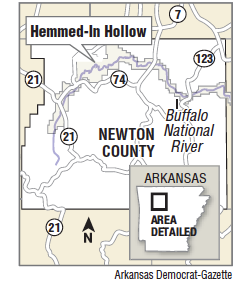 Camron Mclaughlin fell about 25 feet from a bluff onto a ledge at 2:45 p.m., according to a news release from Caven Clark, a spokesman for the Buffalo National River.

Newton County Sheriff Keith Slape said the ledge probably saved Mclaughlin's life because it kept him from falling another 120 feet to the ground below.

"I'm smiling because I was afraid this was going to result in a recovery instead of a rescue," Slape said Monday. "I'm grateful. All things considered, he's pretty lucky."

The sheriff said Mclaughlin appeared to suffer leg and back injuries from the fall. Mclaughlin was taken by ambulance to North Arkansas Regional Medical Center in Harrison for initial treatment. He was later transferred by ambulance to Mercy Hospital in Springfield, Mo., where he was in good condition Monday afternoon.

The accident occurred near Hemmed-in Hollow falls, a 210-foot waterfall popular with hikers in the Ponca Wilderness area.

Slape said 51 people from several agencies assisted in the rescue.

Zach Collette of Springfield, Mo., who was rock climbing with Mclaughlin, ran up to the trail head where he could get cellphone coverage and called for help, according to the news release. He reached a 911 operator about 3:45 p.m. The Buffalo National River Search and Rescue team was activated shortly afterward, according to the release.

Searchers gathered at the Compton trail head and departed in groups down the trail to first locate Mclaughlin and then decide the safest and most efficient means of transporting him, according to the release.

Slape said the staging location was about 3.5 miles from Mclaughlin.

"It's extremely steep and treacherous in that area," Slape said. "The sign where they had parked at said that."

The high temperature Sunday was about 70 degrees, but during the night, a front came through and the temperature plummeted about 30 degrees. Slape said a rescuer was lowered from the top of the bluff to provide first aid and cover Mclaughlin with blankets and heat pads. The ledge was just wide enough for Mclaughlin and one other person, he said.

"It got cold and pretty miserable," said Slape. "We got some freezing rain there at the end. It was quite the ordeal."

Rescuers used a stretcher to lower Mclaughlin from the ledge to a team waiting below.

A single wheel was attached to the stretcher to facilitate transport back up the trail to the waiting ambulance, according to the news release.

In some areas, the stretcher was lifted by ropes because rescuers couldn't hike the steep terrain while carrying him, Slape said. Mclaughlin reached the ambulance about 3 a.m., according to the release.