Hutchinson pops in at kids lockup 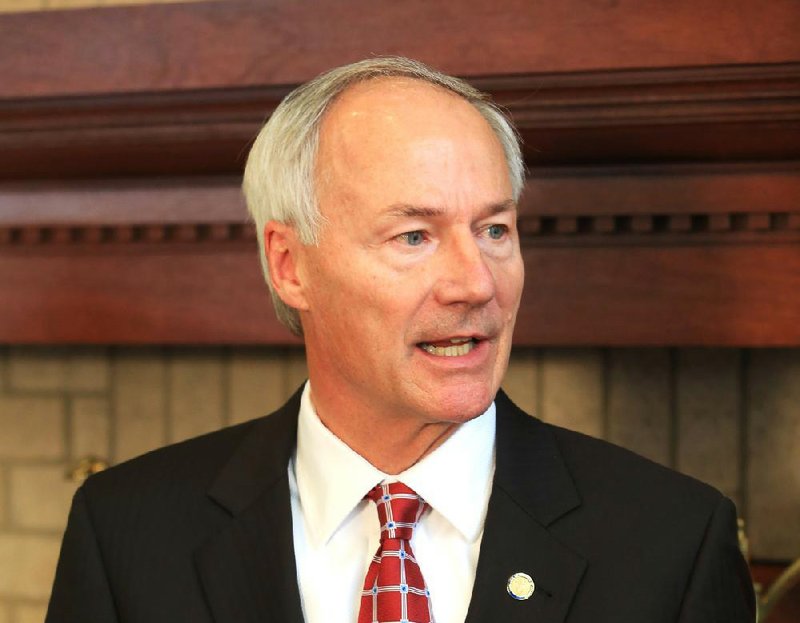 Gov.-elect Asa Hutchinson made a surprise visit to the Arkansas Juvenile Assessment and Treatment Center near Alexander.

Gov.-elect Asa Hutchinson made a surprise visit Tuesday to the state's largest youth lockup, where he met with boys and girls housed there as well as new leadership put in place after allegations of physical abuse at the facility surfaced last summer.

Hutchinson, a Republican who takes office in January, said he went to the Arkansas Juvenile Assessment and Treatment Center near Alexander to send a message that the fair treatment of youths in state custody will be a priority of his administration.

"The purpose was to make sure everyone knew the importance of this state mission to the governor. I think that will increase the seriousness of the work, the level of monitoring as well as performance by the contractor," he said. "Whenever folks know that the governor can show up unexpectedly, that's a good thing."

Hutchinson's visit comes as the federally funded Disability Rights Arkansas continues its investigation of the Alexander lockup. It houses about 100 of the state's most violent and behaviorally troubled juvenile delinquents and is operated under contract by a Florida-based company.

In an interview after his visit to the Alexander campus, Hutchinson said that talking with youths housed there reminded him that many of them will be returning home to their communities when they turn 18, and that the state needs to do more to help them re-enter society.

He also said the recent problems at both the Alexander campus and the Yell County lockup highlighted the need for better state oversight of how the state's juvenile delinquents are being treated.

The governor-elect said that he was still formulating his proposals for any changes he wants to make to the state's juvenile and adult criminal justice systems.

"Juvenile justice will be an important part of our overall criminal justice reform, but it's too early at this stage for me to give any predictions as to what specific changes will be made," Hutchinson said.

"I think the first responsibility is to stabilize our monitoring program to make sure it's sufficiently staffed and our juveniles are properly cared for, and then let's see how we can improve it and make it more successful."

Hutchinson said he chose to visit the Alexander campus because of its "history of challenges" -- including the recent allegations of misconduct by staff members -- and efforts by the Youth Services Division to root out that conduct through increased monitoring of how youths are treated.

Hutchinson visited with a class of boys and a class of girls. He also talked with Youth Services Division staff members and administrators from G4S Youth Services, the contractor that has been paid about $10 million per year to operate the facility.

Hutchinson said he was pleased with the educational programs he toured during his 45-minute visit as well as the new leadership put in place by G4S this fall.

Tom Masseau, the director of Disability Rights Arkansas, said that he was encouraged by Hutchinson's visit to the Alexander lockup, where his staff will be visiting today as part of its ongoing investigation.

"One of the things that we're obviously concerned about is making sure the state is fully aware of the problems that are arising in the juvenile justice system. When he comes and makes an unannounced visit, that just raises the level of importance as to what the state is going to do," Masseau said. "This is good news."

Masseau said that he had reached out to Hutchinson's staff and hoped to meet with them soon about "addressing some of the concerns that we've seen across the state at these facilities."

"Monitoring these facilities is like peeling an onion: Just when you think you have it figured out, another issue arises," he said, noting that conditions at the Alexander lockup have improved since the group began visiting it last summer.

Masseau's group is a nonprofit that has authority under federal law to investigate facilities that house people with disabilities. It began investigating the Alexander lockup after the Arkansas Democrat-Gazette reported in June that assault reports had nearly doubled at the facility, increasing from 165 in 2012 to 327 in 2013.

In August, the group released an interim report of its findings, including that multiple youths had reported that staff members at the lockup rewarded youths with candy bars for assaulting other children. The report also questioned whether some youths were staying too long at the facility.

In response to the report, the Youth Services Division has augmented its monitoring staff and has directed G4S to make several changes to its policies and procedures.

Over the past few months, G4S has replaced administrators at the facility, including the director. It also retrained its employees and sent in an outside consultant to interview youths and employees and compile a report on changes that needed to be made.

In an email Tuesday, G4S spokesman Monica Lewman-Garcia said that the governor-elect met with the facility's new director and assistant director and "seemed pleased with the vision and responses."

Their discussion was "broad, ranging from what types of crimes youth commit to be placed in [state] custody to services offered as youth transition out of the facility and what factors played into a youth successfully completing his or her treatment plan," Webb said.

In addition to changes at the Alexander campus, the Youth Services Division is also working to hire three additional monitors who will be responsible for overseeing conditions at the state's residential treatment centers as well as the five county-operated juvenile detention centers that house youths in state custody.

One of those juvenile detention centers, the Yell County lockup, is currently the subject of an internal investigation by the Youth Services Division regarding the improper use of a restraint device known as The Wrap.

Youths were forced into the device with their hands cuffed behind their backs, legs strapped together and chest immobilized by a harness and a strap connected to their feet. In some cases, guards placed a motorcycle helmet wrapped in duct tape over the youths' heads, putting them in near total darkness.

The practice was discovered in early September by Scott Tanner, the juvenile ombudsman at the Arkansas Public Defender Commission, who then alerted the Youth Services Division. The agency demanded that the practice stop, prompting Yell County Sheriff Bill Gilkey to have the device removed from the facility.

By then, the practice had gone on for at least two years during which time the state paid the center thousands of dollars each month to house youths in the Youth Services Division's custody.

During that time, staff members used the device to punish such behavior as throwing wet socks, insults, vulgar gestures, name-calling, yelling, screaming, and banging on windows and doors, according to records obtained by the newspaper under the Arkansas Freedom of Information Act.

Hutchinson said that the situation at the Yell County lockup illuminated the need for better coordination between the Youth Services Division, which has responsibility for the youths in its custody, and the Criminal Detention Facilities Review committees, which have responsibility for county jails and juvenile detention centers.

"Our monitors need to make sure that their reviews are sufficiently in-depth and that they have the authority to not just monitor the policies and that they have authority over any facility that holds state juvenile offenders, and that needs to be part of the relationship with the county facility," Hutchinson said, noting that "there's been a question as to responsibility and authority over these facilities and that needs to be clarified for sure."

When asked whether the clarification should come from his administration or the Legislature, Hutchinson said, "I would like think that can be handled administratively, but we'll see."

Hutchinson said he didn't think that an agency outside of the Youth Services Division needed to do an independent investigation of the Yell County facility.

"I think [the division] was understaffed in terms of their monitors. ... I wouldn't go beyond that at this point," he said.