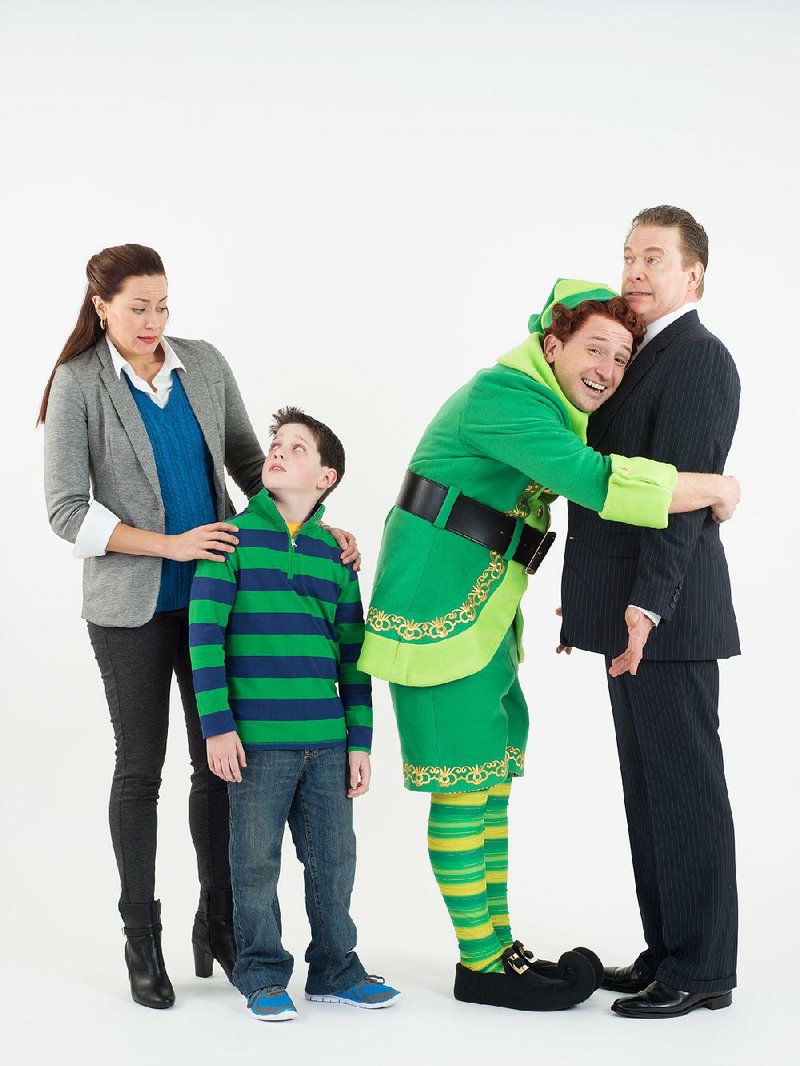 Just as the hugely popular movie A Christmas Story was turned into a play and musical in recent years, another holiday hit movie, Elf, has been turned into a musical, which opens this weekend at the Arkansas Repertory Theatre.

Elf tells the tale of Buddy, a young orphan who, after mistakenly crawling into Santa's gift bag, is raised at the North Pole. When he grows older, as he puzzles over his large size and poor toy-making abilities, he learns that he is actually a human, which sends him off to New York to find his father -- who turns out to be on Santa's "naughty list." He soon finds himself trying to win over his new family as he reminds the city of the true meaning of Christmas.

7 p.m. today-Saturday, and 2 p.m. Saturday-Sunday, with performances at 7 p.m. Wednesday-Sunday, and 2 p.m. Sunday (plus additional Saturday matinees only on Dec. 27 and Jan. 3), through Jan. 4, Arkansas Repertory Theatre, Sixth and Main streets, Little Rock (preview performance at 7 p.m. today with pre-show director’s talk from 6:15 to 6:45 p.m.)

The 2003 movie (which starred Will Ferrell) was adapted by Thomas Meehan (The Producers) and Bob Martin (The Drowsy Chaperone), with a score by the Tony Award-nominated songwriting team of Matthew Sklar and Chad Beguelin (The Wedding Singer).

Nicole Capri, the Rep's resident director and director of education, is directing Elf.

"The movie has such a cultlike following, just like A Christmas Story, with TV stations that play them 24 hours a day in December," Capri says.

She says the musical -- with a cast of 33, 13 of whom are children -- differs from the movie in some respects.

"In the play, Santa is the narrator, not Papa Elf, as in the movie," Capri says. "And in the musical, the story is said to have begun three years ago, not 30, like the movie. In the musical, we don't learn that Buddy's real name is William until he meets Walter [Buddy's father], Emily [Walter's wife] and Michael [Buddy's stepbrother].

"And the musical adds a subplot about little brother Michael not believing in Santa Claus."

Buddy is played by Ethan Paulini, whose past shows at the Rep include Compleat Wks of Wilm Shkspr, Avenue Q, White Christmas, The Who's Tommy and The Full Monty.

"When the musical came out, it seemed like it spoke to a lot of the skills I get called upon to use as an actor," Paulini says. "It's quirky and silly and lovable, even, so it seemed like a pretty natural fit, and then this theater took it on.

"Buddy isn't dumb or slow or dim-witted. He's just the product of different circumstances. He hasn't had the experiences a typical 30-year-old man has had. He takes things at face value, which is part of his charm but also the potential for people to misunderstand him."

Gorgone's character is a cynical girl who works at Macy's and has had bad luck with boyfriends.

"She hates Christmas at the beginning," Gorgone says. "She's had a lot of issues with all of the men in her life, but when she meets Buddy, it's kind of hard for her to continue to be mean with someone like Buddy, who always greets you with a smile."

Price is a 10-year-old fifth-grader at Chenal Elementary School in Little Rock. His previous acting roles include Tiny Tim in A Christmas Carol in 2011 at The Rep and Nipper in Oliver in 2013 for the Arkansas Shakespeare Theatre.

"My character is always a smart aleck who wants his dad to be with him and to get in the Christmas spirit," Price says.

At 1 p.m. Saturday, Family Day will be hosted by Little Rock Family, with pre-show family fun, including an Elfie Station, with interactive activities and ice cream courtesy of Loblolly Creamery. Tickets are not required.

At 9:30 p.m. Dec. 13, after the play, there will be an "after-party," with drinks and appearances by members of the cast, in Foster's. Tickets are not required.

At 7 p.m. Dec. 15, the cast of Elf will present a special cabaret, hosted by The Stagehands.

The Dec. 17 performance will be sign-interpreted by Raphael James of the University of Arkansas at Little Rock. He will be positioned in front of a new special Sign Interpreter Section that will be set up. Deaf patrons are encouraged to contact the Rep box office to reserve seating.

At 6 p.m. Dec. 18, a Girls Night Out, sponsored by Inviting Arkansas, will include pre-show shopping with boutique Southern Accented in the lobby. Tickets are not required.

At 6 p.m. Dec. 19, local musician Ben Brenner will perform in Foster's. Tickets are not required.