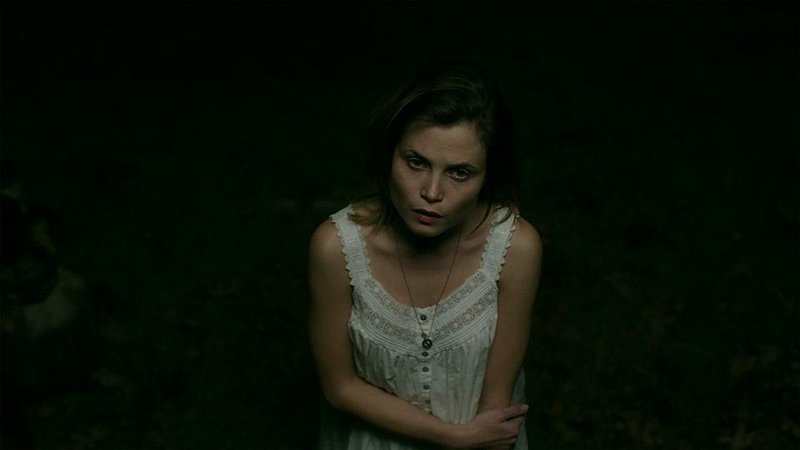 There is something in the semiotics of the publicity materials for The Sleepwalker (particularly the main poster, which features a doubled couple, the male images receding into a kind of ghostly paleness behind the rapturously twinned female) that led me to expect something like a Scandinavian twist on the Korean horror genre. I was wrong about that.

Though first-time director Mona Fastvold carries a Norwegian passport, her film is set in Massachusetts and evinces what we might call a Sundance sensibility (and indeed the movie made a bit of noise at the Utah festival earlier this year; in the U.S. it's being distributed through Sundance Selects, the even more boutique division of IFC Films).

That's a description, not a dismissal. The Sleepwalker is a low-budget, high-ambition project that edges toward dysfunctional psychological horror without relying on genre tropes. It is very well acted and as tense as a Thanksgiving dinner with your father's secret second family. If it does not quite achieve what it's aiming at (and the truth is, it's a little difficult to say exactly what Fastvold, who wrote the film with one of its co-stars, Brady Corbet, is aiming at) it manages to be a deeply unsettling experience.

It's set deep in the woods in a remarkable Bauhaus-influenced house that young couple Kaia (Gitte Witt, another Norwegian) and her construction contractor boyfriend Andrew (Christopher Abbott, in a much different role from the one he played on HBO's Girls) are attempting to restore, along with their fragile relationship. The house, which belonged to her late father, is outwardly beautiful but ravaged inside, allowing it to serve not only as one of what Swiss-French architect Le Corbusier would call "machines for living" but as a metaphor. (It's not haunted, but the characters who inhabit the movie surely are.)

Things are going well as the film opens, but Kaia and Andrew's idyll is soon broken by the unexpected arrival of her estranged sister Christine (Stephanie Ellis), who shows up in the middle of the night with her fiance Ira (Corbet), a fussy and dislikable aristocrat who works with the United Nations, in tow.

While the sisters haven't spoken in years, they begin to reconnect even though we come to understand that Christine's erratic behavior -- it's no spoiler to identify her as the title character -- has cost the family dearly in the past. (Kaia has literally been burned by her.) But that's the past, and the sisters needn't discuss it, especially not after Christine announces that she's pregnant.

Meanwhile, gentle Andrew bristles at the intrusion, and his blue-collar sensibilities clash with Ira's exquisitely curated tastes. But the couples try to make the best of it, sharing an awkward, bantering meal and dancing to instrumental Yo La Tengo in the house's vast refined space. There's an Ingmar Bergmanesque iciness to these scenes, which tilt toward mumblecore surrealism as the couples become increasingly alienated, but Fastvold is too disciplined to allow the movie to slide completely off the rails.

Then there's sex, and sleep, and the somnambulism implied by the title.

The third act is as reserved as the beautifully calibrated performances, and some moviegoers will be disappointed by what seems a fairly scant payoff to a movie that's practically all buildup. But the plot is really beside the point. What's interesting is the way Fastvold explores questions of family and class, of male insecurity and female bonding. And the way she creates and sustains mood.

While there are some obvious problems with The Sleepwalker -- it feels slight and padded at 91 minutes, and Fastvold's roots as a director of music videos (she's married to Norwegian pop star Sondre Lerche who, with Kato Adland, produced the film's appropriately dissonant score) aren't terribly well-disguised -- it's an assured first feature that seems to announce the arrival of impressive cinematic sensibility.