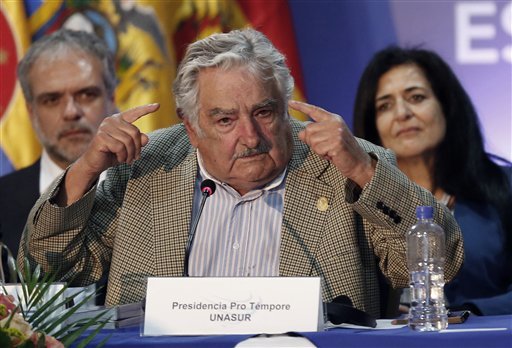 New UNASUR President Jose Mujica, President of Uruguay, left, speaks during the UNASUR summit in Guayaquil, Ecuador, Thursday, Dec. 4, 2014. Mujica is reiterating his willingness to resettle six Guantanamo prisoners in his country while calling on the United States to end its decades-old embargo against Cuba. Mujica's open letter to President Barack Obama appeared Friday on his presidency website.

MIAMI — Six prisoners held for 12 years at Guantanamo Bay have been sent to Uruguay to be resettled as refugees, the U.S. government announced Sunday — a deal that had been delayed for months by security concerns at the Pentagon and political considerations in the South American country.

The six men — four Syrians, a Tunisian and a Palestinian — are the first prisoners transferred to South America from the U.S. base in Cuba, part of a flurry of recent releases amid a renewed push by President Barack Obama to close the prison.

All were detained as suspected militants with ties to al-Qaeda in 2002 but were never charged. They had been cleared for release since 2009 but could not be sent home and the U.S. struggled to find countries willing to take them.

Uruguayan President Jose Mujica agreed to accept the men as a humanitarian gesture and said they would be given help getting established in a country with a tiny Muslim population of perhaps 300 people.

"We are very grateful to Uruguay for this important humanitarian action, and to President Mujica for his strong leadership in providing a home for individuals who cannot return to their own countries," U.S. State Department envoy Clifford Sloan said.

Among those transferred was Abu Wa'el Dhiab, a 43-year-old Syrian on a long-term hunger strike protesting his confinement who was at the center of a legal battle in U.S. courts over the military's use of force-feeding.

Uruguayan officials declined comment Sunday on the transfers. Adriana Ramos, a receptionist at a military hospital in Montevideo, the capital, said the six men were being examined there but declined to provide any details.

Cori Crider, a lawyer for Dhiab from the human rights group Reprieve, praised Mujica, a former political prisoner himself, for accepting the men.

"Despite years of suffering, Mr. Dhiab is focused on building a positive future for himself in Uruguay," said Crider, who traveled to Montevideo to meet with him and was concerned about his health after his prolonged hunger strike. "He looks forward to being reunited with his family and beginning his life again."

Ramzi Kassem, a lawyer for Faraj, said he was "deeply grateful" to Uruguay for accepting the prisoner.

"By welcoming our client and the others as refugees and free men, not as prisoners, Uruguay has shown that it truly possesses the courage of its convictions," Kassem, a law professor at the City University of New York, said in an interview from Panama.

"We hope that other countries in Latin America and throughout the world will soon follow Uruguay's example and help put an end to the U.S. government's shameful practice of indefinite imprisonment without charge or fair process," he said.

The U.S. has now transferred 19 prisoners out of Guantanamo this year, all but one of them within the last 30 days. Saturday's move brings the total number of prisoners still at Guantanamo to 136 — the lowest number since shortly after the prison opened in January 2002. Officials say several more releases are expected by the end of the year.

Obama administration officials had been frustrated that the transfer took so long, blaming outgoing Defense Secretary Chuck Hagel for not approving the move sooner. They said after Mujica had agreed to take the men in January, the deal sat for months on Hagel's desk, awaiting his signature as required by law. The Pentagon didn't send the notification of the transfer to Congress until July.

By then, the transfer had become an issue in Uruguay's political election and officials there decided to postpone it until after the vote. Tabare Vazquez, a member of Mujica's ruling coalition and a former president, won a runoff election on Nov. 30.

Upon taking office, Obama had pledged to close the prison but was blocked by Congress, which banned sending prisoners to the U.S. for any reason, including trial, and placed restrictions on sending them abroad.

The slow pace of releases has created a tense atmosphere inside the prison. A hunger strike that began in February 2013 totaled about 100 prisoners at its peak, including Dhiab and Faraj.

The U.S. now holds 67 men at Guantanamo who have been cleared for release or transfer but, like the six sent to Uruguay, can't go home because they might face persecution, a lack of security or some other reason.

Prisoners from Guantanamo have been sent around the world but this weekend's transfer was the largest group sent to the Western Hemisphere. Four Guantanamo prisoners were sent to Bermuda in 2009 and two were sent to El Salvador in 2012 but have since left.