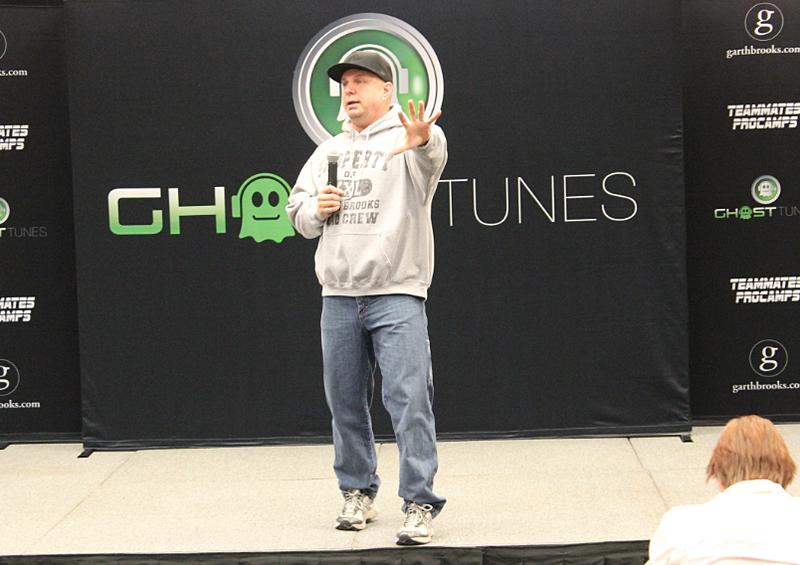 Garth Brooks speaks to reporters at a news conference before the first of his three concerts at Verizon Arena.

Country legend Garth Brooks said fans can expect a "guaranteed good time" at his run of three shows in North Little Rock's Verizon Arena, the first of which is tonight.

Brooks spoke with reporters at a news conference at the venue, taking questions shortly after landing in Little Rock and before his pre-show sound check.

"The whole thing, man, is just come with a bunch of love," said Brooks, dressed in jeans, a Garth Brooks touring hoodie and a black Garth Brooks baseball cap. "This is a love fest. Lock everything that's bothering you outside these walls, come in here, throw your head back, we'll sing real loud and have a great time."

The concerts mark Brooks' first return to play a show in the Little Rock area in more than 23 years.

He recently started touring again after a more than decade-long break to focus on family. He's playing in support of new record Man Against Machine, which debuted atop the country charts, but said fans headed to the North Little Rock shows need not worry that he'll focus too much on new material.

"You don't bomb people with new music," he said. "When I go to the concerts with the guys I love, I don't want to get bombed with new music. I came there to hear the stuff that I know them for. So we'll sprinkle it in throughout and as the tour goes on, this album will take its place like No Fences or Sevens for numbers of songs in the show."

Brooks — who was presented with an Arkansas Traveler certificate by state Sen. Jason Rapert before speaking with reporters — was initially scheduled to play just two shows at Verizon, but tickets sold so quickly that a third was added. The others are set for Thursday and Friday nights.

Brooks, who is from Oklahoma, said he didn't think twice about scheduling Little Rock shows and said this is one of a few stops that "feel like coming home."

"If [other acts] aren't coming through here, they're missing a great gem," he said. "And it just leaves more for us to come play. I'm excited to come play here."