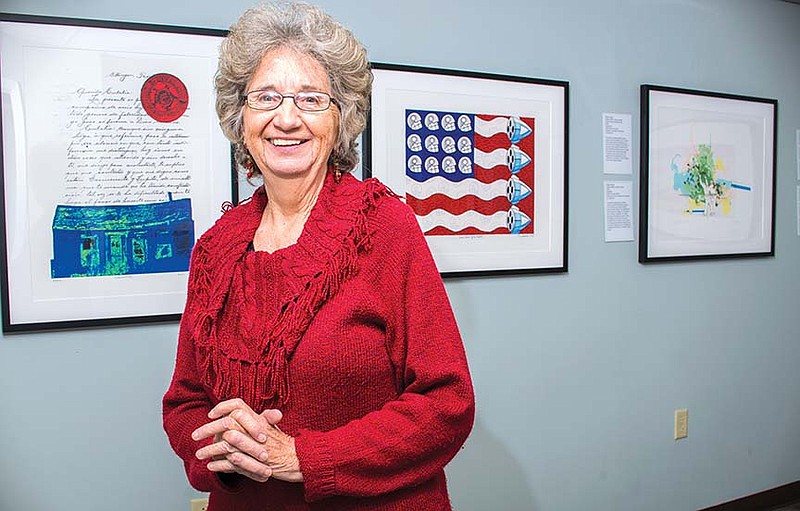 Farrell Ford, executive director of the Clark County Arts and Humanities Council, is shown with the latest exhibit on display at the Arkadelphia Arts Center titled Estamos Aqui (We Are Here), featuring work by Latino/Chicano artists. The exhibit will be on display through Jan. 7.

ARKADELPHIA — In an effort to embrace the diversity of the community, the Clark County Arts and Humanities Council is sponsoring an exhibit at the Arkadelphia Arts Center that features work by Latino/Chicano artists.

Titled Estamos Aqui (We Are Here), the exhibit includes contemporary serigraphs by 40 artists who attended an artist-in-residence program in Austin, Texas. The exhibit is a program of ExhibitsUSA, a division of the Mid-America Arts Alliance, with support from the Arkansas Arts Council and the National Endowment for the Arts.

“This is an important exhibit as far as the diversity of the community is concerned,” said Farrell Ford, executive director of the Arts and Humanities Council. “This arts center is for the community it serves.

“We have not in the past seen any emphasis on the Latino community. When we did the mural project (From a Dream to the Promise, which was also a Mid-America Arts Alliance program) two years ago, we did have some Latinos paint on that mural.”

Ford said that since then, she has “come to be friends with some of the Latino college professors at the two colleges” — Henderson State University and Ouachita Baptist University. “They have helped me in a variety of ways [with this exhibit],” she said.

She said one of the main ways these professors helped was in the preparation of the opening reception on Nov. 20 for this special exhibit.

“I wanted to reach the children” of Latino families, Ford said. “I did a flyer about the reception and got an American-Latino girl to help translate the words. The flyers were distributed by putting them into the backpacks of students in kindergarten through fifth grade, who took them home with them.

“A Taste of Latin” refreshments were served.

Ford said the artists represented in the Estamos Aqui exhibit had to learn the process of silk-screen printing.

“It’s absolutely wonderful,” she said of the exhibit. “It is very professional. It’s very ‘feeling’ from the artists’ perspectives.”

According to the Clark County Arts and Humanities Council’s website, www.ccahc.org, “Many of the artists are speaking from the Latino/Chicano perspective, and the resulting portfolio of prints expresses their celebrations, sorrows, challenges, popular culture and personal experiences.”

Bilingual gallery text and artists’ statements accompany the exhibit. Prints featured in the exhibit were selected from a larger portfolio housed at the University of Arkansas at Little Rock.

Ford said this exhibit is important. “It tells the Latino community we do things for them also,” she said.

Ford said an upcoming exhibit at the arts center will feature works by African-Americans in celebration of February as Black History Month. An exhibit of works by Delita Martin, a printmaker from Little Rock whose work has been shown at the Crystal Bridges Museum of American Art in Bentonville, will open Feb. 16.

For more information on exhibits at the Arkadelphia Arts Center or to schedule a special viewing of exhibits for classes and groups, call (870) 403-8216.