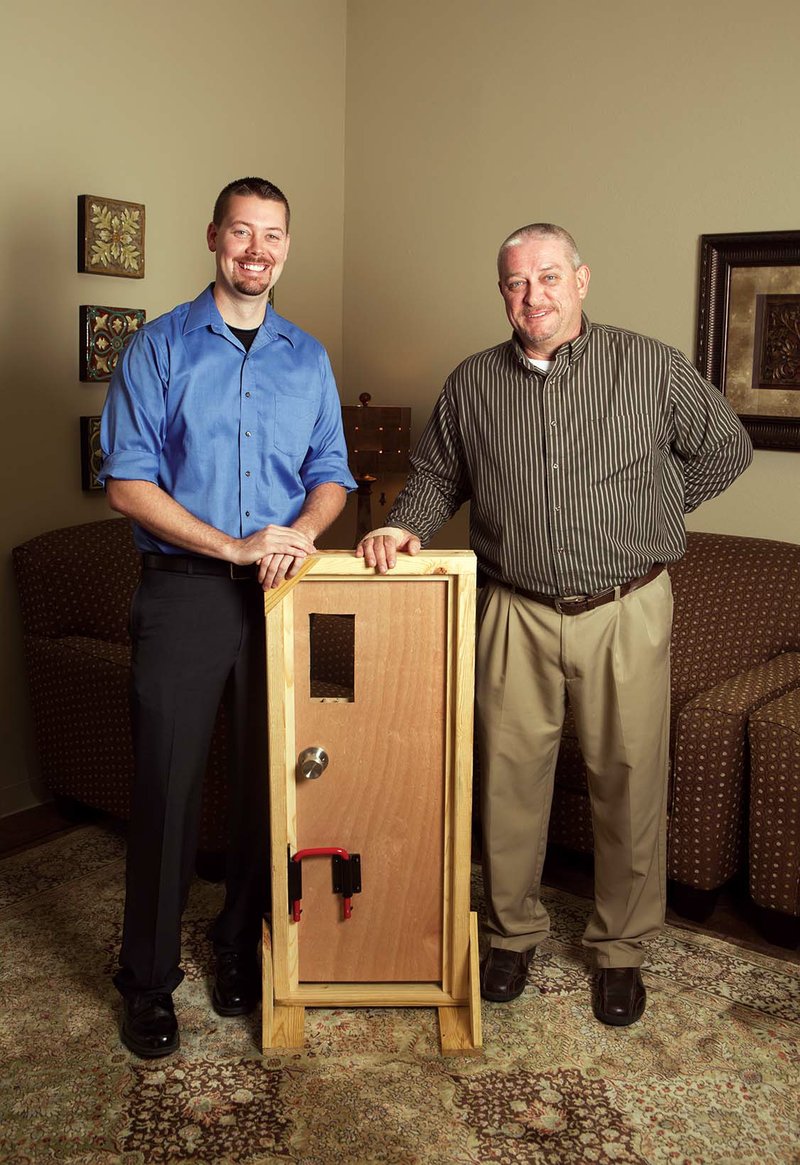 Conway school resource officer Daniel Hogan, left, and Assistant Principal Wesley Scroggin stand with a sample of a door and the security lockdown device they created and patented. The product was manufactured in Conway and rolled out this month, which coincidentally is the two-year anniversary of the school shooting at Sandy Hook Elementary School in Newtown, Conn. Scroggin said the idea of the device is to “buy time” for teachers and staff.

Officer Daniel Hogan of the Conway Police Department said he sometimes has a terrible thought when he drops off his two sons at elementary school: Will he see them at the end of the day, or will there be a school shooting?

Hogan, a school resource officer at Conway Junior High School, and Wesley Scroggin, assistant principal at Carl Stuart Middle School in Conway, have patented a door-locking device that Scroggin designed. Hogan said it could save “countless” lives during a school shooting.

The security lockdown device, or SLD, is made for interior doors of all kinds, Hogan said. The idea is to give teachers time to think and take whatever steps are needed to protect the students and themselves.

“It gives them, hopefully, that little bit clearer mindset — ‘Do I need to escape through the window?’ ‘Do I need to gather books and barricade to block bullets?’” Hogan said books can function almost like body armor. “They might be able to stop a couple of rounds. It gives [teachers] time to better help prepare themselves.”

Hinges are mounted on the inside of a door near the handle, and a U-shaped metal piece, with retractable locking devices on each side, drops into the hinges.

“People are amazed by the simplicity of it,” Hogan said.

Hogan said he, Scroggin and other Conway officials attend Arkansas Safe School Association conferences, and one in North Little Rock in August 2013 especially made an impact. The school shootings in Newtown, Connecticut, were on his mind. In December 2012, gunman Adam Lanza killed 20 children and six adults at Sandy Hook Elementary School in Newtown. A speaker at the conference was retired Army Lt. Dan Grossman, an author who has written on the psychology of killing.

“I’m going through the class, and it’s the same old stuff,” Hogan said. “Although training is great, it just felt like we weren’t taking the step I wanted to see us take. We’re a close-knit group; we happen to be sitting by each other. [Wesley] heard me spitballing. I started focusing on barricading a door quickly, and basically that’s where we started coming up with our security lockdown device. We started fine-tuning and developing it.”

Scroggin, who previously taught industrial technology and drafting, said, “I started drawing up plans and redrew and went and had a prototype made.” The Conway School District’s Conway Area Career Center made the first one, and the final version was engineered by Conway Machine Shop.

“Ours takes out all the electronics, magnets,” Hogan said. “The only thing it depends on is gravity.”

It takes two hands to compress the locks on each side to remove it. Even if a window of a classroom door was broken, the men pointed out, a shooter would have to reach in with both hands to try to pull out the device.

It doesn’t need electricity to work, either, Hogan said.

Hogan said they suggested that the security-locking device be kept in a drawer or cabinet where only school officials would know where to find it, in case of an emergency, so that a student couldn’t lock down a classroom. Hogan said teachers don’t have the training that law enforcement officials do, which is why he and Scroggin wanted a simple device.

“We want the teachers to focus in on teaching kids. We want it to be simple, something they can quickly deploy and [that puts] them at a little bit of peace of mind,” Hogan said.

Scroggin said the possibility of a school shooter is on the minds of teachers and administrators “all the time.”

He said schools have active-shooter drills, and using the security lockdown device could be part of the exercise so that teachers feel comfortable with the procedure.

“Teachers have been found shot next to the door with keys in their hands,” Scroggin said. This device is easier and faster to use, he said. “It’s about buying time.”

Hogan said that in two instances in the Connecticut shooting, the killer walked into a classroom, “and evidence showed the teacher was on her way to lock the door. The other one showed forced entry. In both of those cases, I seriously believe what we developed could have been deployed quickly and saved countless lives.”

To demonstrate the lock’s effectiveness, the device was secured to a classroom-type door, and the Faulkner County SWAT team tried to breach it. A video of the results was posted to YouTube.

“Our lock had been shot at with 100-plus rounds with everything from a 9 mm pistol to an AR23 rifle. … Our product stayed in place,” Hogan said. Only after the SWAT team hacked the wooden door several times with a sledgehammer was the door breached, he said, and the device was still intact.

The product was rolled out this month, and a website for the lock is still being developed. In the meantime, more information is available from Hogan via email at dhogan@ulockitsecurity.com.

In addition to inventors Hogan and Scroggin, partners in the company ULockit Security include state Sen. Jason Rapert, R-Conway; attorney Ted Thomas of Conway; and Faulkner County Justice of the Peace Randy Higgins of Greenbrier, a former reserve deputy. Hogan said they were chosen because of their knowledge, as well as their drive.

Rapert said Hogan and Scroggin approached him asking about investing in the device. Rapert’s wife, Laurie, is a former public schoolteacher and now home-schools the couple’s children. However, the students meet together in cooperative academies, he said.

He said not only would the device be valuable for schools, it could be used in any place where large

gatherings are held and weapons aren’t allowed, such as churches. Rapert said he sees the device as an option for homeowners, too.

When he saw the invention, “I thought of the paperclip,” Rapert said. “You look at the device and say, ‘Wow, why didn’t I think of this?’”

Hogan said the devices will be sold for $120 per unit. Hogan said every school in Faulkner County, public and private, has been contacted with information on the lock, although only a couple have been visited thus far. He said there is “definitely interest” in the product among educators.

“Conway has gotten back with us and said they want to institute it in the five-year safety program they have,” Hogan said.

“You could have a PTO fundraiser and have your whole school equipped,” Scroggin said.

“The biggest aspect of it is … if this can save just one life,” Hogan said. “It’s not about making all this money; it’s about this [product] being there.”

According to Everytown for Gun Safety, 49 school shootings have occurred at K-12 schools and 45 at colleges and universities since the Newtown shooting, including fatal and nonfatal assaults, suicides and unintentional shootings.

“I wanted to do that ever since I became a police officer. That was my goal where I wanted to go in my career,” he said.

Hogan, who is on leave to spend time with his newborn daughter, said he had bittersweet affirmation about the design of the security locking device. He met with some of the parents from Sandy Hook and showed it to them.

“We actually sat down with parents from Sandy Hook and let them know what we’re doing and had very positive feedback from them. One mother said if they had had [our device] on the door, she thinks her daughter would have survived,” he said.