A culture of clickers defines dictionary's words of 2014 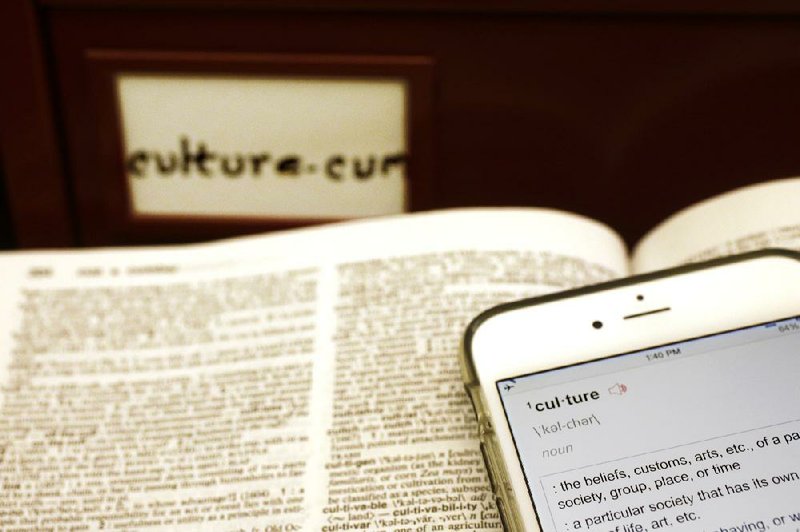 Merriam-Webster’s 2014 word of the year is “culture.” Merriam-Webster based its pick and nine runners-up on significant increases in lookups this year over last at its homepage.

NEW YORK -- A nation, a workplace, an ethnicity, a passion, an outsized personality. The people who make up these things, who fawn or rail against them, are behind Merriam-Webster's 2014 word of the year: culture.

The word joins Oxford Dictionaries' "vape," a darling of the e-cigarette movement, and "exposure," declared the year's winner at Dictionary.com during a time of tragedy and fear due to Ebola.

Merriam-Webster based its pick and nine runners-up on significant increases in lookups this year over last on Merriam-Webster.com, along with notable, often culture-driven -- if you will -- spikes of concentrated interest.

In the No. 2 spot is "nostalgia," during a year of big 50th anniversaries pegged to 1964: the start of the free speech movement, the passage of the Civil Rights Act, the birth of the Ford Mustang and the British Invasion heralded by the landing of the Beatles on U.S. soil for the first time.

Nostalgia was followed by "insidious," "legacy," "feminism" and a rare multiword phrase that can be looked up in total, in a foreign language at that: the French "je ne sais quoi."

The Springfield, Mass.-based dictionary giant filters out perennial favorites when picking word of the year, but does that formula leave them chasing language fads?

"We're simply using the word culture more frequently," says Peter Sokolowski, editor at large for Merriam-Webster. "It may be a fad. It may not. It may simply be evolution."

Sokolowski notes that the reasons words are looked up aren't just about not knowing what they mean. Sometimes, he said, we seek inspiration or a way to check in on ourselves. Of more than 100 million lookups on the website each month and a similar number on the company's app, culture enjoyed a 15 percent year-over-year increase.

Percentagewise, it doesn't sound like much, but the raw number in that stratosphere is large, Sokolowski says. He wouldn't disclose actual numbers, though, citing the proprietary nature of that data for a company still privately held.

Sokolowski is a lexicographer, not a mind reader, so his observations about why any single word takes off in terms of lookups are well-informed but theoretical.

"The word culture's got a cultural story. We have noticed for years that culture has a cyclical spike every year around Labor Day. That is to say back-to-school time during the month of September, so we've been watching this word spike at that time for years," he says. "In recent years we've seen similar spikes at the end of semesters during finals."

But traffic throughout the year indicates that culture is a "chameleon," Sokolowski says. "When you put it next to another word it means something very different. For example, 'consumer culture' or 'rape culture,' which we've been reading about lately."

There's the "culture of transparency" in government and business, and "celebrity culture," and the "culture of winning" in sports, he notes. "It's a word that can be very specific, like 'test prep culture,' or it can be very, very broad, like 'coffee culture.'"

One standout reference that caught Sokolowski's eye in The New Yorker's December issue is from a new book, How Google Works, which includes a description of a software fix by a few engineers that made ads more relevant on the search engine:

"It wasn't Google's culture that turned those five engineers into problem-solving ninjas who changed the course of the company over the weekend," wrote the authors, former Google Chief Executive Officer Eric Schmidt and former head of product development Jonathan Rosenberg.

"Rather it was the culture that attracted the ninjas to the company in the first place."

Not all lookup spikes are quite that complex. The reason "je ne sais quoi" landed at No. 6, for instance, is "dead simple," he says.

The fast-food drive-in chain Sonic, known for TV spots featuring two goofy dudes eating in a car, had them munching on boneless chicken wings in September.

"I've finally found myself a wingman," goofy guy No. 1 says of the wings he hopes will make him a chick magnet.

They mine the word play a couple more times, but you get the picture.

"Since September when this ad came out, this word has been close to the Top 10 or in the Top 10 of our lookups almost every single day," Sokolowski says.

Fast-food aside, he called this year's list a relatively sober one.

Insidious, for example, received a bump early in the year when a new trailer was released for Insidious: Chapter 3, a prequel in the horror film franchise Insidious, out in June. The word surfaced in a big way again, on Oct. 8, when a Texas hospital released a statement on the death of Thomas Eric Duncan, the first confirmed Ebola patient in the United States.

The statement spoke of his courageous battle and the hospital's profound sadness when he "succumbed to an insidious disease, Ebola."

Rounding out the Top 10 are innovation, surreptitious, autonomy and morbidity.

Print Headline: A culture of clickers defines dictionary's words of 2014