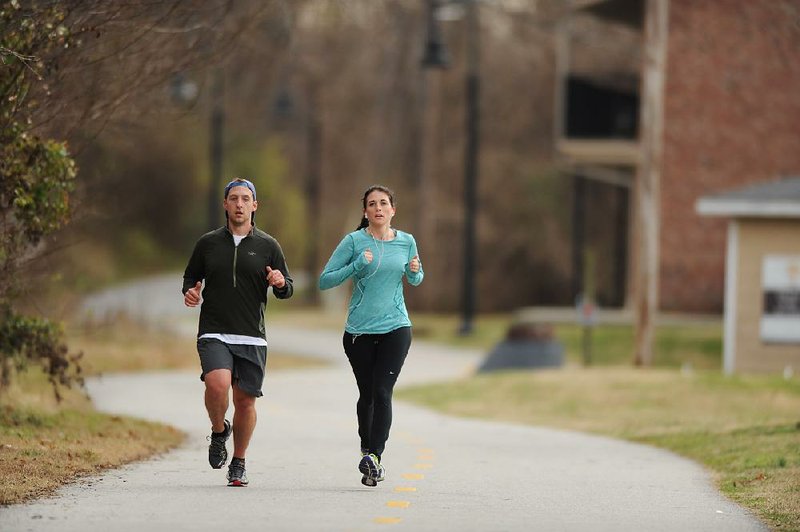 The final 8-mile leg of construction on the 36-mile Northwest Arkansas Razorback Regional Greenway is within sight, but officials say its completion is only the beginning of a new trail culture in Northwest Arkansas. 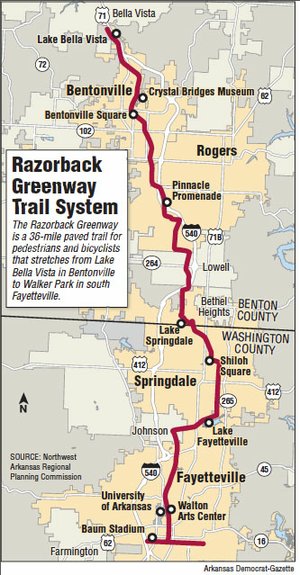 "The greenway is the spine of a broader system," said Misty Murphy, Northwest Arkansas Council's regional trails coordinator. "It is the catalyst for the future."

About 28 miles of the trail connecting South Fayetteville to North Bentonville will be completed before Thursday. The last 8 miles in Springdale and Lowell are scheduled to be completed by spring.

The next step is to expand a network of city trails to connect to the greenway, Murphy said.

Twenty-five cities in the region have agreed to adopt individual community trail plans by early next year.

City plans will expand 68 miles of multiuse trails that already connect to the greenway, said John McLarty, of the Northwest Arkansas Regional Planning Commission. The cities' multiuse trails are paved and often 10 feet to 12 feet wide, he said.

At some locations, these trails connect to about 100 miles of natural surface trails constructed in Benton and Washington counties, Murphy said. There are already existing plans to connect about half of the trails to the greenway. Natural surface trails are not paved and are often used for mountain biking, trail running or hiking.

McLarty said the trail is designed to help connect people not only to other communities but also to points of interest such as natural surface trails, hospitals, colleges and museums. Trails built by cities in the region will help the greenway reach the goal of intercity connectivity.

Fayetteville has about 40 miles of paved trails, said Dane Eifling, bicycle coordinator for Fayetteville. He said the city has been expanding its trail system by about 2 to 3 miles per year.

"About 64 percent of our population is within a 10-minute walking distance of a trail," Eifling said. "We have a crew of city employees whose job is to build trails."

The trails improve the quality of life for Fayetteville residents, Eifling said.

"People recognize them as an asset," Eifling said. "I think they are becoming a part of Fayetteville's identity."

The greenway is also helping people in other communities connect to Fayetteville, Eifling said.

"It is the pedestrian version of an interstate," Eifling said. "It is big, wide and well marked. You can get on it and cover a lot of distance."

David Wright, Bentonville parks and recreation director, said Bentonville also has plans to expand its existing trail system. The city has about 20 miles of soft surface trails and 25 miles of paved trails.

Bentonville plans to connect the northern portion of the greenway near the city's dog park to Harps grocery store, located on North Walton Boulevard.

"Our trail system is really good at connecting on the east side of Walton Boulevard," Wright said. "This will get us west of Walton. We are not really on the west side of town."

Wright said there is a strong business presence on North Walton Boulevard.

"There are a lot of businesses and cash registers there," Wright said. "There is a lot of incentive there for the merchants and the trail users."

Wright and Eifling said the trails have an economic value for their communities.

Springdale also sees an economic boost from the greenway, said Bill Rogers, spokesman for the Springdale Chamber of Commerce. He said the trail isn't complete yet but private investors are already working on business plans to be near the trail.

"When you add it all up we have about $2.6 million in private investment that has occurred in downtown Springdale, mostly in 2014, but certainly since the announcement of the greenway trail," Rogers said. "I think what we have seen is just the first wave of economic impact with more to come."

Groups such as Springdale Downtown LLC, Restore Springdale and Tyson Foods are a few that have invested in the recent past, Rogers said.

"Very little of this could have occurred if the greenway trail had not happened," Rogers said.

Murphy said it is hard to measure the improvements a trail system brings to a community.

"How do you quantify having a healthier community that people want to live in," Murphy said.

"When you are in a car you don't see the people you pass by," Murphy said. "It is getting away from people seeing themselves as an individual and moving toward people seeing each other as Northwest Arkansans."

"Trails ranked alongside amenities like the Walton Arts Center, The Jones Center and Crystal Bridges Museum of American Art as contributing to an overall high perception of quality of life in Northwest Arkansas," Thornton said. "These results helped validate the foundation's commitment, both historically and in the future, to funding trail projects in the region."

The Walton Family Foundation has awarded about $18.2 million to the greenway project. Another $15 million came from federal grants, McLarty said. Other funds came from small cities and private contributors.

McLarty said it cost about $1 million a mile to build the greenway.

Murphy said future plans for the greenway include promoting and educating the public about the region's trail system. Merchandise such as T-shirts is one way the trail will be marketed.