Thanks to city Employee of the Year Tracy Roark, Little Rock’s stray animals are getting a new leash on life. by Jack Schnedler | December 28, 2014 at 2:56 a.m. 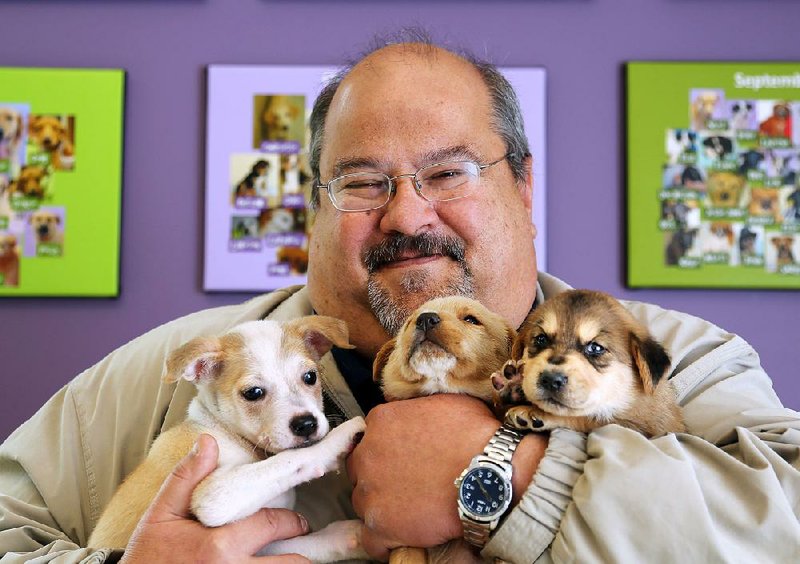 Statistics can be a cold way to start a story. But here are a few eye-popping numbers that bring into focus the life-saving achievements of Tracy Roark, Little Rock's Employee of the Year. In 2003, the year before Roark became manager of the city's Animal Services Division, its pound-like facility euthanized 3,147 dogs and cats. It sent a mere 386 to new homes. The ratio of death to survival was a ghastly 8-to-1.

Last year, the renamed Animal Village found new families in Arkansas and elsewhere for 2,263 dogs and cats, while returning 343 more to their current owners. The euthanasia total was 1,618. This year's incomplete figures are in the same range, meaning that survival is now far more likely than death.

The remarkable turnaround is even more impressive for a municipal agency mandated by law to capture and dispose of the city's numerous and sometimes vicious strays. They include the hardest of hard cases, which account for a good portion of those that still can't be saved.

"When I started here, I was scared," says Roark, who served at first as interim manager. "The job seemed overwhelming. And when I walked through the first time, I saw a lot of scared animals. I could see that they weren't getting what we should be providing for them -- loving care."

That need "really dawned on me the first time an angry dog came in that just wanted to tear everything up. After a couple of days of being decently treated, he was coming to me and enjoying me and I was enjoying him.

"That made me realize I had something to give to animals. They have a heart. They think. And they realize when they're being treated well."

There also has been a big change in the animal population at the home that 50-year-old Roark and wife Cheryl share near Wye, west of Little Rock.

Parents of a daughter and son, they moved to the scenic hill setting a decade ago with two pets: Montana, "an independent-minded huskie," and cat Mabelle, "the queen and my wife's true love."

Now five dogs and four cats are part of the family. The seven additions all came from Animal Village.

Dogs Dan and Gus are Cardigan Welsh corgis, while Amber is a mixed breed "that smiles when she does something wrong." Otter is a rottweiler-hound mix "that came into the village so scared he broke my heart and ended up with us. He is the most grateful dog you have ever met."

Among the three added cats, Purple Stick "is a foster we just fell in love with." Myrtle "is a kitten that my wife bottle-fed from less than a week old." Phoebe "is my wife's sister's cat, whom we're caring for."

City Manager Bruce Moore, who presented the Employee of the Year award in May, says Roark's "ability to love and care for every dog and cat that comes into our Animal Village is unmatched. He is one of the most caring individuals I have ever worked with."

Moore remembers that Roark went to the Animal Village reluctantly from his previous city position as housing code enforcement supervisor.

"A few months later," says the city manager, "he told me it was the right decision because now he could make a difference in the life of an animal every day."

The initial reluctance, says Roark, came because "I had heard about the problems with staff, rumors of poor animal care, illness and nothing to gain but a bad reputation. I would have taken failure personally."

The facility, then called Little Rock Animal Shelter, was located in a 50-year-old structure at Interstate Park.

"It was run like a pound," Roark says. "Dogs came in and dogs went out, and it was not really a caring or loving place. There was an adoption program, but it was nowhere near as aggressive as we have become."

Caring for animals is part of his boyhood memories as a native Texan whose family moved to North Little Rock when he was 2, and to Lonoke eight years later.

One of seven brothers, he had a black-and-white cat called Thomas "that I think of as my first real pet." Parents John and Jerry Roark, who are still living, had a number of chow dogs. The first was named Ling.

"He bit me on the arm while we played," Roark remembers. "I startled him and he took a bite. I still have the tooth marks on my arm. But I know it was my fault."

After graduating from Lonoke High in 1983, he worked for seven years as an estimator for a construction company. His father and brothers, three of them now dead, started a building business while Tracy went his separate way.

Roark's construction experience proved valuable during the planning and erecting of the $2.2 million Animal Village that opened in 2007 at 4500 Kramer St., a bit south of the University and Asher avenue intersection. About half that sum came from a voter-approved bond issue, the rest via private fundraising.

"With my background, I knew how to read blueprints," he says. "Working with the designer from Boston, we wanted architectural features that would stand out. We wanted the facade to be inviting. We wanted the color neutral on the outside, but very warm and inviting inside."

Animal Village contains 105 kennels for dogs and 40 for cats. The canine and feline population ranges from 180 to 220. Every so often, there's a horse, goat, pig, snake or some other species.

"We're pretty much full every day," Roark says. "We work hard to encourage adoptions -- to do everything possible before we have to make any of the hard decisions."

By hard decisions, he means euthanizing, "which we do as the last resort. It's the most difficult part of my responsibilities. But I'm proud to make those decisions myself. I want to make them, not to leave the job to my staff."

The criteria, he explains, "is based first of all on the animal's temperament. Then we look at health, then unfortunately we have to look at breeds that might be hard to place. Seldom do we get to the point where we have to consider putting the really adoptable animals to sleep."

A growing part of placement is sending dogs for adoption to other parts of the United States, mainly through the Rescue Waggin' program operated by PetSmart Charities.

"We're really proud of our relationship with PetSmart Charities," Roark says. "We have sent almost 2,000 dogs to other states. PetSmart drivers pick up our animals twice a month. And the drivers have named us their favorite shelter out of the 50 or more that they service."

Playing a major local role to promote adoptions is Friends of the Animal Village, organized several years ago by lawyer Cindy Dawson. It supports the facility with fundraising events and activities, which brought an anonymous $100,000 donation last year. That money is going to build a new quarantine area.

Stacy Sells, a Friends of the Animal Village board member, says it's always a pleasure to work with Roark.

She adds that he "has taken what was once a typical city shelter, nothing to be proud of, and turned it into a national model for breaking the status quo. He has shown the city there's a different way -- and that is to focus on saving lives, giving these pets a second chance."

Dogs and cats available for adoption are pictured and described on the group's website, friendsoftheanimalvillage.org. Animal Village also has a Facebook page.

An adoption costs $90, which includes medical services from the village's full-time veterinarian, Dr. Brian Vandegrift. On occasion, discounted or free adoptions can be arranged.

"Our goal is making it easy to adopt," Roark says. "We want people to come to us, because if a dog or cat leaves here, it is going to be sterilized. You can get an unsterilized animal free from an ad somewhere, but it will continue to breed in a vicious cycle. There are already way too many animals without homes."

About 30 regular volunteers play a needed role at the village, with duties that range from walking dogs and playing with cats to bathing animals. A workshop for new volunteers takes place the second Saturday of each month.

"Our volunteers really do a lot in making this a welcoming place for our animals and for everyone who comes to adopt," Roark says.

He has abundant praise as well for his dozen employees, especially so for field supervisor Bernard Bracely.

"Bernard was on the staff when I came here," he says. "I'll never forget the Thanksgiving Day after I had just taken the job. I got a call at home from him saying he had dropped by and the shelter was poorly cleaned. I met him there and we spent our holiday afternoon taking care of the animals.

"From that day on, I knew that Bernard was the best man I could ever ask for to help turn the shelter around. He is a hero for the animals of this city."

"Hero" is a word diminished these days by overuse. But it could comfortably fit Roark as well, considering the thousands of dogs and cats who've literally been given new life thanks to his loving care.