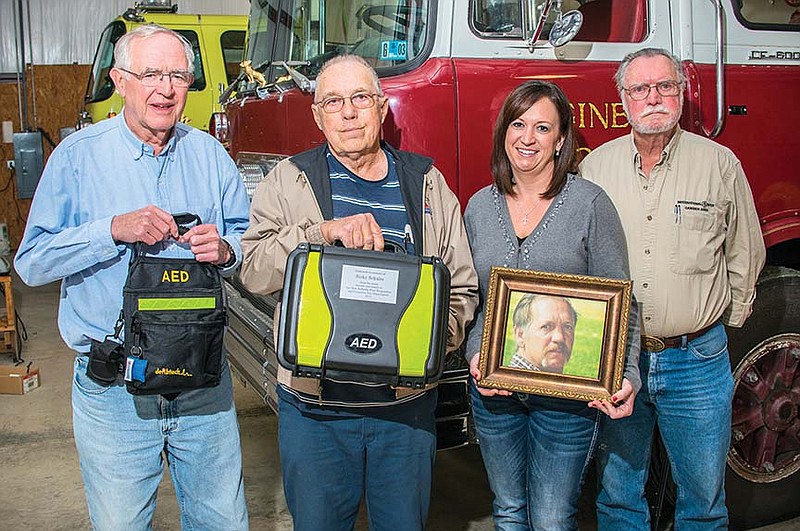 Tesa Schales Naylor does not want anyone to have to go through what she had to on the night of Oct. 11.

“Ricky Schales, my dad, suffered a major heart attack and died in our hands,” said Naylor, who is a registered nurse.

Naylor, who lives in Alexander, visited her parents that day, and shortly after her arrival, she found her father in distress. Her mother, Linda Schales, called 911, and Naylor called her sister, Cristy McClard, who lives nearby in Glen Rose.

“I had asked the first responders [from the New DeRoche Volunteer Fire Department] for an AED (automated external defibrillator), but they didn’t have one,” she said. “‘OK,’ I think. ‘The ambulance will be here soon.’”

As the first responders unpacked their equipment, Naylor and her sister started rescue breathing on their dad. Naylor checked her dad for a pulse.

“I can’t find one,” she said. “My brain is still in the daughter role.

“I stutter, ‘I can’t find a pulse,’ and my brain immediately stalls. Odell, the first responder, says, ‘Start CPR.’

“Gone. … The family/daughter part of my brain is now not active,” Naylor said. “I am in nurse mode, and I am following the CPR algorithm. … As I am doing CPR, I hear … a siren. I feel relief; the siren is coming. They will have what I need.”

The ambulance took her father to a hospital in Hot Springs.

“Shortly thereafter, the [emergency department] physician notifies us that Dad has expired,” she said.

Naylor said she cannot know for certain that an AED would have saved her father’s life, but she knows it would have given him a better chance. Her parents live just four doors down from the Volunteer Fire Department, and the first responders were there quickly.

Information from the National Heart, Lung and Blood Institute’s website, nhlbl.nih.gov, defines an AED as “a portable device that checks the heart rhythm and can send an electric shock to the heart to try to restore a normal rhythm. AEDs are used to treat sudden cardiac arrest (SCA).

“SCA is a condition in which the heart suddenly and unexpectedly stops beating. When this happens, blood stops flowing to the brain and other vital organs.

“SCA usually causes death if it’s not treated within minutes. In fact, each minute of SCA leads to a 10 percent reduction in survival. Using an AED on a person who is having SCA may save the person’s life.”

Naylor said she was “floored” that “this piece of elementary lifesaving equipment” was “out of reach” on the night her father died.

Within hours of his death, word reached Naylor’s co-workers and friends.

“Later that night, I received a text message from a co-worker,” Naylor said. “She typed, ‘I want u 2 consider allowing some of us — ur medical friends, 2 donate an AED in his honor 2 ur community.’

“I responded, ‘I had the same idea.’ And a mission was created.”

By the time of her father’s funeral on Oct. 15, the goal of $1,500 had been raised, and more donations would come.

“The donations flowed in from across the United States,” Naylor said. “Medical personnel I had worked with over the years, family, anonymous donations, people I have never even met, graciously gave out of their hearts to support this initiative. This outpouring of love has carried me through my grief.”

By the time all of the donations were received, Naylor and her friends had raised almost $2,700.

Naylor purchased two AED units for the small rural fire department in New DeRoche, which is near Bismarck in Hot Spring County.

“We received enough donations to upgrade the carrying cases for the units and purchase an ample supply of AED supplies, including extra patches and batteries,” Naylor said.

A dedication ceremony for the equipment was held Dec. 1 at the fire station.

“They were very grateful.” Naylor said. “I voiced that often, being a first responder or medical person is sometimes a thankless job, even though you went above and beyond to save another person’s life.

“I told them we were there to thank them for the service that they provide and their assistance with our tragedy.

“The first responders are already AED certified. They have been maintaining this certification every two years. However, prior to now, they have not had an AED to utilize in emergency situations. Hopefully, they will now feel supported, as well as better prepared for the next emergency call.”

later said, “Something good always comes from something bad.

“We had talked about purchasing an AED but never had the money. We were certainly glad to get them.

“We have about a dozen firemen and three first responders, and that’s not enough.”

John Nannemann, president of the New DeRoche Volunteer Fire Department Board of Directors, said, “One of the [AED] units is with the main first responder, and one is in the front seat of the rescue truck.”

Leslie Burris, secretary-treasurer of the board, said the Volunteer Fire Department, which was organized in 1980, has about 350 members.

“We have more medical-emergency calls than anything else,” Sullivan said. “We also respond to a lot of grass fires.”

Naylor said she hopes “to encourage other rural communities to ask the question, ‘Do we have an AED with our volunteer fire department?’

“It’s all about saving lives. We have truly turned a tragedy into a victory. Our mission from the beginning was to save the next person’s life. I truly believe that we will.”