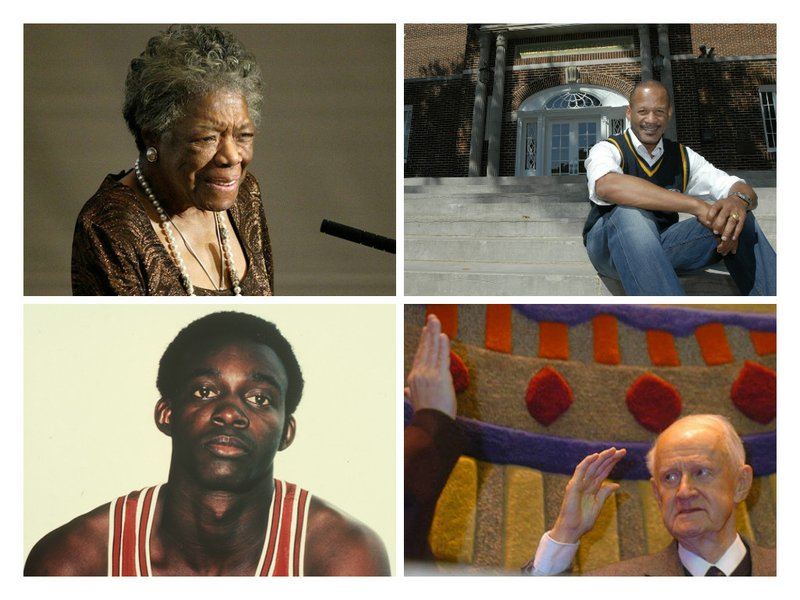 A renowned poet who overcame childhood tragedy to write one of the most widely read memoirs of the 20th century and later recited poems for Presidents Bill Clinton and George W. Bush was among notable Arkansans who died during 2014, along with a veteran state lawmaker and a banker who served as Clinton's chief of staff while the state governor ran for president.

Maya Angelou, author of "I Know Why the Caged Bird Sings," died May 28 in Winston-Salem, North Carolina. She was 86.

Angelou was born Marguerite Johnson in St. Louis and raised in Stamps, Arkansas, and San Francisco, moving back and forth between her parents and her grandmother. Her childhood included being raped by a family friend when she was 7.

In 1993 she read her "On the Pulse of the Morning" at Clinton's first inauguration and made publishing history when the poem became a best-seller. For Bush, she read "Amazing Peace," at the 2005 Christmas tree lighting ceremony at the White House. She was honored with a National Medal of Arts and the Presidential Medal of Freedom, the country's highest civilian honor, and an honorary National Book Award.

"I'm not modest," she said in 2013. "I have no modesty. Modesty is a learned behavior. But I do pray for humility, because humility comes from the inside out."

William H. Bowen, who retired as chairman and CEO of First Commercial Bank to become then-Gov. Clinton's chief of staff during his first presidential race, then served as dean of the University of Arkansas at Little Rock School of Law in 1995, which is now named after him, died at age 91 in November.

Longtime state Rep. John Miller, 85, died at his home in Melbourne in June. A Democrat, he served in the state House for 40 years and as House speaker in 1979-80. He was considered an expert on state finances.

"John Miller was one of the men who taught me how Arkansas's budget worked when I arrived in the Senate," Gov. Mike Beebe said in a statement after Miller's death.

Andrew McDonald, the longtime Roman Catholic bishop of Little Rock who led the statewide diocese from 1972 until 2000, died in April at age 90.

As part of post-Vatican II reforms, McDonald reinstated having permanent deacons in 1978, opening a consecrated life to married men. He invited Mother Teresa to open a home for unwed mothers in Little Rock and worked across theological borders, promoting a Billy Graham crusade at War Memorial Stadium in 1989.

The entertainment world saw the death of Broadway star Lawrence Hamilton, a Foreman native who died at age 59 in New York City. Hamilton was a member of both the Arkansas Black Hall of Fame and Arkansas Entertainers Hall of Fame.

In sports, Almer Lee, the first black basketball letterman at the University of Arkansas before injuries ended his career, died in November. Golfer Jack Fleck, who defeated Ben Hogan in a playoff to win the 1955 U.S. Open, died in November in Fort Smith.