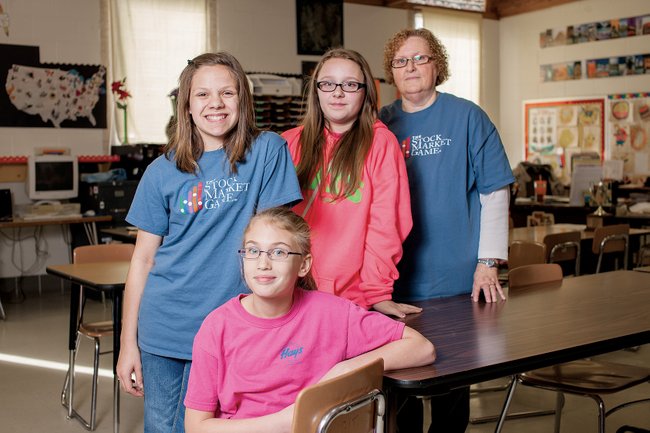 Dee Gaskins’ gifted-and-talented students competed in the Stock Market Game against more than 130 other junior investors from Arkansas in grades four through 12.

Groups from Gaskins’ seventh- and fourth-grade classes placed first in the junior high division and second in the elementary division, respectively.

“We’ve done the game since 2008,” Gaskins said. “[My classes] have won first place three times. I’m not a pro at it; I’m very financially illiterate. I show my students what to do, and they do it.”

Gaskins found out about the game at a workshop she attended.

The Stock Market Game gives students a chance to work independently on their “stocks” and doesn’t require a lot of classroom instruction.

“The kids can do it on their computers at home. They don’t have to do it at school. They get their codes and passwords, and they can do it anywhere,” Gaskins said. “I teach them about ticker symbols and how to look at the 52-week range.”

When students play the Stock Market Game, they get $100,000 of fictional money to invest in stocks over two months.

“They get to check their rankings and decide if they want to sell a stock that’s not performing well or buy another stock. When their time is up, the winners are whoever has made the most money,” Gaskins said.

Jenna Sablotny, Kyndal Dollar and Makayla Barnhill made up the fourth-grade team that won second place in Region 4.

“We were excited [when we got second place],” Jenna said. “I was like, ‘Really? Seriously?’”

The first- and second-place groups from the elementary, junior high and high school divisions from the six regions of Arkansas attended an awards luncheon at Verizon Arena in North Little Rock on Jan. 16 to receive their awards.

Gaskins said teachers and students can view their rankings throughout the competition and see how they place statewide. Gaskins’ fourth-grade group received a certificate, $50 to split among the three members and a medallion.

The group of fourth-graders said the best stock they bought during the game was Apple.

“We kept checking and checking to see if they were going low or going high. If it went real low, then we let go of it,” Jenna said.

Gaskins is the GT teacher for kindergartners through 12th-graders in McCrory. She said she plans to retire after this school year.

“We usually just do [the Stock Market Game] in the fall, but I’m letting my fourth-grade students play in the spring because I’m retiring, and I’m not sure if they’ll get another chance,” Gaskins said.

Though the students get to learn about the stock market while they play the game, the teachers also learn their fair share of facts while their students do the same.

Jakob Canseler, Peyton Hampton and Rainy Winberry made up the seventh-grade group, which came in first place for Region 4’s junior high division in the Stock Market Game.

The first-place group received a trophy and $100 to split between the three students.