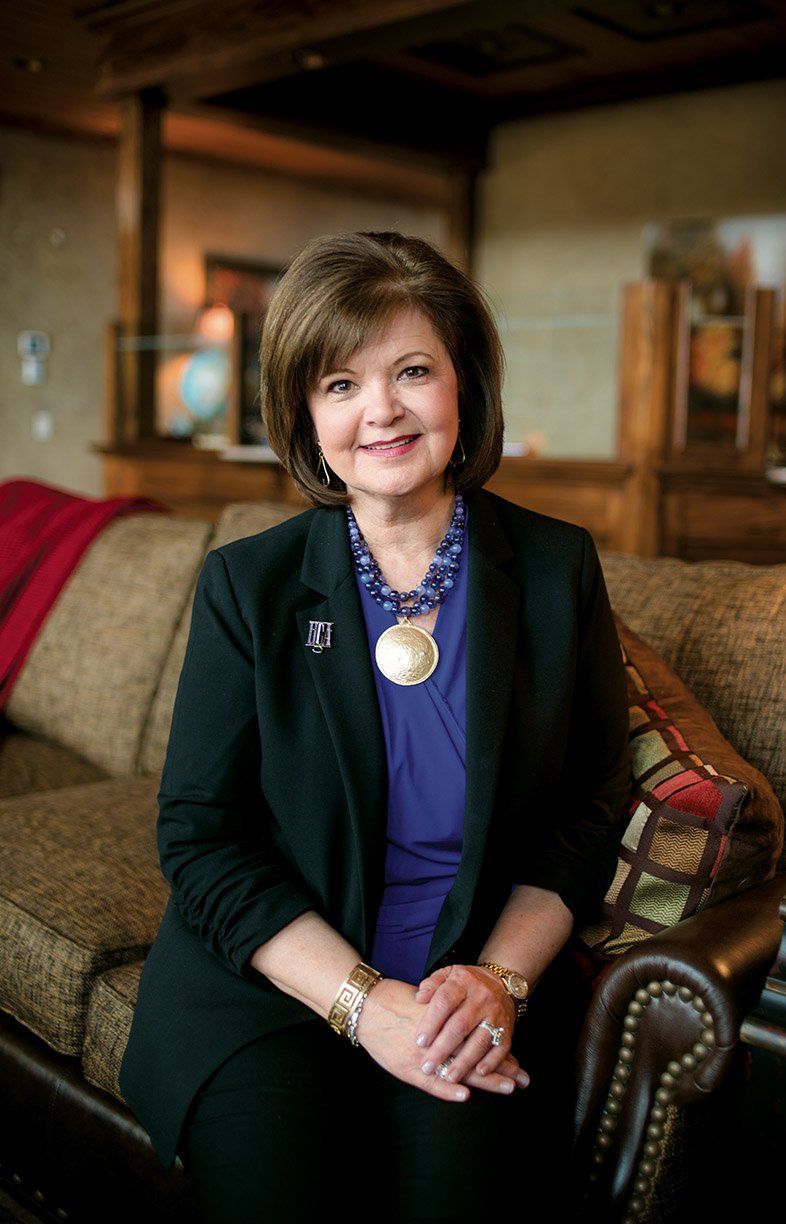 Kay Hinkle of Mountain View was recently elected chairwoman of the University of Central Arkansas Board of Trustees. This marks the 10th year she has served as a member of the board. Her current term will expire in January 2018.

Kay Hinkle’s parents always stressed the importance of giving back. Whether it’s to her community of Mountain View or to her alma mater, the University of Central Arkansas in Conway, she has done just that.

Most recently, Hinkle, 65, was elected chairwoman of the UCA Board of Trustees. This marks the 10th year she has served as a member of the board, which includes seven members appointed by the governor and approved by the Arkansas Senate. Her current term will expire in January 2018.

Hinkle was first elected chairwoman of the board in 2007. During that year, UCA reached an enrollment of 12,600 students, established the Master of Science degree in instructional technology and dedicated the newly constructed student health center.

“We can grow to 13,500 without any additional infrastructure and without adding a lot of faculty and staff,” she said.

She said UCA is expected to complete the expansion of the Heath, Physical Education and Recreation Center this fall and hopes to break ground on the first phase of a Greek Village project this spring.

“We also hope to renovate the Lewis Science Center,” she said.

Born in Malvern, Hinkle is the daughter of the late Dewey and Marcille Stiles. Hinkle has one living brother, Gary Stiles of Hot Springs.

She graduated from Malvern High School in 1966 and headed off to college in Conway.

“That was the first time I had ever been away from home,” she said.

When Hinkle entered college, it was known as Arkansas State Teachers College. In 1970, she graduated from State College of Arkansas, the precursor to UCA.

While at college, Hinkle met her husband, Jim, who is a native of Mountain View. She graduated with a Bachelor of Science degree in business, which at that time, she said, meant “shorthand and typewriting.”

“He attended four years of college but did not graduate,” she said. “After I graduated, we moved to Mountain View, and he went to work in the family business.”

Hinkle said she tried to get a job with the Mountain View School District, “but they already had a business teacher.

“So I went to work at the telephone company,” she said. “I also taught school for a couple of years, filling in as a substitute. Then I started an antique, gift and needlework shop called The Country Corner. I did that for 12 years.”

Hinkle said the Stone County Scholarship Foundation was established in 2002.

“It includes a 10-member board and was established for high school graduates from Stone County to further their education in postsecondary schools,” she said. “It’s a private, nonprofit organization that the sole purpose is to give area youth an opportunity to further their education and to help community improvement through education. It gives approximately 25 scholarships each year totaling approximately $12,500.

“The board rotates, and right now I am not serving on it but enjoy helping with fundraising. I have served as president twice. We have a fundraiser each year, and other funds come from donations. Scholarships are based on academics, school involvement and financial need.”

In addition to her work in education, Hinkle also serves on the Committee of One Hundred for the Ozark Folk Center in Mountain View, which is celebrating its 40th year. The committee is composed of one woman from each of Arkansas’ 75 counties, plus 25 at-large members.

“I’ve been a member for a long time,” Hinkle said. “It keeps me busy.

“It gives students in the fourth grade and up [in the Mountain View School District] a chance to learn to play a musical instrument. The program has been so successful, and some of the students have gone on to have musical careers. The students play concerts around the state.”

Hinkle said the Music Roots Program, which aims to preserve Ozark mountain music, will sponsor a family bluegrass concert at 7:30 p.m. Saturday in the James H. Clark Auditorium at Conway High School, 2300 Prince St. Tickets will be sold at the door for $10. Doors will open at 7.

A similar program will be presented at 6:30 p.m. May 5 at the Ozark Folk Center.

Hinkle said the Committee of One Hundred will also sponsor a fundraiser April 12 at the Governor’s Mansion in Little Rock. More information on this event will be made available at a later date.

The Hinkles were honored as the Stone County Distinguished Citizens for 2010. Jim serves as chairman of the board for Centennial Bank (formerly the Bank of Mountain View) and is a member of the Home Banc Shares Inc. holding company’s board of directors in Conway.

“Jim and I both like to give back to the community,” Kay said. “My parents and Jim’s parents told us to always remember to give back. We really try to do that.”

The Hinkles have two daughters. Lea Ann Finn, 41, and her husband, Al, live in Mountain View, and Lea Ann is mother to Hannah, 11, and Maddie, 5, and stepmother to David Finn, 14. Katie Henry, 32, and her husband, Shane, live in Conway with their son, Cooper, 3. They are expecting a daughter, whom the couple have named Anna Kate.

The Hinkles are active members of Flatwoods Baptist Church.

“Jim is on the financial committee, and I have been on several committees,” Kay said.

Kay and Jim enjoy traveling, although they have had to curtail their trips this past year because of Jim’s health problems.

“We both love the mountains of Colorado and taking our family to Florida in the summer,” she said. “We also have a place in Branson (Mo.). Our bucket list includes seeing Hawaii soon.”