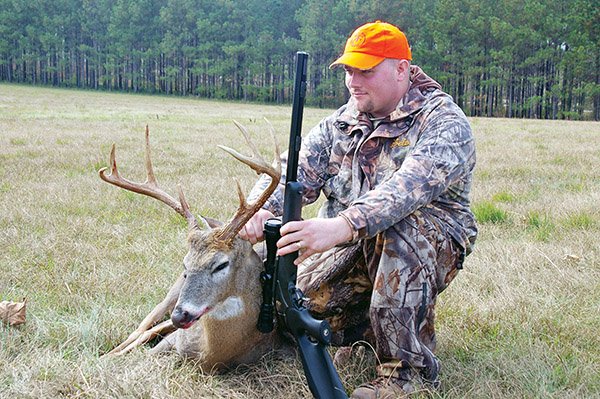 The pursuit of deer is the most popular hunting sport in Arkansas and the U.S., with almost 11 million participants nationwide and more than 300,000 in The Natural State.

Did you ever wonder who’s hunting what in the U.S. and Arkansas? For example, how many deer hunters are there? How many people hunt doves each year? Are there more squirrel hunters or rabbit hunters? How do the numbers of duck hunters and goose hunters compare?

This information — at least some of it — is available in a document known as the National Survey of Fishing, Hunting and Wildlife-Associated Recreation. The survey is conducted every five years at the request of state fish and wildlife agencies to measure the importance of wildlife-based recreation to the American people. The latest survey, conducted in 2011, represents the 12th in a series that began in 1955. Developed in collaboration with the states, the Association of Fish and Wildlife Agencies and national conservation organizations, the survey has become one of the most important sources of information on fish and wildlife-related recreation in the United States.

Additional information on hunters who pursue various migratory bird species is also available. Remember that HIP permit you were required to have last season? HIP stands for Harvest Information Program, and information obtained from hunters enrolled in HIP is used by the Division of Migratory Bird Management to prepare annual reports on migratory bird hunting activity and harvests that tell us the number of people who hunted everything from ducks to gallinules.

By delving deeply into the information in the two reports mentioned above, we can determine the numbers of hunters who pursued each type of game in the U.S. in 2011. Keep in mind that because many hunters participated in more than one type of hunting, the sum of all the hunters exceeds the total of 13.7 million hunters given above.

It probably will come as no surprise that deer hunting is most popular with U.S. hunters, with 10.9 million participants. But it may surprise you a little to learn that turkey hunting and squirrel hunting are in the No. 2 and No. 3 spots with 3.1 million and 1.7 million participants, respectively.

Duck hunting, with 1.4 million participants, doesn’t show up in the list until the No. 6 spot. Both rabbit/hare hunting and pheasant hunting are more popular, each with 1.5 million participants. Dove hunting is in the No. 7 spot. Approximately 1.3 million people pursue these speedy little gamebirds each year.

The number of hunters pursuing each of the other game animals for which figures are available is less than 1 million. The elk, another big-game animal, is in the No. 8 spot with 867,000 hunters. And despite declining numbers of their favorite gamebird, quail hunters are holding on at a respectable 841,000. Grouse/prairie chicken hunting and goose hunting are far behind, with 812,000 and 781,000 participants respectively. U.S. bear hunters number 526,000.

The remaining species for which participation figures are available are woodcock, 114,000 hunters; moose, 106,000; coot, 46,000; snipe, 33,000; ptarmigan, 32,000; sandhill crane, 8,400; rail, 3,300; and gallinule, 2,200. Some of these species — ptarmigan, rail and gallinule, for example — have limited ranges and are popular targets only in small areas. Some, such as moose and sandhill cranes, can only be hunted in certain states with strict harvest limits, facts that keep participation figures low. Woodcock hunting remains popular with many, but woodcocks have become increasingly rare in many areas because of habitat loss. The common coot is widely available to hunters with generous bag limits, but only a few hunters target the bird.

There are no specific figures for some species. The Other Big Game Hunters category, which includes those hunting pronghorns and other big game besides deer, elk, bears, moose and wild turkeys, included 305,000 hunters. People hunting other animals, such as foxes, raccoons, groundhogs and alligators, totaled 2.2 million. It would be interesting to know specifically how many antelope hunters there are, how many alligator hunters, how many coon hunters and so forth, but for now, those figures are unavailable.

The survey shows that Arkansas hunters age 16 and older numbered 363,000, including nonresidents. Resident hunters numbered 316,000, or 87 percent of that total. In addition, there were 62,000 Arkansans 6 to 15 years old who hunted, not surprising in a state where hunting has such a rich tradition.

Unfortunately, the survey provides few details about the number of hunters pursuing each type of game animal in Arkansas. Deer hunting ranks No. 1 with 308,000 participants. Turkey hunting comes in second, with 112,000 hunters. Duck hunters number approximately 87,000, and squirrel hunters number 75,000.

According to the U.S. Fish and Wildlife Service, “The sample size was too small to reliably report figures for other species.” So we can only guess at the number of hunters pursuing rabbits, quail, bears and other species.

The bottom line is this. Millions of Americans — hundreds of thousands of Arkansans — continue to enjoy hunting for a wide variety of species, and their activities have a major positive impact on the U.S. economy. License sales and excise taxes on sporting-goods purchases fund conservation projects in every state, protecting our natural environment and our fish and wildlife. All of us should be thankful that the great tradition of hunting continues to remain important for residents in Arkansas and throughout the country. Without it, much that we hold dear might be lost.