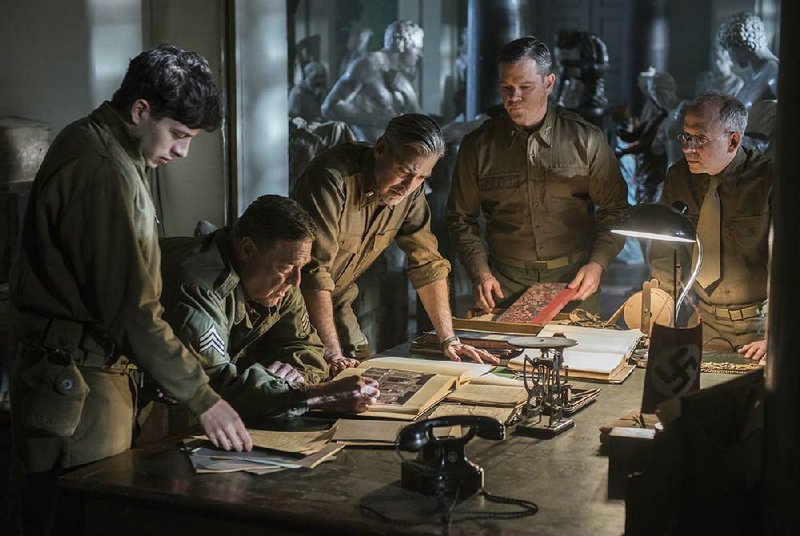 The real-life mission described in The Monuments Men is so fascinating that it’s easy to forgive the movie for some jarring shifts in tone and a sense that there’s a greater tale yet to be told.

As World War II was coming to an end, the Nazis had plundered the rest of Europe of much of its treasured works of art. Whatever Hitler didn’t hoard, he burned. Apparently, Picasso’s paintings faced the same wrath as other enemies of the Third Reich.

Realizing that preserving cultural treasures is just as important as saving the freedom to enjoy them, an art professor named Frank Stokes (George Clooney) convinces Washington to start a special undertaking to ensure that Germans don’t destroy what was left of Europe’s treasures during Hitler’s scorched earth retreats.

In most times, Stokes would have merely been an advocate for the cause of cultural preservation, but because all of the young men who know art history were already on the battlefield, the middle-aged professor winds up leading a crew of similarly mature experts in the campaign. In this case, the culture war is during an actual armed conflict, so Stokes and his squad, called “The Monuments Men,” face live fire.

The crew actually accompanies troops during the liberation of France, but often have to battle American and British superiors who don’t understand why preserving paintings and statues is worth risking lives.

Clooney, who also directed and co-wrote the script with his usual partner in crime Grant Heslov (Good Night and Good Luck) has assembled a cast certainly worthy of portraying the heroism of the real Monuments Men. Watching fellows who are clearly too long in tooth to be wearing combat uniforms is amusing and occasionally poignant, because these fellows went a lot further to ensure that we could appreciate work that the Nazis either pilfered or marked for destruction.

It’s a given that Murray and Balaban would be a riot together, and their interactions are a highlight of the film. Campbell and Savitz can’t stand each other, but they grudgingly overlook their animosity for what they believe in.

Clooney nails the look and feel of previous World War II movies like The Dirty Dozen, but he has some difficulty maintaining the right tone and approach. Every now and then we hear characters (or Clooney’s voiceover) reminding us of the importance of these fellows’ mission.

Being able to see a Michelangelo sculpture of the Madonna in a cathedral in the city of Bruges where it belongs instead of in a German salt mine or worse, is self-evidently good. We really don’t need a bunch of monologues to remind us. Then again, most of us don’t have great voices like Clooney.