Sessions familiarize them with facets of new state law by Emily Walkenhorst | February 16, 2014 at 4:24 a.m. 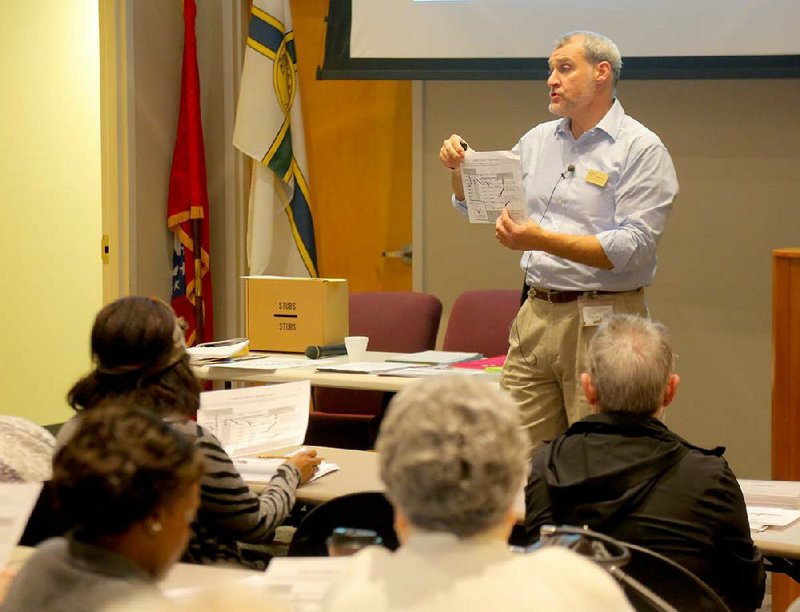 Shawn Camp, assistant director of elections for the Pulaski County Election Commission, discusses how to fill out a voter-assistance form during a poll-worker training session Saturday in Little Rock.

Correction: A voter identification card issued by a county clerk’s office that does not include a photo of the card holder is not an acceptable form of identification to cast a ballot under the state’s new voter ID law. The voter ID card's photo requirement was omitted from this article.

The first poll-worker training session of the Pulaski County Election Commission on Saturday included teaching the rules and regulations of Act 595 - the new law passed by the state Legislature last year that requires proof of identification before voters can cast their ballots.

Veteran poll workers said Saturday that they were accustomed to giving voters the option of providing identification so the new regulations would not be difficult to learn.

However, Marion Scott, 64, who has been a poll worker for several years, said she is concerned there will be several voters who will need provisional ballots in Pulaski County because they cannot produce proper identification at the polls.

A provisional ballot gives voters until Monday after the election to present an ID to the commission to have their votes counted.

“If you’re an old person who doesn’t have a driver’s license, you’re not about to whip out your passport because you’re on your way to Europe,” Scott said.

Under the new rules, only IDs issued by the federal government, state government or any Arkansas post secondary education institution can be presented.

The expiration date on the identification must be within the past four years. Private-company or local-government employee IDs will not be accepted.

Those living in a residential-care facility such as a nursing home do not have to show proof of identity. They do, however, have to provide a statement from the facility administrator certifying they are a resident.

Voters who are indigent or have religious objections to being photographed must provide a sworn affidavit from the county clerk’s office.

In lieu of a photo ID, absentee voters can submit a utility bill, bank statement, government check, payroll stub or any other government document that shows the name and address of the voter. However, if absentee voters do not mail the valid identifying documents with the ballots, their vote will not be counted, according to an Arkansas attorney general opinion released Monday.

Rosalie Osborne, 75, who has been a poll worker for more than 10 years, said the new law will be an adjustment, but she is confident that she will learn the requirements.

Henry Stefans, 65, who will be a precinct chief judge, said he does not foresee many problems with the new rules at a March 11 special election for Pulaski Technical College, but he is concerned about the May primaries because the volume of voters will be larger.

On Saturday, a volunteer asked whether the county would conduct a voter educational campaign before the election. Election Commission Director Bryan Poe said the secretary of state’s office has an ongoing promotion about the new procedures and rules, but the county is not conducting any voter education.

“We’ll have to rely on the media and the candidates,” Poe said.

Poe said the commission is training about 650 poll workers for the special election. There will be two more Saturday training sessions before the election. Poll workers need to attend only one of the nearly two-hour sessions offered at various times.

Poll workers are paid $25 for attending the training and $75 to $105 per election day worked, depending on the type of election and the particular duties performed.

On March 11, Pulaski Technical College is seeking a 1.9-mill increase to fund facility operations and capital projects. If approved, the millage increase would add $38 to the annual property-tax bill of a home valued at $100,000. Revenue expected to reach about $11.4 million would be collected beginning in 2015.

More information on how to vote and the new law can be found on the commission’s website, votepulaski.net and by searching for Act 595 on the Arkansas Legislature’s website at, www.arkleg.state.ar.us/assembly/2013/2013R/Pages/Home.aspx .