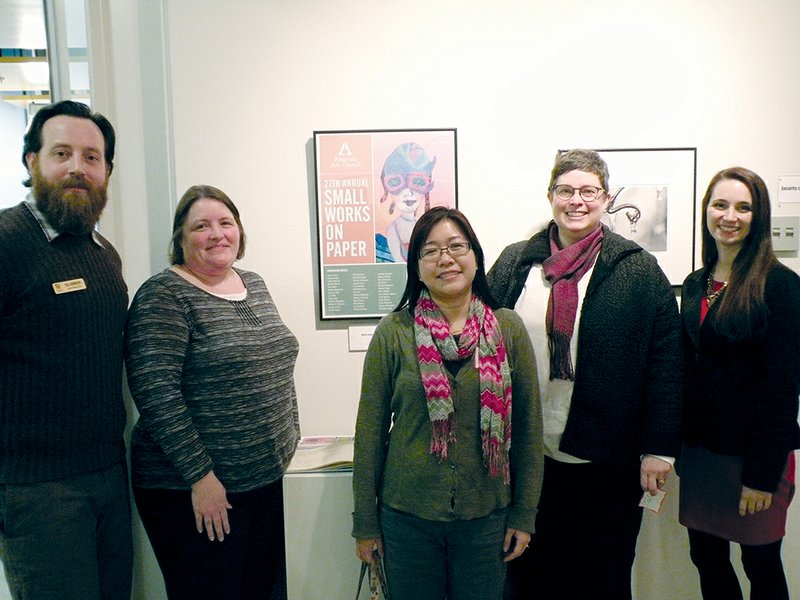 RUSSELLVILLE — The 27th annual Small Works on Paper exhibition is now on display in the Norman Hall Art Gallery at Arkansas Tech University in Russellville. The exhibit features works by several artists with ties to the River Valley & Ozark Edition coverage area.

The exhibit, which will remain on display through Feb. 25, is open to the public, and there is no admission charge. Gallery hours are 8:30 a.m. to noon and 1-4:30 p.m. Monday through Friday.

Conway artist Cathy Wester received a Purchase Award for her oil and pastel painting CDW-6503. This is the first time she has entered this juried exhibition.

“It’s just phenomenal,” she said, when asked how she felt about receiving the award. “I’m basically a self-taught painter. I’m coming out of five years of major depression and love to express myself with bright colors.

“This painting is an oil and pastel based on a series of photographs I took of reflections on windows. Some people thought I was trying to photograph what was inside the windows, but I was actually photographing the outside of them.”

Wester said she took two years of drawing in college, “but I never took painting. I got books from the library and learned about color and painting.” She holds a Bachelor of Fine Arts with a major in art from the University of South Dakota at Vermillion.

“I started playing around with photography about 40 years ago,” she said. “I did photos for school papers and yearbooks. I studied fine-art photography for five years and then had my own portrait and wedding photography business for 10 years. Photography has always been with me, though. However, drawing has been with me from an earlier age.”

The following area artists also have works in the Small Works on Paper exhibit.

Neal Harrington is director of the Norman Hall Art Gallery and an associate professor of art at Arkansas Tech.

“I am always thrilled to be accepted in any show,” Harrington said. “It doesn’t always happen.

“I have two works included in this Small Works on Paper exhibit. Both works are intaglio prints. These are individually inked and hand-pulled originals with very small editions. I printed five or less of each.

“The first is called Pandora, and the image plays loosely with the Greek/Roman myth, Pandora’s Box. The second is called Temptation, and it features a vulture with human hands looking very sinister, as temptations can be. I am very influenced by American roots music, and I like to depict artwork that is the visual embodiment of the type of feeling that this music provokes in me.”

He and his wife, Tammy, moved to Russellville in 2001 when he accepted a position at Arkansas Tech. Tammy is also an artist and has a painting in this year’s exhibit.

Tammy Harrington is an associate professor of art at the University of the Ozarks in Clarksville, where she teaches two-dimensional art. Her work has been chosen for the Small Works on Paper exhibit several times in the past.

“I’m always excited to be accepted into the Small Works on Paper show,” she said. “I enter every year.”

This year’s piece, a monotype print, is called Dream I. It features a koi fish.

“The koi fish is a symbol used in Chinese culture, usually for success and wealth,” said Tammy, whose parents immigrated to the United States from China. “But I used the koi fish because of its fluid shape.

“I did two of these monotypes, one in color and one in black and white. I used the monotype to create a sense of being under water. By adding several layers, it’s similar to watercolor. It creates a sense of haziness, almost like a dream state.

“I put ink on it and take a Q-tip and wipe off areas. I did this one in red and orange, but I thought something was missing. So I added the blue. I like experimenting with the same image.”

Benjamin Krain has been a staff photographer for the Arkansas Democrat-Gazette for 17 years. His works have been selected for the Small Works on Paper exhibit several times in the past.

“I’ve had good luck with this competition,” he said. “It’s always been good to me.”

“It was a real dog wedding,” Krain said. “The dogs’ parents (owners) had outfits for them, read vows and had the yard decorated. The dogs even walked down the aisle.

“They held the dogs close to each other at the front of the aisle, and when it came time for them to kiss, that’s when this happened.”

Krain photographed the event on a Sunday afternoon when “I had no assignments for the paper,” he said. “I took several frames and one did run in the paper, but not the one I submitted to the competition.”

Krain grew up in Little Rock but now lives in Maumelle. He graduated from the University of Arkansas at Little Rock with a degree in journalism in 1995. After graduation, he served an internship at the Arkansas Democrat-Gazette and stayed, becoming a full-time photographer in 1997.

Brittany Madalone graduated from the University of Central Arkansas in December 2013 with a Bachelor of Fine Arts with an emphasis in printmaking and a Bachelor of Arts in art education. She lives in Conway and is a substitute teacher for the Conway and Little Rock school districts.

Madalone’s work in the Small Works on Paper exhibit is titled Emperor Moth.

“It is a woodcut print on paper that is hand-colored with India ink,” she said. “It was part of my BFA senior show in the spring of 2013.

“I love depicting nature in my work, which is rooted in the fact that I have lived in or near rural areas for most of my life, and I have grown to value the beauty of the inhuman world. As an artist, I am drawn to not only observe, but also to interact with and manipulate my environment.

“For my senior exhibition, I created my own insect species and fashioned their habitats in a series of woodcuts that use the information I discovered through entomological research as the building blocks of imaginary life forms and ecosystems.”

This is the second time Madalone has had her work accepted into the Small Works on Paper exhibit.

“My work Disasters of War was accepted in 2013, and I feel very honored and blessed to be a part of the 2014 show,” she said. “I will continue to submit work to Small Works on Paper for as long as I am a resident of Arkansas.”

Madalone is the daughter of James and Lisa Madalone of Greenbrier.

Robbins is in prison serving a life sentence without parole for a murder he committed in Jonesboro in 1997 at the age of 18.

“I’m trying to get his name out there as an artist,” Moore said. “He’s a human; a lot of people don’t see that. He’s got talent just like everybody else.

“I met him in 2009 at the prison and took an interest in his art. I am his ambassador. He’s just an artist, not a prison artist. Prison is where he is, not who he is.”

Robbins titled his piece in the exhibit Art by Any Means. Moore attended the reception at Arkansas Tech and read this statement from Robbins:

“The invisible hand that has guided my art for the past 16 years has been scarcity. Everything I do has come through the lens of limitations. A lack of supplies, a lack of references, a dearth of instruction. Each piece uses a limited palette, a minimum of brushes and one or two references. But this is just the framework of inspiration. Art is what happens in between.

“In my career, I’ve been reduced to using brushes made from my own hair, painting with coffee and even my own blood, using cheap pens and borrowed pencils. The constant is that the artist finds a way. It is a luxury to have the finest supplies, to be able to do it exactly the way you want. Life rarely allows for such. We all make do with what we have. And when art is your calling, you can make it happen with whatever is on hand.

“For Small Works on Paper, I took this concept to its most extreme conclusion. I imagined myself locked in a cell, void of all supplies, all outside inspiration or reference. In such a situation, how would art express itself? My conclusion is the piece, Art by Any Means. The artist, ragged and destitute, devoid of everything but himself, still finds a means and a medium. Using his own blood, he paints a self-portrait on the cell wall — expressing himself, with himself, because art will not be denied.”

Trusty’s painting in the show, On a Leash, is part of her Loud White Space painting series. This marks the third time her work has been accepted for the Small Works on Paper exhibit, and each of the three works came from this series.

“For my paintings, I take a magazine image and white out everything except for the figures,” she said. “Then I recreate a new environment around them. I knew I could draw anything, so I decided to make it as absurd as I could, and added a dinosaur.

Dinosaurs are awesome. So I did a profile of a T-Rex on a leash.”

Trusty is a 2002 graduate of Russellville High School and a 2006 graduate of the University of Central Arkansas in Conway with a Bachelor of Arts in art education. She received a Master of Fine Arts from the Art Institute of Boston in 2011.

The Small Works on Paper exhibit will move to the Mullins Library at the University of Arkansas at Fayetteville on March 2, where it will remain on display through March 30.