Trainer offers app to give fans a hand 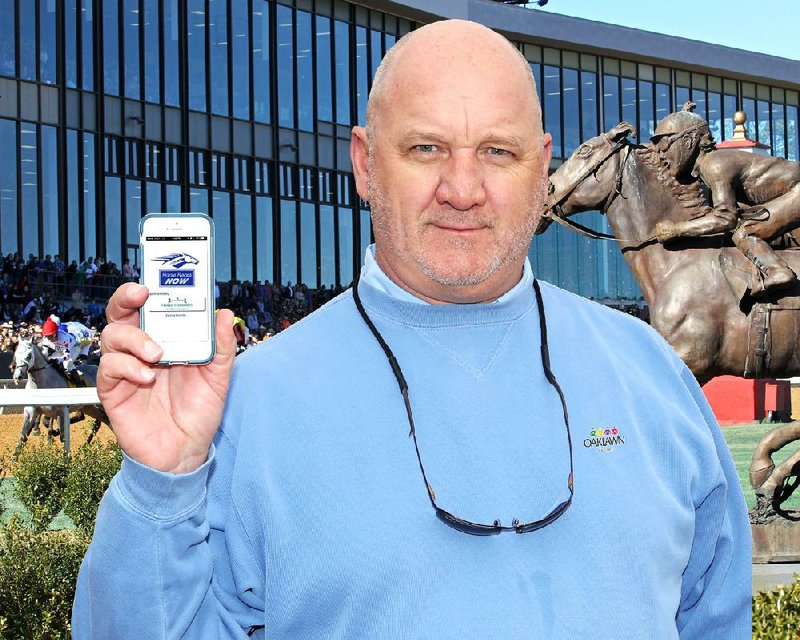 HOT SPRINGS - Kenny McPeek literally has the racing world in the palm of his hand.

McPeek, who was born in Fort Chaffee and is now a successful trainer, is the inventor and co-founder of Horse Races Now, which is billed as “The Coolest Horse Racing App Ever!”

“It’s like having a program in your pocket for every racetrack everywhere for the rest of your life,” McPeek said.

The free app is available on iPhone, iPad and Android platforms and can be downloaded through the App Store, Google play or by texting “HORSE” to 84700.

The app includes links to entries, results and live and replay video from tracks across the country, a link to national advance deposit wagering sites and delivers push notifications.

Fans can tailor information to meet specific needs, such as a favorite horse, trainer, jockey or track.

The goal, McPeek said, is to expand racing’s fan base.

McPeek, 51, said his idea of a horse racing app was hatched about four years ago while watching CNBC’s Planet of the Apps, a one-hour program that explored the explosion of mobile technology, specifically through phone applications.

“At the time, I only had like a little flip phone,” McPeek said. “During the show, I Googled ‘horse racing apps’ and there weren’t any. I kind of politicked around and checked with some people to see if this was something that was happening. Long and short, I ended up doing it on my own because I just felt like it needed to be done.”

McPeek said he didn’t invent the app to make money but said he’s invested more than $500,000 into the project.

Capital to get Horse Races Now off the ground is offset by McPeek’s stable averaging about $4 million in purse earnings the past six years. The site also lists more than 30 advertisers, many connected to the lucrative Kentucky breeding industry.

McPeek has saddled 1,349 winners in his 20-year career, and his horses have earned more than $60 million in purses.

One of McPeek’s major clients is Arkansas lumberman John Ed Anthony, meaning the trainer splits his stable in the winter between Oaklawn Park in Hot Springs and Gulfstream Park near Miami.

Live and replay video from Oaklawn, however, isn’t available on Horse Races Now because McPeek doesn’t have an agreement with Churchill Downs Inc. CDI negotiates content agreements on behalf of Oaklawn.

“I’m very impressed with his app; I’m impressed with Ken McPeek,” Oaklawn General Manager Eric Jackson said. “But the decision is Churchill’s, not ours. If he can get the green light from Churchill, we’d be good to go.”

Print Headline: Trainer offers app to give fans a hand