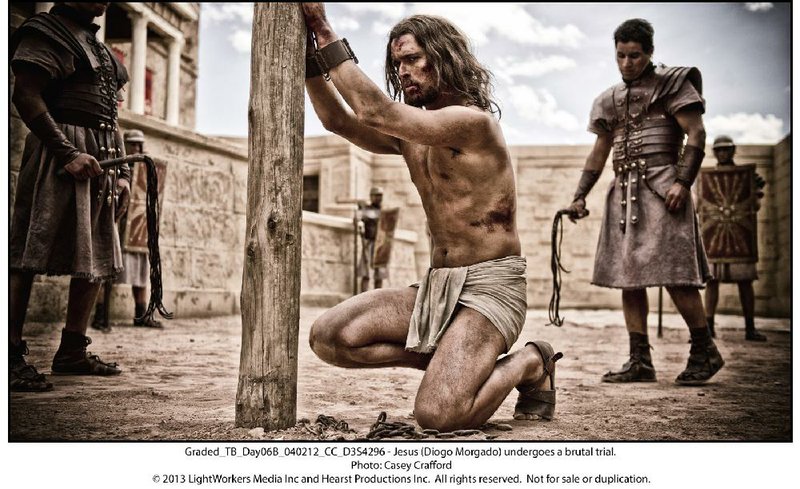 It is perhaps fitting that in this season of lax remakes and lazy re-imaginings from Hollywood studios, we have perhaps the granddaddy of them all: The story of a humble Jewish carpenter who went on to become a messiah. Or at least that’s how the liner notes of this partisan Light workers production have it. Mega producer Mark Burnett has again teamed up with his wife, Roma Downey (the belle of the Saved by an Angel series and a host of TV movies) to bring us something designed to be enlightening and uplifting. Alas, it is neither.

Let’s begin with Jesus, here played by Portuguese actor Diogo Morgado. Long-haired and suitably hirsute, he appears one day to Peter (Darwin Shaw) at his fishing boat, and performs a quick miracle with the fish of the sea of Galilee. Now a believer, Peter quickly joins with Jesus and they form the rest of their dynamic team, including Thomas (Matthew Gravelle), Mary Magdalene (Amber Rose Revah) and, naturally, Judas (Joe Wredden). Before too long, the group is sauntering around town, performing miracles,making converts and building up a following before heading over to Jerusalem, where the anxious Jewish elders, lead by head priest Caiaphas (Adrian Schiller), nervously negotiate the terms of Rome’s occupancy with head prefect Pontius Pilate (Greg Hicks), an unctuous man unaccustomed to not getting his way. Thus ensues a sort of Jesus’ greatest hits spectacle - a loaves and fishes here; a “let he who is without sin cast the first stone” there - until it finally is decreed that he be tortured and put to death by the fearful Jews and stone-hearted Romans.

As far as Jesus goes, Morgado certainly looks the part, quick with a beatific smile, and a kind nod. Only his eyebrows, long, beseeching things perhaps a bit too quick to furrow, that often give him the expression of genial bafflement, suggest something other than kindhearted godliness. Time and money has been put into the production, but it somehow never rises much above a Lifetime channel flick (possible title: I Am The Light: The Jesus Story). The script, credited to Richard Bedser and director Christopher Spencer, among others, hews so closely to the standard dogma that there’s absolutely no room for insight or interpretation.

All of which is to be entirely expected, given that much of this material - a vast majority of its 138-minute running time - has been culled from footage taken from Downey and Burnett’s hugely successful History Channel miniseries, The Bible (minus the controversial Satan-as-Obama-lookalike material). As such, it’s difficult to take it on its own merits, such as they are. It’s a slightly repackaged bit of Christian history designed to either entice the good and God-fearing to experience the story of Jesus all over again, or to pay full ticket price for something many already saw for their cable fees the previous year.

One might take exception to either Martin Scorsese’s The Last Temptation of Christ or Mel Gibson’s Passion of the Christ, but they at least take some sort of interpretive stand on this story - Scorsese, to suggest Jesus’ suffering and guilt before taking his responsibility as the Holy Son was similar to the rest of us; Gibson, to show Christ’s suffering in such bloody, torturous form as to … well, feel something visceral, anyway.This film never attempts to do anything but perform the basic story in as nonchallenging a way as possible. Reportedly, Downey and Burnett worked hard with various religious groups of different faiths to produce a version of the biblical story that would not be offensive to anyone (save, apparently, the White House),which is commendable given the incendiary nature of our religious disagreements, but as a result, the film is drained of flavor, like a re-heated entree from the bottom of your freezer.

The unduly cynical might suggest Burnett used a fraction of his vast fortune, Charles Foster Kane-like, to give his actress wife another suitably lofty high-profile gig (there certainly are a good deal of close-ups of the weeping Mary, staring at Jesus through prison bars and trembling her chin impressively), but it could also just be the power couple’s way of spreading the gospel to as large an audience as possible. Whichever the case, they would have to summon up something a good deal more vibrant and engaging than this to win over more than a handful of new converts. Jesus wept, but after seeing this bland examination of his life he might also have winced.