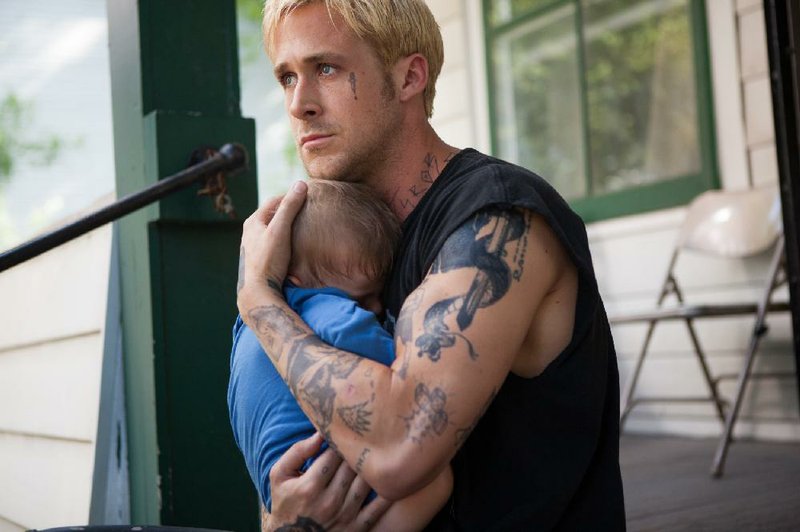 Ryan Gosling plays an enigmatic motorcycle stunt rider in The Place Beyond the Pines.

It’s become a New Year’s tradition: I show you my Top 10 list (see last Sunday’s Style section)and then you show me yours while we’re waiting for the flickers to start up again in earnest next week. (Early word - no betting please - is that Inside Llewyn Davis, August: Osage County and Lone Survivor will all open next week in Little Rock and Northwest Arkansas. But early word has been wrong before.)

So we present the first of (probably) two columns dedicated to alternative lists of the best of 2013. In an effort to embarrass stragglers, these are presented in roughly the order in which they arrived. Enjoy.

Here are my Top 10 in no particular order:

American Hustle had the best original screenplay for 2013. Love those hairdos!

Blue Jasmine was an excellent re-telling of A Streetcar Named Desire. Way to go, Woody!

The Hunt was the best foreign film I saw, or have seen, in many years. Devastating.

The Book Thief was a different slice of WWII history and Geoffrey Rush was delightful.

The Spectacular Now showed the shattering effects of alcoholism on a family.

This Is the End was gross, violent and funny as hell. Gimme a blue light, somebody!

I’m not a fan of sequels (the Godfather films notwithstanding) but Despicable Me 2 was a hoot. Long live the minions.

Pacific Rim was big and noisy with its tongue planted firmly in its cheek.

RED 2 was sublime nonsense with top-notch actors having a ball.

My list would have been different had I seen more films and anything after American Hustle.

1 . 12 Years a Slave - Like last year’s Lincoln, it’s unmissable; Chiwetel Ejiofor is mesmerizing as a free man sold into slavery.

2 . American Hustle - Disco-era scammers romp in Sopranos-land, and “some of it actually happened.” Jennifer Lawrence is a memorable bimbo.

5 . Philomena - Judi Dench in an understated Oscar-worthy portrayal of an Irish mother on a quest. Gently funny, infuriating, wrenching and true.

6 . Wadja - Delightful and thoughtful Saudi Arabian film. A bright 10-year-old longs for a bike; problem is, she’s a girl.

7 . August: Osage County - A Midwestern Long Day’s Journey Into Night. The director has leached much of the humor from the play, but Streep is monstrously good.

8 . Inside Llewyn Davis - If newcomer Oscar Isaac has more than one deadpan expression, a star may be born in this vignette of early ’60s folk musicians.

10 . Her - A soulful Joaquin Phoenix fails at human interaction, falls for the husky voice of his ‘‘personal operating system.’’ Careful what you wish for.

11 . The Way Way Back - Netflix this poignant, funny coming of age story, a summer highlight. Toni Collette is especially fine as the single mother of a 14-year-old boy.

12a. Gravity - Dazzling CGI visuals get an A; the ludicrous script (Sandra Bullock piloting space capsules using Russian and Chinese manuals), a D.

12b. Saving Mr. Banks - Emma Thompson as rude and bitter P.L. Travers battles Disney (Tom Hanks) over the rights to her Mary Poppins.

BLAKE RUTHERFORD: Vice president of The McLarty Companies and founder of Movies in the Park

I wish I’d seen: Her

My top 10 movies (in no particular order):

Her - What could be better than sweet, romantic and creepy? Joaquin Phoenix is perfectly cast.

Inside Llewyn Davis - The Coen brothers’ latest music-based tale is made even better with a brief, brilliant appearance by Adam Driver.

Mud - It’s too long and it should have ended about three scenes earlier, but it’s still terrific thanks to Matthew McConaughey and the Arkansas setting.

Short Term 12 - Realistic movies about 20-somethings don’t have to be miserable.

The Hunt - Only the Danes could come up with a drama that would make Mads Mikkelsen a victim. Spoiler alert: There’s a dog in the story, and you know what happens to dogs in dramas.

The Inevitable Defeat of Mister & Pete - Hey, not everybody in New York lives on the Upper West Side and drinks $20 cocktails. Here’s proof.

The Wind Rises - Hayao Miyazaki says this is his last film. What a loss to the animation community.

Nebraska - Fans of Bruce Dern from way back (all those 1960s Westerns) will love him as Woody Grant, a curmudgeonly old coot who won’t take no for an answer. June Squibb holds her own as you can’t-bully-me Mrs. Grant.

The Spectacular Now - Beautifully written and performed, this film explains a lot about the attitudes of Generation Z.

American Hustle - This fascinating super-caper starts out well, then gets even better when Jennifer Lawrence shows up.

And while he hasn’t seen Spike Jonze’s Her yet: “I can guarantee it’ll be my favorite of the year.”

It’s an encouraging sign that I had trouble pruning down a list of 10 worthy movies for this year. Each year provides me with plenty of junk to condemn, but this batch was especially hard to hate.

JONATHAN NETTLES: Film critic for KTHV-TV, Channel 11, three-time household champion of such games as checkers, Connect 4, and Monopoly. He also does an incredible impression of Arnold Schwarzenegger.

August: Osage County - Meryl Streep is amazing as the pill-popping, truth-telling matriarch of the very dysfunctional Weston family. I connected with Osage County on a personal level - there’s a certain degree of dysfunction in my family.

Gravity - The ground breaker of 2013. I have never been on the edge of my seat like this in a movie theater. Director Alfonso Cuaron not only delivered a tight, tense film but he was also innovative in the way he brought it to the screen. Cuaron spent years working with visual-effect artists trying to perfect the look of this film and waiting for the technology to come along so this film would be possible. If you did not see this in the theater, you missed half of the experience of this film.

American Hustle - Competing for my favorite film of the year, David O. Russell gives us a funny yet serious look at a con gone wrong. Amy Adams and Christian Bale are con artists who get in over their head. Bradley Cooper is an FBI agent who gets in over his head. Jennifer Lawrence seems to be the only one who knows what she’s doing but has no clue what’s going on. It’s just a great movie.

Captain Phillips - Is there anything that Tom Hanks cannot pull off? This movie is intense from the moment the Somali pirates board the Maersk Alabama. The surprise performance of the year comes from Barkhad Abdi as leader of the pirates.

12 Years a Slave - Chewitel Ejiofor is captivating as Solomon Northup, a free man who was kidnapped from his life in the north. Director Steve McQueen took a subject that has been studied in history and made it real and gave it a deeper emotional connection to a modern audience.

The Way Way Back - A coming-of-age story about a 14-year-old boy who is trying to figure out where he fits in between his recently divorced mom and her new found love interest. During a summer trip, he befriends the owner of a local water park who helps him discover that life isn’t as serious as he thinks.

This Is the End - Seth Rogen, James Franco, Jonah Hill, Jay Baruchel, Danny McBride and Craig Robinson. Funniest, raunchiest, lewdest, most curse-word-sayingest group of guys on the planet in 2013? Yes.

Rush - Ron Howard is the man. Thor was great as a race car driver but Daniel Bruhl was spectacular as F1 racer Niki Lauda. The technical look of this film and the racing sequences blew me away.

The Wolf of Wall Street - Classic Scorsese and another great performance by Leonardo DiCaprio. Although it made my list, the first thing I tell people about this movie is that it is three hours long.

Nebraska - Bruce Dern is a legend (even as a crazed neighbor in the Tom Hanks comedy The ’Burbs) who delivers a stellar performance in this film that deals with aging parents, father-son relationships, family, and what we go through to make them happy.

Top 13 of ’13: The Spectacular Now - A truly wonderful film that starts out as a sweet, tender high-school story with appealing leads, and then it gets better and better as it continues with a great resolution in the final half. It’s a very touching, sometimes hurtful payoff that brings things into perspective for these kids. This mixture of sweetness and harsh reality, with a terrific script and two richly developed characters, is what made this film my personal favorite of 2013.

Gravity - The main goal was to put the viewer in space with Sandra Bullock and George Clooney; mission accomplished. I saw this film twice on Cinemark XD screens; it got me both times.

Before Midnight - Will there be another Before film after the heated argument between Jesse and Celine at the end of this film? Guess we’ll find out in nine years.

Saving Mr. Banks - One of the best films I’ve seen about the collaborative process in Hollywood filmmaking; walking out of the theater, I even found myself humming “Let’s Go Fly a Kite.”

Fruitvale Station - Definitely one of the strongest films I’ve seen in quite some time, based on a true tragic story that happened in Oakland, Calif., on New Year’s2009. Great performance by Michael B. Jordan.

Short Term 12 - What could have been a sappy, overly sentimental melodrama turned out to be a well-written, deeply effective film that features complicated people trying to move from their pasts. Additionally, it might be a deserving career breakthrough for actress Brie Larson.

All Is Lost - Haunting film with moments I won’t forget easily, as well as an excellent performance by Robert Redford.

This Is the End - Seth Rogen, James Franco, Danny McBride, Jonah Hill, Craig Robinson and Jay Baruchel playing themselves as they survive (gulp!) the Apocalypse? I’m all for it!

The World’s End - The third entry in Edgar Wright and Simon Pegg’s “Blood and Ice Cream” trilogy is not only very funny but also surprisingly insightful in presenting its lead character - I’d even say it’s arguably Pegg’s best work as an actor too.

We’ll have more in a week or so. And on blood, dirt & angels.