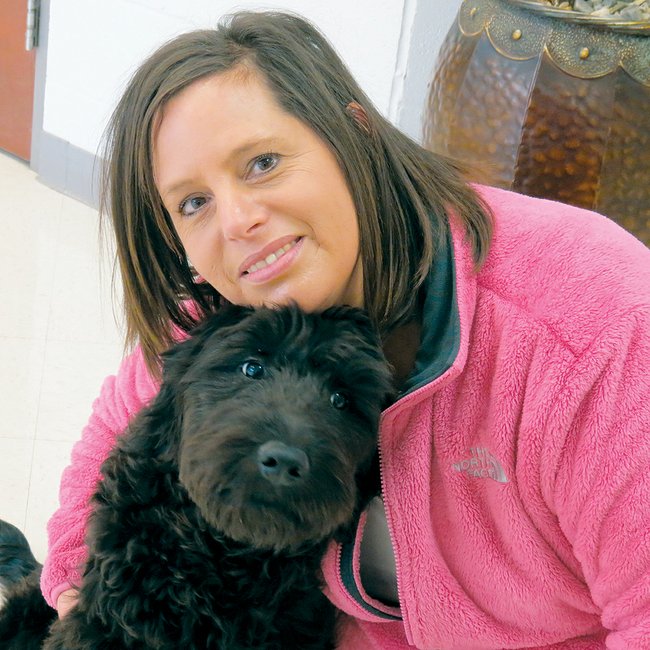 Vilonia Middle School administrative assistant Sarah Penter, who is the handler for therapy dog Bella, said the two are getting A’s on their report cards for learning their commands.

VILONIA — One student at Vilonia Middle School stands out as the teacher’s pet.

Her name is Bella, and she is a 6-month-old black goldendoodle, a cross between a golden retriever and a standard poodle.

Bella spends five days a week in the alternative-learning-environment classroom under the watchful eyes of teacher Joseph Brewer and aide Jordan Bullock.

The pooch belongs to the school district, but she spends her nights, weekends and school breaks with Sarah Penter, an administrative assistant at the school. Penter, who serves as Bella’s handler, has worked at the school for about five years. She seldom misses a day, and neither has Bella since she joined the staff just before Thanksgiving.

At 6 weeks old, Bella weighed about 20 pounds when she walked through the door to assume her position. Since then, she has gained about 15 pounds and a lifetime of friends.

Bella’s assignments include mingling with the kids, helping them read and providing general companionship. Bella’s presence, Brewer said, helps to dial down the level of stress and anxiety in the classroom.

The six or so boys in the room, during a recent visit, appeared to have rules regarding movement, but Bella seemed to be exempt. She strolled from student to student at her leisure, without reprimand. Each boy scratched her ears or petted her head as she stopped at his desk. A doggy bed was visible, but there was no kennel in the room for restraint.

“That’s the way it is supposed to be,” Brewer said. “No student has been sent to the office (for disciplinary action) since [Bella has] been here.”

The students, he said, join Bella on her bed throughout the day to read to her. At lunchtime, she lines up with them, and she is escorted to the office while they go to the cafeteria. The students said they make sure her water dish is full at all times, and when she whimpers, they take her outside for a potty break.

Bella is the only one who gets to eat in class, but the students don’t seem to mind. Each boy has a small pouch of treats, and when Bella obeys a command, she is rewarded. Brewer said it may be unusual for so many people to reinforce Bella’s commands, but she seems to take it in stride.

Brewer said allowing the students to help with a portion of Bella’s training lets them see they are not the only ones who learn differently and that not everyone “fits one mold for learning.”

“She’s just like one of us in class,” student Parker Hall said. “She’s the best thing that has ever happened to this school.”

Bella also visits other classrooms at the school as a reward for students. Her homeroom peers don’t mind Bella’s brief absences, but they are not fond of the longer ones.

By the end of the school year, Bella should know 108 commands, Penter said. She said a professional trainer comes to the school on Thursdays to work with her and Bella, as well as test them on their homework. They are scoring A’s on several commands, including “Let’s go, sit, down, load up and heel.”

“It’s tough, and it is a job,” Penter said, but one that she volunteered to take and one that she loves. “I love animals, and I know the value of having Bella in this school.”

This is the second therapy dog at the school. The first one didn’t belong to the school, and when the owner quit working at the school, so did the dog. The students, Penter said, were down when they came back to school at the beginning of the year and their dog was gone.

“It hurts these boys when their dog is not here,” Penter said. “I plan on being here for a long time — me and Bella.”