Coen Brothers’ latest film follows a recipe that pays off 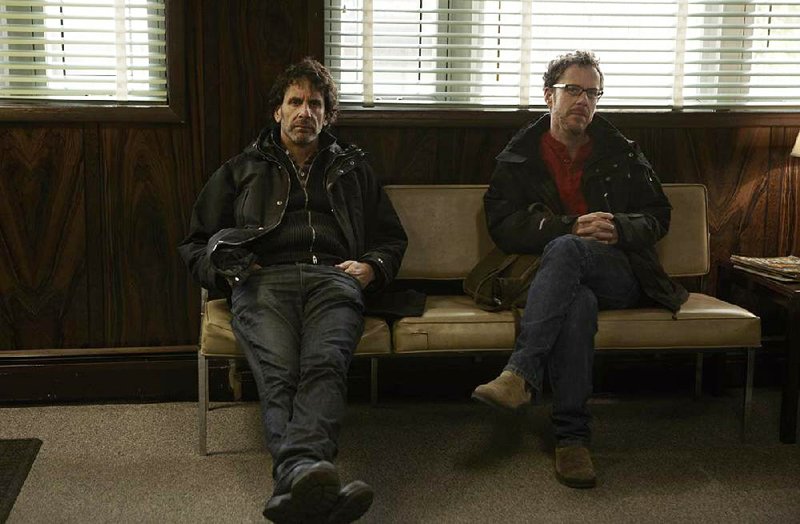 Joel (left) and Ethan Coen have authored a remarkably distinctive catalog of films including Raising Arizona, Fargo, True Grit, Miller’s Crossing and a Serious Man. Are they the best American filmmakers of the past 30 years?

The Brothers Coen, Ethan and Joel, enjoy a rarefied designation among American filmmakers. Indie filmmakers whose movies don’t often enjoy what might be termed phenomenal financial success - although their highest grossing film to date, True Grit, did make a whopping $171 million domestic, a substantial sum even in the days of the billion-dollar behemoths - nevertheless are given almost complete carte blanche by the studios lucky enough to finance them. Why?

Some of this comes down to basic capitalism, of course. While the Coens’ films don’t always make a ton of money, the brothers are so good at making their peculiar concoctions cheaply (aided enormously by many of their accomplished actors agreeing to work for what must be close to scale), their films have rarely lost money, either. It might not be sexy, but making $22 million domestic on a $6 million investment (such as with Raising Arizona) still keeps a studio safely in the black, and in this business sometimes that can be enough.

Beyond the money situation, though, there’s another element at work. As with Woody Allen before them (another American independent who gets to make pretty much whatever he pleases) there’s a certain amount of prestige associated with financing their productions. Even the biggest and most egregiously money-grubbing studios want to feel as if they are contributing something to the cultural iconography, at least once in a while.

It appeals to the enormous egos of these multiplex purveyors to be able to stand proud during awards season and prove that they, too, care about quality. Sadly, in this day and age, that’s about as close as we can get to the sort of support many studios offered in the early part of the ’70s, allowing the idea of an American auteur such as Scorsese, Coppola or Altman to take hold in the first place.

Given this exalted position in the film making ranks, the Coens rarely fail to take advantage of their unique freedom. With precious few exceptions, their films are quirky and challenging, reflecting their unique vision -if not ideology - and they routinely produce some of the most endearingly distinctive films in the American landscape.

Inside Llewyn Davis is no exception. The story of a beaten-down folk singer - based loosely on troubadour Dave Van Ronk - trying to make his way during the particularly harsh winter of 1961 in the West Village, stars the relatively obscure Oscar Isaac as the titular hero. Typical in the Coens’ oeuvre of hapless leading men on an increasingly brutal unlucky streak, he struggles to keep his head up and his career moving even as everything seems to be conspiring against him.

One of the curious elements of the brothers, whose films always offer such a strong, singular vision, is how frustratingly inarticulate they get when interviewed about a given project. It’s not that they’re taciturn, or easily irritated at a given line of questioning (although I did once see Ethan comically roll his eyes when asked by an over-aggressive journo where it was he kept his Oscar trophy for Fargo), they just give the vibe of two guys who don’t very much like to probe into the genesis of their work. Here’s Ethan, for example, when asked about where it is he and Joel get their initial ideas for a project: “We just talk about whatever comes up in our conversation. It’s not like picking a subject requires something really specific. It’s just a very, very, very vague conversation that gets progressively more concrete.” And good luck trying to get them to explain some of their more oblique metaphors (we will likely never know, exactly, the true significance of Ulysses, the ginger cat featured in Llewyn Davis).

Still, after a critics screening at the New York Film Festival, they dutifully took the stage along with leading man Isaac and longtime Coens stalwart John Goodman (who has appeared, one way or another, in six of the brothers’ films) and seemed relaxed and happy enough to field questions about the film. Asked first about their propensity to write about difficult, failed characters, Joel issued an answer that might as well be taken as a rough mission statement about their work: “Well, all the success movies have been done, haven’t they?”

There’s certainly no confusing Llewyn Davis as a success story. In their long line of miserably set-against protagonists, Llewyn might well be the most tragic. Barton Fink, for all his suffering, is an egocentric bore who, as pointed out by his friend Madman Mundt (played, naturally, by Goodman) “doesn’t listen” to anyone else for all his affect about being interested in the common man; The Big Lebowski’s Dude has a rough go of it, and his car ends in flames, but by the end, he’s back rolling with his good buddy Walter and seems more than content with his lot; Larry Gopnik (from their criminally under appreciated A Serious Man) might or might not be facing the wrath of God, but seems to have at least resolved the dark storm clouds that have surrounded him for the vast majority of the picture. Llewyn, meanwhile, for all his seeming selfishness and ill temper, is feeling the pressure and pain of understanding that his considerable artistic gift will never be realized or amount to terribly much, simply by dint of bad timing and a streak of truly rotten luck.

The film also brings into question the tortured idea of authenticity with respect to its musicians. Llewyn plays old standards in a deep and soulful way, but constantly seems to lose out to more easily digested folk singers such as the dim-witted Troy Nelson (Stark Sands), or the completely invented Al Cody (Adam Driver), nee Al Milgram from Queens, who has crafted his cowboy folksinger identity out of whole cloth in pursuit of success. This was something with which the musicians of the early New York folk scene really grappled.

“There was sort of a pivot that was happening right around there, in terms of traditional folk music and people who were writing their own stuff,” Joel explains, “and there was sort of an obsession with a certain kind of authenticity, in quotation marks, that had to do with traditional music that the people who were involved in this early folk revival were very concerned with.” At least right up until Dylan showed up singing his own material and his phenomenal success seemed to permanently end the argument.

It’s a major element to the film’s subtext, but in an emotionally striking move near the end, the brothers give us a strong hint as to Llewyn’s attachment to the old standards: We come to learn, in one of the film’s more poignant scenes, that his musical drive comes at least in part from his desire to communicate something, anything, of emotional meaning to his father, a surly, retired merchant mariner who now lives in a union nursing home. His music is their bond, such as it is - as Isaac explains, “that’s how he feels most true to himself, playing old songs.”

In keeping with the air of authenticity that bedevils many of the characters, the brothers also sought to shoot the various music scenes live, not overdubbed as is common practice. So inclined were they toward documentary authenticity, they initially contemplated shooting the entire thing on black and white 16mm stock, a plan they scrapped soon after they began story boarding the script with their director of photography Bruno Delbonnel.

“We found ourselves starting with that idea,” Joel says, “but as we started to break the script down into specific shots, we realized that so much of what we wanted to do from a shot point of view just didn’t lend itself to that. We started thinking we want to follow this cat down the hallway, and the idea of doing that, how we designed the shot is kind of antithetical to making it look like a Maysles brothers documentary.”

The film, then, is shot on glorious 35mm film (the Coens have yet to take the digital plunge though Joel sees it as sort of inevitable: “It’s all one hybrid thing now, anyway,” he says, “because you shoot on film but it goes into a box and goes into a computer and gets heavily manipulated. There is something that looks different with movies that are shot on film, but that’s what’s happening. It’s probable our next movie will be shot digitally.”) which captures the bitter cold essence of that difficult New York winter. Llewyn, who can’t even afford to buy a decent winter coat, trudges through the snow and slush with his brown corduroy jacket and a scarf tied tightly around his throat, but you can’t imagine it does much to keep out the cold of the winter, or the creeping impending doom he feels about his career.

To make a film about the very music scene Dylan eventually came to personify just before the fabled singer/ songwriter arrived there may seem a peculiar choice, but it’s the kind of thing the Coens seem to do better than almost anyone else: Take a subject, however esoteric and subtle, and through the sheer force of their vision and skill, make it into something gripping, moving and unforgettable. As to how they actually go about achieving these beguiling artistic heights, Ethan, speaking about Llewyn Davis, but also offering an inkling into their mystical process itself, remains somewhat less than succinct: “Maybe the [folk] scene itself got us going, but then there was this character conflicted with his tortured relationship to success, and the whole idea of making new crap out of the old crap.Those are little things that are the concerns of characters: not wanting to sell out but wanting to perform and reach people, struggling with the authenticity thing.”

And then, as if anticipating the mounting frustration of this audience of film critics who long to hear meaningful insight into how the brothers build such luminous creations, Ethan quickly makes a small addendum. “I know that’s vague,” he says, laughing, “but it’s informative and compact.”

Print Headline: Ticket to success/Coen Brothers’ latest film follows a recipe that pays off: a hapless man struggling against the odds