2 no votes seen as death blow 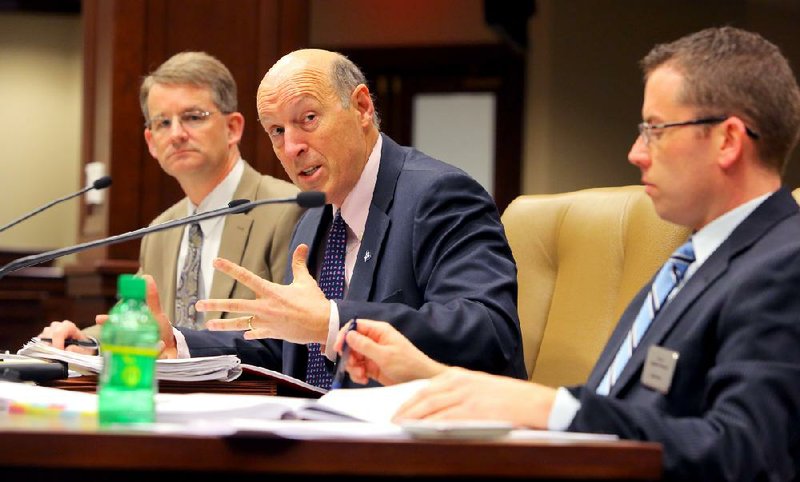 More than 70,000 Arkansans have enrolled for health coverage so far under the private-option program, the state’s Medicaid director, Andy Allison, told the Joint Budget Committee. The federal funding for the private option is available to the state through the Patient Protection and Affordable Care Act enacted in 2010.

If Sen.-elect John Cooper, R-Jonesboro, and Sen. Missy Irvin, R-Mountain View, don’t vote for reauthorizing the use of federal funds for the private option in fiscal 2015 as they’ve said they won’t, “it is dead on arrival,” Chesterfield said after a meeting of the Joint Budget Committee.

“We have got to determine what we do going forward should it not pass,” said Chesterfield, who is a supporter of the program and the vice chairman of the Senate Public Health, Welfare and Labor Committee. “Just maybe something will sweep through here and God will be in his heaven and all will be right with the world and we get [funding] for the private option.”

Authorizing the use of $915 million in federal funds for the private option in fiscal 2015 will require 27 votes in the 35-member Senate,which last year narrowly authorized the funding with 28 votes. It requires 75 votes in the 100-member state House of Representatives, which last year approved it with 77 votes.

Irvin said Tuesday that Arkansas Blue Cross and Blue Shield, one of the companies offering the private plans, has cut reimbursement rates for physician specialists below those for primary-care doctors for services provided to Medicaid patients and others who enroll in coverage through the state, and that will hurt patients’ access and quality of care.

She also said she was disappointed that there hadn’t been more progress with the state’s plans for health-savings accounts for Medicaid recipients.

“I don’t think it’s that big of a deal if this thing goes away,” Irvin said of the private-option program in a telephone interview. “I don’t think it has to be traumatic because it is a new program and no state money has been spent onit. There should be a way to have a wind-down and transition out of this.”

Irvin said her opposition to reauthorizing federal funding for the private option has nothing to do with Heber Springs Republican Phil Grace, a private-option opponent considering challenging her in the May 20 primary election.

Grace, who is director of technology for the Heber Springs School District, said Tuesday that he “was hoping to make enough noise to get her to change her vote,” adding that he’ll probably try to unseat Irvin anyway.

An architect of the private-option program, Sen. Jonathan Dismang, R-Searcy, said other lawmakers have raised concerns similar to Irvin’s and those issues “are being dealt with.”

“Maybe it was a lack of communication on our part …,” Dismang said in an interview. “It was my understanding that she was part of those conversations, but if she wasn’t, then it was obviously my fault as a leader and one that we’ll make sure we communicate more effectively with her about what’s happening.”

He said it’s “a little early” to say the private-option program is on life support.

“I hope we have enough votes to get it through,” he told reporters. “I just think it is a great program. I think it is working exactly like the Legislature asked to build it. Enrollment is above where it should be, so I think it is hard to look it and say here is something that is not working like we thought.”

Selig told the Joint Budget Committee that the department’s proposed budget assumes the federal funding for the private option will continue.

That prompted Chesterfield to ask “Should that Pollyanna-ish notion not hold true, what is your alternative?”

The state’s public schools, prisons and human-services programs would get increased funding under Beebe’s draft $5.03 billion general-revenue budget for the fiscal year starting July 1, which raises state spending by $105.8 million. The governor’s proposed budget factors in an $85.2 million reduction in general-revenue collections stemming from tax cuts enacted by the Legislature last year and up to $89.2 million in projected savings resulting from federal Affordable Care Act funding, including the private option, according to the state’s budget administrator, Brandon Sharp.

The governor’s proposed budget includes a $26 million increase in the Department of Human Services’ general revenue budget to $1.253 billion, including a $13.2 million increase to $903 million for the state’s Medicaid program.

The proposed Medicaid budget, including federal and state funds, for fiscal 2015 is $6.695 billion, up from $5.26 billion, according to a spokesman for the department.

If the Legislature “decides it wants to defund the private option, the primary concern isn’t with the [Centers for Medicare and Medicaid Services] or federal government, it’s the impact in how quickly you want to actually remove that coverage from the individuals who are covered and change the system here,” Allison said.

He said he doesn’t believe that the federal government would file a lawsuit against the state or penalize the state if the Legislature opted against reauthorizing funding for the private option because it has “no such mechanism” and doing so would conflict with a U.S. Supreme Court ruling.

“If we do away with the private option, [the Legislature] would have to decide whether to restore those Medicaid programs and bring all those people back onto Medicaid or have them go without care,” he said.