Authorities in Pine Bluff are on the lookout for a suspect wanted in a recent home-invasion burglary.

Officers were dispatched to a home in the 3100 block of Violet Drive at 9:20 a.m. Monday, according to a Pine Bluff Police Department report.

When officers arrived, one of the home's residents told them that a man had kicked in the door about 2:30 a.m., pointed a gun at her and asked who was in the house and whether she had a security alarm. Several other men entered the house wearing red shirts or jackets and red bandannas over their faces, according to police.

The first man rounded up everyone in the house and gave the other men orders as they went around the house grabbing items including televisions and gaming systems, according to the report.

One of the victims said she recognized two of the men and identified them as “Marquis Williams” and “Jalyen Cobbs,” according to the report. After the items were taken, she said, the men left in a “blueish” Pontiac Grand Prix, fleeing down Howard Drive. The car then returned 25 minutes later and parked, and the man in the car went into nearby home, the victim told police.

Hanley is described as a black male standing 6-feet tall and weighing 195 pounds with black hair and brown eyes. He was last known to live at 1208 Boston Drive, and he was last seen with a Glock .40-caliber handgun. 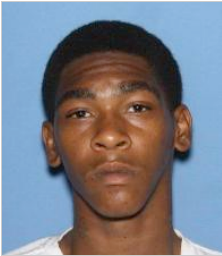